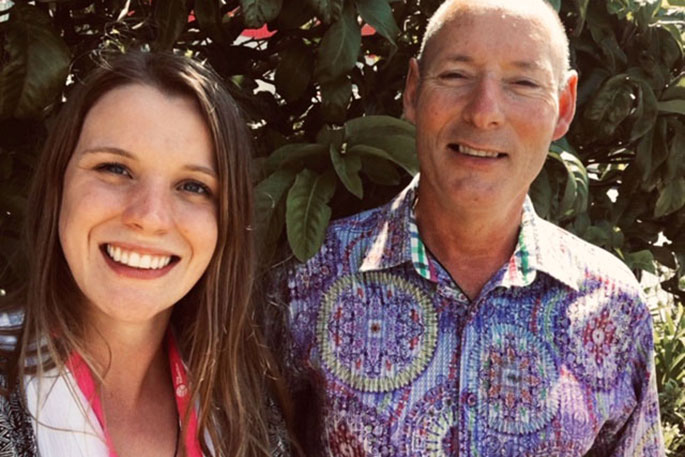 Unable to walk or use his left side, Garry Hamnett’s stroke left him with difficult challenges to face.

While at a friend’s house for dinner, Garry’s face started to droop and his arm became limp. Luckily his friend knew the signs of a stroke and immediately called for an ambulance.

Garry was taken straight to Tauranga Hospital where he received urgent care.

When Garry came around, he found himself in the acute stroke ward after being unconscious for five days.

It was during this time that Garry was introduced to Jessica, a Stroke Foundation Community Stroke Advisor (CSA).

“That initial contact was fantastic. You feel lost when you first find out that you’ve had a stroke and worry about how you’re going to be able to cope," says Garry.

"Jessica shared lots of information about how to manage life after a stroke and helped not only me, but also my family through this difficult process."

Garry completely lost the use of his left side which meant that he was confined to a wheelchair for a number of weeks.

This was a huge challenge for him, as prior to his stroke he was running 5km every day.

“Finding out I would have to use a wheelchair was devastating.

“A lot of people who have a stroke fall into a downward spiral of negativity and at the start, I did too.”

But with Jessica’s help, he was able to regain lost confidence.

“I started to remind myself how lucky I was that I had made it through my stroke and started to think more positively. Jessica was incredibly supportive and offered me comfort when I was feeling lonely. Some people don’t have family support, which is why the CSA service is so important."

With help around him and the confidence and determination to recover, Garry told hospital staff that he would walk out of Tauranga Hospital.

He worked closely with his physio team and Jessica, who gave him the encouragement to keep going and to get stronger.

“My friend said she’d film me walking out of hospital, but she forgot to press the record button, so I actually had to do it twice!" says Garry.

Garry then set an ambitious goal to walk to the top of Mount Maunganui to celebrate being able to walk again and having overcome a huge personal hurdle.

A year after his stroke, he walked to the top of the Mount and now even aims to walk 10km every day.

Garry has even been keeping up his 10kms each day during all the COVID-19 Alert Levels. With his block around 2.5kms long, he has been determinedly making the walk four times a day.

“I know every crack in the pavement now!”

Since his stroke, Garry has learned a lot through Stroke Foundation’s CSA service about simple changes he could make to his lifestyle to better manage his health.

“My stroke really was a wake-up call for me. I never expected to find myself in that situation,” says Garry.

The Stroke Foundation is the only national charity in New Zealand focused on the prevention of and recovery from stroke.

Dedicated to reducing the incidence of stroke, improving outcomes, and supporting those affected by stroke, they provide an invaluable service in our community.

Stroke is the leading cause of serious adult disability with over 9,000 New Zealanders experiencing aa stroke each year, and over 64,000 stroke survivors currently living with the effects of stroke.

With the annual number of stroke survivors expected to increase by 40 per cent in the next decade, the Stroke Foundation’s service is vital to ensuring clients live a full and happy life after stroke.

The charity has been making sure stroke survivors and their families are supported during all the Alert Levels, and has been keeping the public aware of the signs of stroke through online and television advertising.

While Community Stroke Advisors and Return to Work Advisors have not been able to meet with clients face-to-face during Alert Levels 3 and 4, they have kept in touch over the phone and where possible, video called all existing and new clients to ensure that they received the best possible support.

Now at Alert Level 2, the team will continue helping to rebuild the lives of stroke survivors and in some cases, it may be possible for home visits to resume, providing it is safe to do so.

TECT funding was sought by the Stroke Foundation to support the delivery of the free, front-line Community Stroke Advisor services in the Tauranga and Western Bay of Plenty regions.

Cee Kay, General Manager for the Midland Region at the Stroke Foundation ,says they are appreciative of TECT’s $25,000 grant, which will help go towards the operational and salary costs associated with the CSA services, costing almost $190,000.

“Thanks to TECT’s support, CSA’s are able to visit clients in their homes, discuss and develop plans to meet stroke survivors’ needs and achieve individual goals like Garry’s.

“They provide support, information and advice to build knowledge and skills, liaise with stroke clubs, community and recreational groups, and network in the community to ensure stroke survivors, their whānau and carers are getting the right services.

"We are so appreciative of TECT’s funding which allows us to provide a brighter future for stroke survivors.”

To learn more about the Stroke Foundation of New Zealand, visit www.stroke.org.nz.