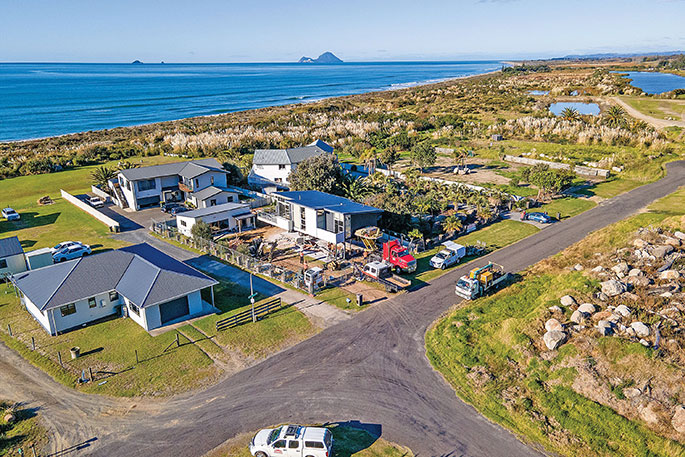 Awatarariki residents are feeling optimistic after taking the next step in the ongoing fight for their homes.

Residents applied this week to the Environmental Legal Assistance fund to help pay for their upcoming challenge in the Environment Court to the Whakatane District Council’s managed retreat.

For Rachel Whalley, who is fighting for her family home, the Environment Court presents the first “fair chance” residents have had in the managed retreat process.

In April, independent commissioners ruled the council’s managed retreat is justified and lawful due to the high risk to life which exists on the fanhead at Matata.

The managed retreat involves making offers on residents’ homes and encouraging them to move ahead of two plan changes which will prevent future development on the fanhead and extinguish existing use rights for those still living there.

It follows a devastating debris flow which destroyed several homes in 2005. but did not cause any deaths.

Rachel says the entire process to date has been unfair as residents don't have access to the same money or experts as the council to support their fight.

The council’s $15 million managed retreat process has been split three ways between itself, the Bay of Plenty Regional Council, and the Government.

She says many felt there was no option but to accept the council’s offer and leave in case they were left with no home and no compensation if the Environment Court challenge did not go their way.

“We are all stressed out through trying to save our homes, there’s a constant knot in our stomachs that doesn’t go away.

“We are scared of losing everything, but, even if we are the last ones standing, it’s about doing the right thing.”

Rachel says the environment challenge isn’t just about saving their own homes, but the home of every New Zealander who might live on the coast, or by a river, on an earthquake fault or anywhere else that authorities might soon deem too unsafe to live.

This is the first time a plan change has been used to force people from their homes and if the council is successful it will set a legal precedence for councils around the country.

As well as applying for ELA funding, residents have created a Givealittle page, E Tu Awatarariki Matata, which has so far raised $1875 towards their fight.

Whakatane councillors Gavin Dennis, and Lesley Immink are listed as having donated.

Lesley’s private donation carries the note “fighting a fight worth more than many other people in New Zealand will realise”.

The donations pre-date their election to the district council.

Rachel says residents have been pushed to the extremes but are optimistic the Environment Court decision will go their way.

“It’s the first truly independent process where we will be able to have our voices heard."

Marilyn Pearce admits she may be a “dead man clutching at straws” in the fight for her Awatarariki home but is keen to take any win she can get – including having a boundary fence reinstalled.

Marilyn’s fence was partially removed last week as Whakatane District Council contractors worked to remove her sister’s home as part of its managed retreat from the fanhead.

“I won’t be railroaded and will fight for every little thing until the end,” she says.

“That fence may not be a big deal on its own, but it’s another example of the council forging ahead with no consultation, no thought, and running roughshod over residents.”

Marilyn and her sister went halves on the $3500 fence, which is made from native timber and rock columns, and runs alongside the sister’s home and Marilyn’s driveway.

“That’s my fence and they think they can just come in here and take it."

Marilyn says the fence is also partially on her section although the council’s Geographic Information System disproves this.

Rather than survey the boundary at this time and following a threat from Marilyn to block in contractor’s trucks, the council asked the contractor to reinstall the timber rail sections of the fence.

The contractor has since completed the work and council staff have apologised to Marilyn.

“It’s a small thing, but I’m willing to take any win I can get at this point,” she says.

“There’s no way I would have let it go, it became a real right or wrong.”

The sisters’ properties were subdivided in 1998 from a large section previously owned by their father.

Marilyn’s home, the original family home, was destroyed in the 2005 debris flow. She rebuilt while her sister’s home was a new construction.

“I heard banging about half past three this morning and the house was on the truck and away.

“Now it’s just a concrete pad and some timber. It is weird, it’s like it’s gone back all those years ago when it was just my parents’ home here. I hope it’s going to someone who loves it as much as my sister did.”

Marilyn says her anger over the fence might have been exacerbated by the fact it is her sister’s home being removed.

“It’s weird when you walk around and see the empty sections where there used to be houses for so many years.

“It’s disheartening, but it is what it is.

How the managed retreat is progressing

Awatarariki residents have now been given until the end of this month to opt into the council’s managed retreat process.

This is the second time the due date has been pushed out.

Fifteen have been settled, three have unconditional sale and purchase agreements, three have accepted the council’s offer and are in the process of signing agreements, five have been through mediation and have requested an independent arbitrator, and one is awaiting a second valuation.

Of these 27 properties, 12 contain homes.

One property owner who owns two properties has not participated in the process and council staff are working with the trustees of another property who are seeking Maori Reservation status for their land.

Frank says the final date for acceptance of acquisition offers had been pushed out again to allow time for members of the Awatarariki Residents Incorporated Society to have second valuations undertaken and to contest these valuations through the mediation and arbitration process.

“The ability to enter into agreements of sale and purchase now, combined with flexible payment arrangements and flexible settlement dates out to March 31, 2021, provide property owners with certainty as well as the financial opportunity to purchase a replacement property in a COVID-19-impacted property market."