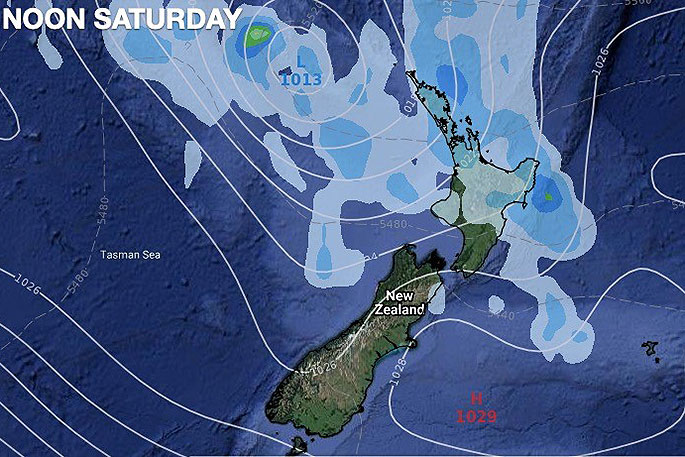 The outlook for Saturday. Supplied images.

The weather is looking a tad wet in the north for New Zealand's first outdoors long weekend since Waitangi Day.

It's great news for farmers with WeatherWatch.co.nz indicating a wetter pattern may be more likely heading into June and through July.

The rain will also be welcome in Auckland where a poorly managed water crisis has become serious and rain this weekend could be the lifesaver Auckland water authorities need to take the pressure of them.

For many others, the timing couldn't be worse with many people desperate to get out of their home and travel somewhere else.

"We have a set up where a sub-tropical north east flow could produce slow moving rain bands over all three days of the long weekend in some northern parts of NZ," says head forecaster Philip Duncan.

"The general rule is the upper North Island has the highest risk of cloud, showers and areas of rain set in, while the lower North Island and much of the South Island leans completely dry or at least drier."

WeatherWatch.co.nz says the further south you go, the sunnier the weather will likely be with Queenstown, Christchurch, Wanaka, Hokitika, Dunedin and Alexandra looking the sunniest. Dunedin may be the sunniest and most settled of all the main centres in New Zealand - a nice victory considering the time of year. 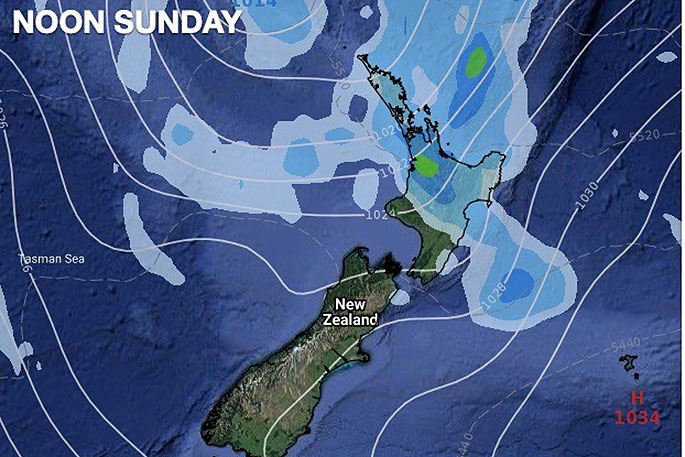 The outlook for Sunday.

Most of the South Island looks dry although a few showers may brush the Nelson and Marlborough regions from the northern rain event, with drizzly showers possibly down as far south as Kaikoura.

Heavy rain may even be enough to prompt rain warnings in the upper North Island, although it's too early to lock anything in.

Highest candidates for heavy rain would be eastern Northland, northern Auckland, Coromandel Peninsula (especially the eastern side), Bay of Plenty and East Cape to Gisborne where latest WeatherWatch/IBM data suggests 100mm is possible in the ranges and mountains. 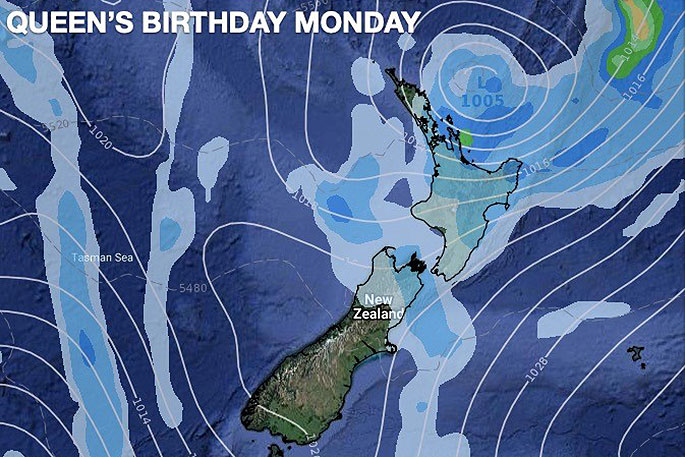 The outlook for Monday.

Due to high pressure further over the South Island there is some chance in the days ahead that the high may push back into the North Island - pushing long weekend rain chances further out to sea and creating bigger dry spells in the north.

Of course, the flip side is that if that high weakens or shrinks at all that could encourage more rain over the North Island.