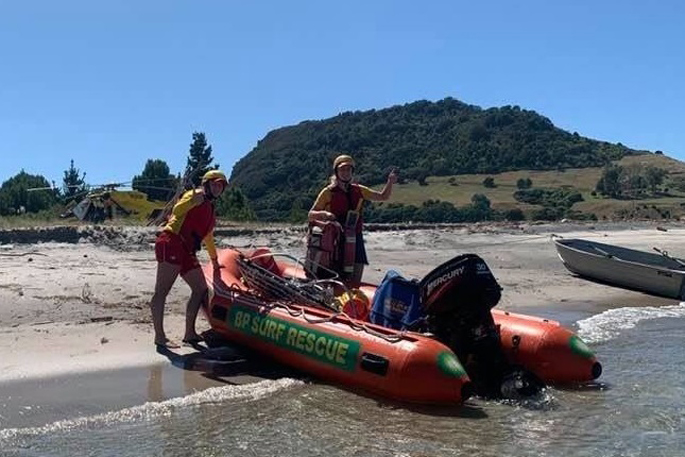 Volunteer Surf Lifeguards and Emergency Call Out Squad members Dani Shepherd, left, and Laura Weston from Mount Maunganui Lifeguard Service were among those who helped get a seriously injured jet skier back to shore. Supplied photo.

Volunteer Surf Lifeguards from Mount Maunganui are being praised for their involvement in the delicate and careful rescue of a seriously injured jet skier near Matakana Island.

The rescue happened 800 metres from shore and because of the man’s injuries it took the Surf Lifeguards 45 minutes to get him back to land.

Their efforts earned them first place in BP Rescue of the Month for March.

Surf Life Saving New Zealand invites clubs to submit their rescues to be judged for the title of BP Rescue of the Month, which acknowledges operational excellence by Surf Lifeguards around the country.

The rescue highlights the need to call 111 in an emergency and ask for Police – they have a direct line to Surf Life Saving New Zealand’s Emergency Call Out Squads.

Volunteers from Mount Maunganui Lifeguard Service were alerted to the March 8 incident at around 9.45am when the club phone rang.

Patrols weren’t due to start until 11am but Surf Lifeguard Russell Reardon was in the club tower by chance and answered the call.

It was a member of the public calling to say that his friend had suffered a serious injury while jet skiing at Matakana Island.

The man was in the water with suspected spinal and head injuries and was being supported by a group of jet skiers who were keeping him afloat.

“Russell and several other club members, who were at the club following training sessions, started putting together rescue craft such as an inflatable rescue boat (IRB), a jet ski, and vehicles, as well as first aid gear.”

Kent (KJ) Jarman arrived soon after and determined the jet ski would be the best way to get immediate support to the patient.

He drove the jet ski and a rescue sled to Pilot Bay and with Daniel Shanahan as crew, they put the craft in the water and went to the scene.

Dani made 111 calls and together with Danny Hart and Laura Weston, they transported an IRB, first aid gear and personal protection equipment (PPE) to Pilot Bay and waited for other emergency services.

An ambulance with an advanced paramedic on board arrived and it was decided the paramedic, Dani and Laura (also a nurse) would head out to the patient in the IRB.

Dani says when KJ located the man, and the people supporting him in the water, the surf was 1.5 metres, with a significant ocean swell.

“At this point they were well out from shore – around 800m.”

KJ decided the patient would be safest in the water and Daniel joined the members of the public in the water keeping the man reassured.

When the IRB reached the group the paramedic did a brief assessment and it was agreed that the best plan would be to place the man on a backboard on the rescue sled and slowly transport him to Panepane Point, the inner harbour part of Matakana Island.

“This process took some time and due to the man’s helmet, the spinal collar the paramedic wanted to use couldn’t fit,” Dani says.

“The members of public, plus Laura and Daniel in the water, did a very slow and safe placement of the man on to the spinal board and then gently moved him up onto the rescue sled.”

Dani says moving the man during the swell movements was “challenging”.

Once he was out of the water, the paramedic placed an IV lure in his arm and gave him pain relief.

As a registered nurse Laura provided “super support” – she had taken control of the man’s head and spine and was seated on the back of the jetski.

She also monitored his level of consciousness and respiration.

“We then slowly began the journey back to the helicopter waiting at Panepane Point.

“As we could not move faster than 5 knots this part of the rescue took around 45 minutes, and several stops were made to top up pain relief.”

The jet ski and the IRB were able to land safely inside the harbour entrance and the rescue helicopter team took over. The man was taken to Tauranga Hospital and found to have significant damage to his thoracic vertebrae which required surgery.

Positively, he had no spinal cord damage.

Dani says feedback from the paramedics was that the cautious handling of the man by everyone involved ensured that the dangerous fractures didn't cause further damage.

She says had the people the man was with attempted to remove him from water it is highly likely he would have sustained further injury.

The Surf Lifeguards involved in the jet skier’s rescue will be recognised with $500 worth of BP gift vouchers for their club.