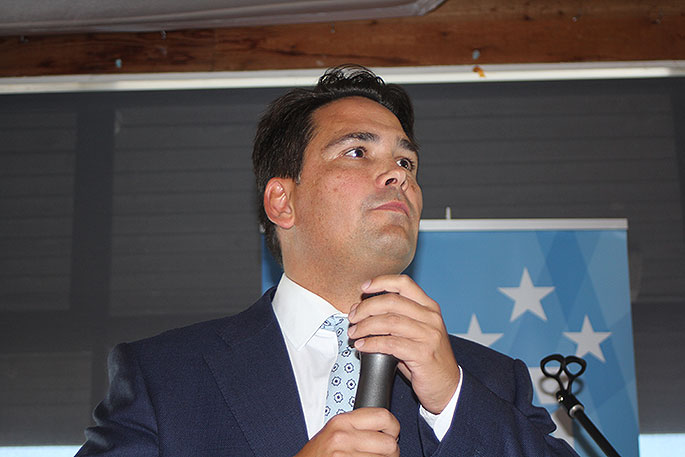 Ousted National leader Simon Bridges says he will stay on in the National Party and stand at the next election.

This news came minutes after his successor Todd Muller announced his new caucus lineup to media, which did not include Bridges, but did include a note saying Bridges needed time to "reflect on his future".

Simon texted Stuff to say he was not in fact considering his future and would stand again in the Tauranga electorate this September, a safe National seat.

"I am not considering my future. Just having a small amount of time out to take stock after the loss on Friday," Simon says.

"I am candidate for Tauranga and intend to stand and help National obtain an historic win!"

Stuff understands Todd offered Simon the Justice role but Bridges rejected this, asking instead for foreign affairs - which he was not given.

Todd said on Monday that he had many conversations with MPs and these should stay private.

He is from the neighbouring Bay of Plenty electorate.

Todd says that Bridges would have a role in his shadow cabinet if he wanted one.

"Former leader Simon Bridges has asked for time to reflect on his future. Should he wish to continue serving as an MP he would be in Shadow Cabinet."

Todd’s caucus reshuffle mostly keeps MPs in similar jobs to those they held under Simon, with some minor ranking adjustment.

But his key backers have been rewarded with vaults up the list, while deputy leader Paula Bennett has dropped significantly.

The rankings are not the party's official list for the election, but are likely to be very close to them.

NZ politics is hilarious. If it’s not Winnie and Shane Jones providing the comedy you have the “Greens” to rely on for stupidity. Then the random clowns like ACT or Conservative. Then you have the big two taking it in turns to show just how disorganised they are. I’ve never seen two more startled rambling wafflers than I saw yesterday from Muller and Kaye. No idea, just policies on the hoof. Well, I say policies, just rhetoric, no details whatsoever. What a joke. And I still haven’t worked out why such a small country needs all these MPs? What do they do all day? What do we get for ideas - cannabis! Brilliant. I think they must all be on it.

...and realistically dumbkof2, Mr Bridges probably knows that now. For good or bad, there is change, and without it in the National Party nothing was going to change, and it had to. We should be able to hope there will be an effective opposition for the sake of democracy, and I applaud Mr Bridges for wishing to continue his roll as elected MP for Tauranga after the upcoming election.

Welcome to the world of "politics" where backstabbing and about turns are "business as usual". This behaviour is "normal" for most political parties, not just National. I was interested to see the SunLive poll is showing Todd Muller (as yet an unknown quantity) preferred as PM over Jacinda Ardern. I’m wondering if the whole of Te Puna was encouraged to take the poll... :-) The point is that unlikely results are usual when it comes to "politics"... (Note to SunLive: Could you show the total number of people who have taken a given poll, so we can assess how realistic the percentages are, please?)

A lot of We have done in the past or We will but when asked about detail of what their plan for Covid 19 was and how much money they would have borrowed there was no detail given.Are we just going to get the same old rhetoric and spin under this new Leader.We need an itemised plan on how and not all this fluffy stuff.

with all the backstabing and turn coating going on i have lost all faith in the nat party. just jobs for the boys.