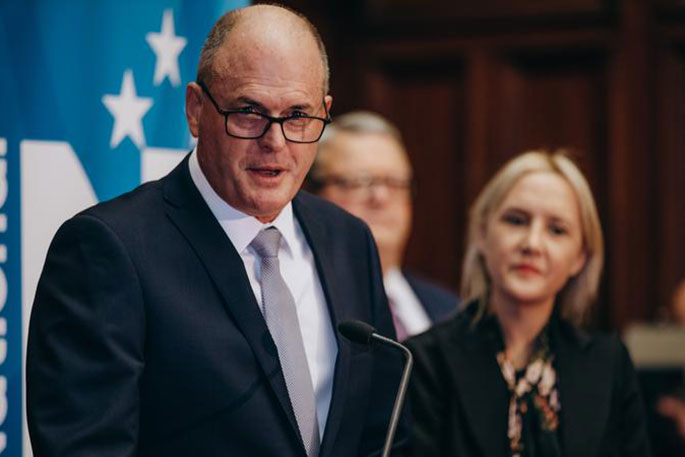 New National leader Todd Muller is wasting no time putting his stamp on the party's front bench with a caucus reshuffle expected to be unveiled today.

Shortly after taking power on Friday, Muller told media his team would spend a few days "reflecting" before making any changes.

It's understood Muller spent last night contacting MPs to tell them their fate, keen to put the matter to rest before Tuesday's regular caucus meeting.

Paul Goldsmith is the only MP publicly confirmed as keeping his position as finance spokesperson in spite of his close allegiance to ousted leader Simon Bridges.

It's a sign other Bridges' loyalists Todd McClay and Michael Woodhouse are not necessarily in line for a significant demotion, particularly given their ministerial experience.

High-profile MP Judith Collins can expect a hefty portfolio in return for her presumed backing in Friday's vote.

Muller is also making swift changes to the party's campaign team and strategy with an eye on the election just four months away.

RNZ has been told senior MP Gerry Brownlee was top of Muller's list to be the new campaign chair to replace former deputy Paula Bennett.

With the situation in flux and moving quickly, the positions may not yet be finalised, but Muller's staunch supporters Chris Bishop and Nicola Willis were also expected to sit on the team.

Muller was said to be keen to put Selwyn MP Amy Adams - who unsuccessfully ran for the leadership in 2018 - in charge of policy development.

In June last year, Adams announced she would quit politics at the election, but there has been speculation she may now go back on the list.

Hooton last week gave his full-throated endorsement to Muller on various media - including RNZ - but yesterday confirmed he would step back from giving commentary due to his conflict of interest.

The staff supporting National's leadership are also set for a shake-up: Bridges' chief of staff Jamie Gray and chief press secretary Rachel Morton have both left and a handful more are expected to follow.

RNZ understands lobbyist Megan Campbell was being lined up to take over as Muller's chief of staff.

Campbell worked in the Opposition leader's office from 2000 to 2003 before going on to eventually work for government relations firm Saunders Unsworth and National's pollster Curia.