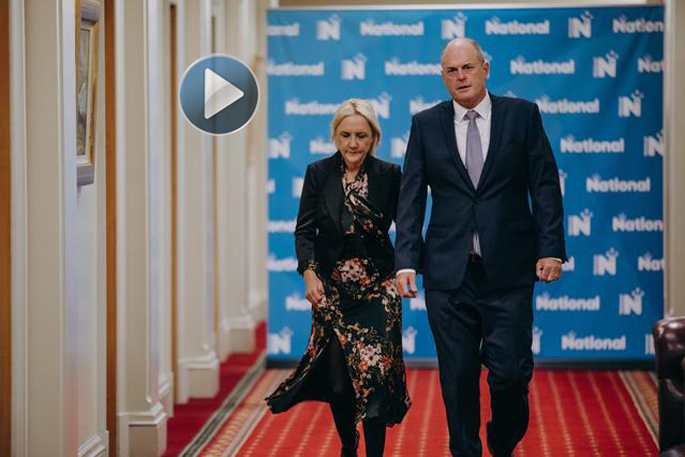 He has addressed the media for the first time as the newly elected opposition leader.

Todd has been elected leader after a closed caucus meeting held earlier today ousting Simon Bridges for the top spot.

"First and foremost I am about what's best for you and your family, not what's wrong with the government.

"I'm not interested in opposition for opposition's sake. We're all tired of that kind of politics.”

“The economy in your community, your job, your main street, your tourism business, your marae, your local rugby league club, your local butcher, your netball courts, your farms, your shops and your families. And this is the economy National MPs are grounded in."

He says he doesn’t believe the government has the right management skills at the moment.

Labour has failed against every measure they have set for themselves, light rail, Kiwi Build and child poverty, Todd says.

He says he is the first to admit the Government’s handling of the COVID-19 pandemic in New Zealand was impressive.

It is time for New Zealander’s sacrifices over the past few months because of COVID-19 to be repaid, Todd says.

"You have put a lot on the line to get us through this crisis and now we must begin taking another step forward to rebuild our country, to rebuild our economy, and to restore the livelihoods of New Zealanders.

"Only a National government can provide the leadership to do that. That is why we must win the next election.

"We should all be proud of what we have achieved together. COVID-19 has hurt us. My absolute focus as the National Party leader will be New Zealand's economic recovery.

“What we have as a National Party is talent. This team will pull together a set of policies that New Zealand will relate to come September.”

"Simon has worked hard as leader and has given the job his all. Both he and Paula have served the country well."

EARLIER: The new leader of the National Party Todd Muller and his deputy Nikki Kaye are speaking at a press conference at 2.15pm today.

The leadership challenge came after two polls, one putting National at 30 per cent and the other at 29 per cent - numbers not seen since the early 2000s under Bill English. Labour's party vote skyrocketed to a record 59 per cent.

Simon also took a dive in the preferred Prime Minister stakes, dropping six points to five per cent, against Jacinda Ardern on 63 per cent.

“National has always been a coalition of city and country, business and community, conservatives and liberals – National is the party for all New Zealanders.”

Who is Todd Muller?

Until this week the name Todd Muller was unfamiliar to many outside of the Bay of Plenty region.

Today, he has stepped up to wrestle the leadership of the National Party from Simon Bridges. So who is he?

The Bay of Plenty MP's expertise is a mix of agribusiness management with some of the country's highest profile companies, and behind the scenes parliamentary experience.

Before becoming an MP in his own right, Todd had a front row seat to the leadership of the country for three years, serving as executive assistant to then-Prime Minister Jim Bolger in his second term between 1994 and 1997.

After his first taste of politics Muller became an industrial relations manager for Zespri from 2001, then a general manager for their corporate and grower services, before taking the helm as chief executive of Apata Ltd, a Bay of Plenty post-harvest kiwifruit and avocado supplier.

Next he worked for Fonterra as local government and regional relations manager, and then as director of cooperative affairs, while also serving as director of the New Zealand Sustainable Business Council.

So what does Tauranga think of Todd Muller?

Todd was elected as a new MP for the Bay of Plenty in 2014, as part of the John Key-led government.

In his maiden speech in Parliament he presented himself as a family man, who represents the values of his community and hard work.

His earliest interest in politics grew from his parents expensive purchase of a 1978 World Book Encyclopedia, which enthralled him with the histories of American presidents.

"I devoured those books... it fired my imagination to such an extent, that I saw myself as a future United States president."

Closer to home, his grandparents Henry and Eileen Skidmore demonstrated to him the "power of deeds" to transform a community, during their almost 60 years as mayor and mayoress of Te Aroha.

"Family, faith and community were at the core of their lives. They demonstrated how selfless service not only enriches those who receive it, but for those who give it, enables a life that has distinct meaning," he says.

"I've always wanted to serve my community, and for me the vehicle for that service is the National Party. I believe the National party philosophy speaks to the aspirations of the families of the Bay of Plenty and the values of our country."

He pledged his focus in Parliament would be on building a society where people are rewarded for hard work, given opportunities for development, treated with respect in their old age, and where tough deterrents against crime provide personal security.

In April, Todd talked of a country where "hard choices" would be among the steps necessary to recover from the Covid-19 hit. And where many urbanites are not aware of the pressures farmers face.

He talked of an agricultural sector "feeling under siege, struggling to see how they could navigate an increasingly fraught regulatory environment," but that would be key to economic recovery.

"Our capacity to produce diverse food products be it dairy, meat, kiwifruit, wine at scale, with sublime quality assurance gives us a strong platform to build from."

Jim Bolger has backed Todd's bid for the National Party leadership, saying his former colleague's skills and knowledge - and in particular his agri-business know-how are invaluable.

"[He] worked in my office when I was prime minister, worked with me as a councillor on the university council at Waikato. He's a businessman of significant experience.

"Going forward the number one issue for New Zealand, in fact the world, is how do we get economies up growing again, employing people and producing goods. That's really where one has to say Todd's experience has been before he entered Parliament. He's been the agricultural, primary industries spokesman now for National."

Former National Party press secretary Ben Thomas has told RNZ that while Toddr is "no Jacinda Ardern", he may be able to help the party recoup some voter confidence, by representing the party's traditionally perceived strength as "stronger economic managers".

RNZ political editor Jane Patterson says Todd has a low public profile in New Zealand, but is "smart and affable", and has been seen as working hard in his role as National' agriculture spokesman.

Former National Party MP for Tauranga, Bob Clarkson, says Todd has leadership potential, but was surprised he was stepping to the front spot so soon in his political career.

"There's not much to talk about Todd. We knew he might be a leader in the future but not this soon. He's a good guy, a good businessman. I think he'll do a good job if gets the post."

Muller is giving a predictable spiel, economic recovery he will have to do better than that if he hopes to succeed we need facts, not blanket statements.

Good luck but we have heard about the track record but some of it does not show up as good but slack in health education and housing Etc.