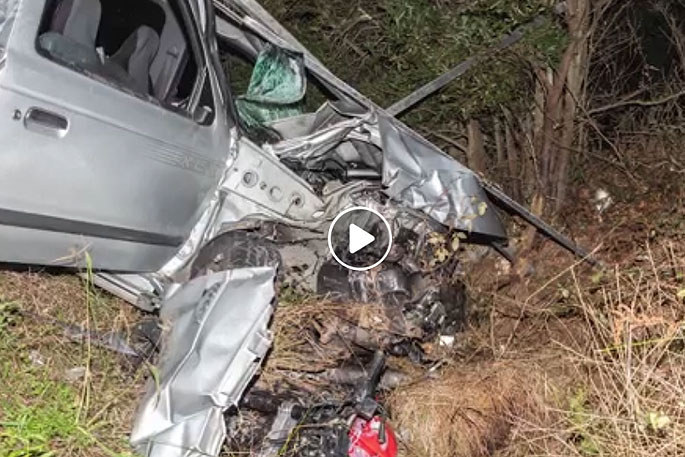 A screenshot from the video released by police.

The family of a man who was killed by a drunk and drugged driver have spoken out about their ordeal in a bid to stop others from getting behind the wheel while under the influence.

Stephen McPherson, 36, died after he was hit by a vehicle while riding his motorcycle home on Helvetia Road, Pukekohe, on May 24 last year.

The vehicle crossed the centreline and its driver was nearly three times over the alcohol limit, and high on methamphetamine at the time, says a New Zealand Police spokesperson.

Tragically, Stephen had been planning to start a family with his partner of 13 years, Rebecca Smidt, and had been to visit an IVF clinic earlier that day to further the process.

In an emotional video released by police, Rebecca, along with Stephen’s mum Sue and sisters Jane and Nicola, issue a heartfelt plea for people to think of others before getting into their vehicles.

“That decision the driver made to drive drunk and on drugs has changed my life forever,” Rebecca says.

“There was the before me, and there’s an after me, and it's horrendous….

"I wish I died that night instead of Stephen and quite often I think that, because it’s no way to live, without him.

"That driver ruined our dream of having a family, alongside many other dreams.”

The driver was so drunk and drugged he had to be told by hospital staff that he had hit and killed Stephen, says police.

Stephen’s mum Sue says the driver was incredibly selfish for not thinking of anyone else but himself before getting in his vehicle.

“You feel cheated, you feel robbed, you feel that nothing will ever be the same anymore,” she says.

The driver was charged with driving dangerously causing death, causing death while driving with excess breath alcohol and causing the death of a person while in control of a vehicle while his blood contained a controlled substance.

He pleaded guilty and was sentenced to two years and eight months’ in prison.

But for Stephen’s family, his sister says they were handed a life sentence the day Stephen died.

“He [the driver] gets to have his own life, his own kids, his own family.

"We’ve had that taken from us."

“It’s not just your life that you’re risking, it’s someone who is completely innocent, who doesn’t deserve it.”

Stephen’s family hopes by sharing their story, it might deter other people from driving under the influence of alcohol or drugs.

“You just destroy a lot of lives, not just the person who you’ve killed, but their families, their friends, the future of all of those people as well, we just want people to think about that,” Stephen’s sister Nicola says.

“We don’t want anyone else to go through this, it’s just beyond words to describe what it’s like.

"Everything will never be the same and one really important person in your family is not there anymore and it’s really, really hard,” she says.

Constable Lisa Ross, from the Counties Manukau Serious Crash unit, says drugged and drunk driving makes up an average of 30 per cent of all road deaths.

She says the number of drivers taking unnecessary risks by drinking and taking drugs on the road is extremely disappointing.

“The video says it all …the impact of one person’s actions on an entire family is so tragic.

"Nothing will ever bring Stephen back, and the family are so incredibly brave in speaking out.

"The risks of taking alcohol or drugs before driving are demonstrated in this video and too many people continue to do so.

“We hope that this reinforces the message not to drink and drive or use drugs before driving.”

Police want to thank Stephen’s family for allowing us to tell his story in bid to help prevent others from going through what they have.