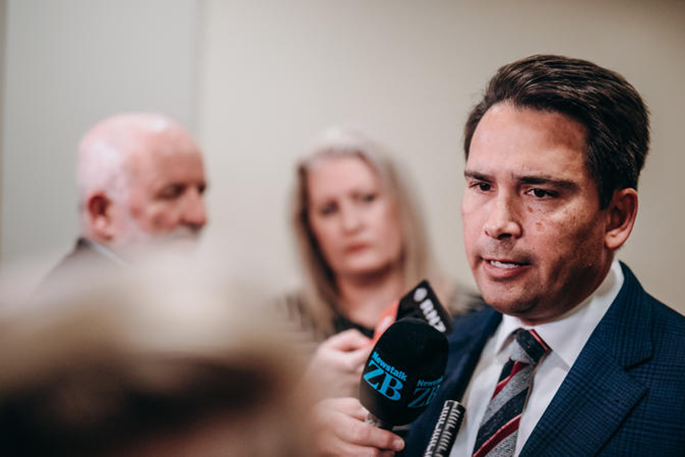 Simon Bridges and deputy Paula Bennett will be challenged for the leadership of the National Party.

Bridges' position is under scrutiny after a political poll showed support for National had plunged.

He told Morning Report he and his deputy, Paula Bennett, are being both challenged, and he's confident he has the support of the majority of caucus.

He will not say who the two challengers were.

The leadership vote is likely to be at a caucus meeting next Tuesday.

The latest Newshub Reid-Research political poll has National with just 30.6 percent support, and in the preferred Prime Minister's stakes Bridges is on 4.5 per cent.

At the same time Labour and Jacinda Ardern are enjoying a huge surge in popularity.

"He's well educated, he doesn't swear like me. So I think he's a decent sort of guy, actually," says Bob.

"He might not pick the right subjects to talk about sometimes but generally, I think he's a nice guy. He's a family man and everything.

"But the leader of the Labour Party has had a charmed run as a politician - she's on the TV 90 per cent of the damn time, and that's hard to beat."

Some voters in Bridges' home suburb of Matua concede National's leader has made mistakes but, for the most part, they're forgiving.

"Aside from what I believe was a mistake very early on in the pandemic when it became a little political, I think he's done very well," says one man.

"I guess a lot of the things that the government's done and proposed probably aren't too dissimilar to what National would have done. He just really hasn't done a very good job of - if there's an alternative - getting that across," says another.

One Tauranga voter says he can come across as "a bit bombastic".

"Oh my goodness, just speak to someone - you're not speaking at someone all the time and always having to get your point across. He doesn't seem to listen very well," she says.

"I don't always like what Jacinda Ardern does, but because she comes across as genuine I think that's what makes her the winner."

In the safe National seat of North Shore, it's hard to find anyone with a positive thing to say about Bridges.

"I'm a long-standing National voter and I wouldn't vote for him. I like the ol' Crusher," says Marjory, with a laugh, referring to National MP Judith Collins' nickname.

Peter Bedford says one of Bridges' problems is that he isn't memorable.

"Three of us were talking the other day and none of us could remember his first name, which is quite brutal."

Bobby Barker from Devonport says Bridges seemed to like being the contrarian.

"I think he doesn't really have any opinions of his own - his opinion is whatever is the dissenting opinion. I don't think he's once come across as honest or anything, just disingenuous."

Rose Hunt from Takapuna says she "just can't listen to him".

At the party caucus next Tuesday, MP's are likely to decide whether or not to topple their leader.

"Todd has the ability to work well with all across world, across the line. He's not that harsh partisan position, he will work with others to achieve the right goal," he says.

Simon Bridges and his party are now faced with crucial decisions three months out from the general election.

....but for Mr Bridges and Ms Bennett to step aside for probably both positions, after all I would say if the same duo stay, what will the probable outcome be at election time?..more of the same surely..an absolute landslide, like it or not.....

I like Simon. I’ve liked him ever since he appeared on my doorstep when he was campaigning against Winston. We talked for about 20 minutes and he answered my questions honestly. He is a decent man who genuinely cares about our country. We could do a lot worse. But Politics does things to people. The adversarial legal background that Simon is used to is not always the right way to persuade people. Sniping at "the enemy" is not something that most Kiwis approve of. If you have an issue bring it out. But be prepared to acknowledge when the other side gets it right as well. We saw both sides working together in the early stages of the Pandemic and it was refreshing and uplifting. Opposition HAS to oppose, but it should do so fairly and clearly. Jacinda is a very hard act to follow. I don’t envy Simon.

I think when 2 former Prime Minister’s from the National Party are promoting someone else whilst their is a current leader of the Party says it all.He needs to do the honourable thing.He has taken the party from around 46% down to around 30% and his own poll down to 4.5%.Not good is that.