Boat ran aground as skipper and deckhand slept 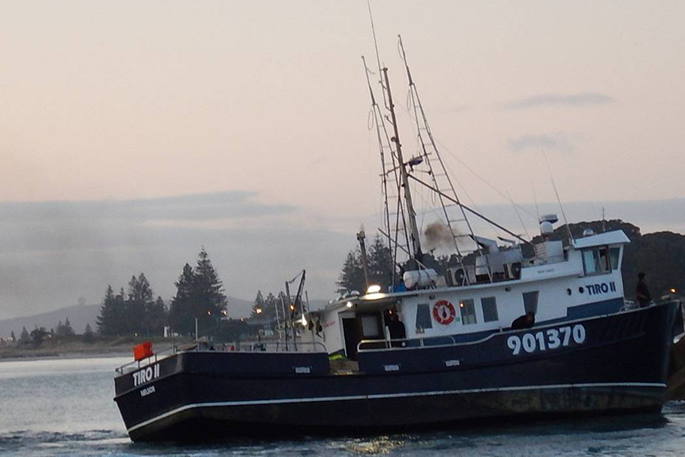 A fishing boat ran aground into Mount Maunganui while being operated by a crew member on his first sea voyage, who was supposed to have awoken his sleeping skipper but fell asleep himself.

The boat, a long-line fishing vessel, was returning from an eight-day voyage, according to court documents.

The boat's skipper had 18 years of experience. He was joined by a deckhand who had never been to sea before, another deckhand with four years' experience, and a Ministry of Primary Industries observer.

On the afternoon of August 15, the boat had concluded fishing operations and was about 90 nautical miles from the Tauranga Harbour entrance.

At about 10pm, the skipper instructed the newbie deckahnd on how to maintain a course and how to operate the boat. The skipper then went for a sleep, telling the deckhand to wake him up if the weather changed, if boats came within three miles of the boat, and definitely no later than midnight, so he could guide the boat into port.

But at midnight, the deckhand decided to stay on watch and to let the skipper get more sleep. Then the deckhand himself fell asleep.

They all woke up when the boat ran aground on North Rock, at the foot of Mount Maunganui.

The skipper notified Maritime NZ, then waited for an incoming tide before successfully re-floating the boat at 7.30am.

Following the incident, Maritime NZ charged the skipper with operating a vessel without a maritime engineer aboard and for operating a ship outside its prescribed operating limits because on the voyage he had fished outside the 100 nautical mile limit.

The skipper appeared in Napier District Court on Tuesday, May 12, after pleading guilty to both charges. Judge Gordon Matenga sentenced him to a fine of $3200.

In earlier proceedings, the deckhand pleaded guilty to operating a ship in a manner that caused danger and was fined $1700.

Ocean Venture Ltd pleaded guilty to operating a vessel without qualified personnel and in December was fined $10,000.

… goes unpunished. The kid was trying to do the Skipper a favour; the results were unfortunate. The sea, as anyone who has regularly sailed can attest, is a hard mistress. It seems that no-one was hurt and the boat was re-floated OK. The non-compliances are a different matter; the fines are probably fair although they could have been a bit more lenient with the deckhand; $1700 for falling asleep (without causing damage to any other person or vessel) seems a bit steep to me, but I’m sure he won’t ever do it again.

With all this unlawfulness was the vessel itself Maritime compliant. Somehow I doubt it very much. Perhaps more charges should be forthcoming . . . just saying . . .