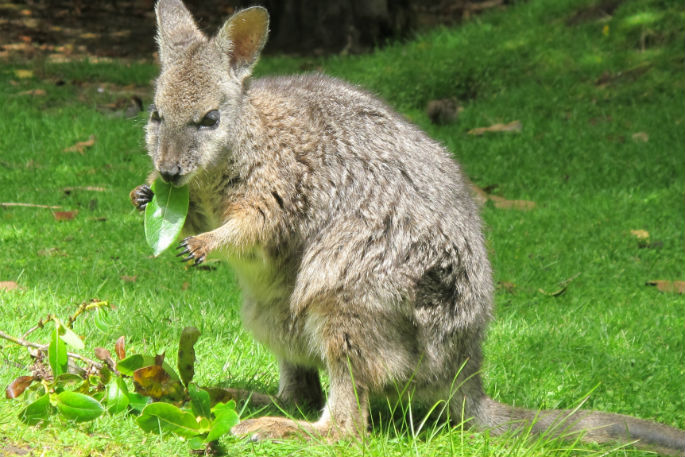 $27 billion is being spent to cull wallabies in the Bay of Plenty, Waikato, Canterbury and Otago. Supplied image.

Will former air stewards, bar tenders and tour guides be lining up to shoot wallabies and fell wilding pines in the wake of Covid-19?

In the Budget the government announced it will spend $1.1 billion creating more than 11,000 jobs in pest and weed control.

$27 million of that is to cull wallabies in the Bay of Plenty, Waikato, Canterbury and Otago.

It is also investing more than $19 million in a range of initiatives to help people recently made redundant into about 10,000 primary sector jobs.

"We'll have people on the ground, we'll have to do some poisoning and do some monitoring," Agriculture Minister Damien O'Connor told RNZ’s Checkpoint.

"We estimate up to 1.5 million hectares in the South Island and up to half a million in the North Island around the Bay of Plenty is infested with wallabies.

"It's an increasing problem that needs to be controlled as quickly as possible."

"It may be 1080, I'm not an expert at killing wallabies, but getting people who are used to the outdoors, used to pest control, used to getting out around the hills and working with farmers, those are the jobs we'll be creating."

In the Budget Day announcement, Conservation Minister Eugenie Sage said the Department of Conservation will work with councils, iwi and local businesses such as tourism operators to provide nature-based jobs.

Damien told Checkpoint "anyone who feels a passion for pest control or working outdoors" is welcome.

"A lot of people in the tourism industry are used to working in the outdoors and want to remain there. So I'm sure there'll be a good pool of people.

"These jobs will be highly-skilled jobs and I'm not the one to write out the wages other than to say I'm sure people who do this will be getting more than the average person across the tourism sector."

The $27 million funding will cover monitoring poison, health and safety issues with many people working probably with guns, says Damien.

That's the reality of these programmes. It's better to do it now than in five years time when the numbers of animals might have doubled.

"There'll be helicopter pilots who'll be doing boom spraying of areas where you've had very high concentrations of wilding pines. From helicopter work right down to people on chainsaws, people pulling out small seedlings - it is quite a labour-intensive job.

"Again a stitch in time saves nine and we know every year that goes by that those trees and seedlings get bigger, it's more expensive to control them."

Damien is confident such pest control jobs will be filled. "People enjoy the outdoors, what they need is a good solid income, rewards for their efforts.

"I don't think everyone wants to sit at a desk behind a screen. There are a huge number of Kiwis, particularly those connected to tourism, who actually want a connection with the outdoors and activity. This will satisfy many of their expectations as long as they can get decent money for it."

How many migrant workers is New Zealand short of in the primary sector?

"It's always hard to get an accurate number, there are estimates of up to 70,000 people or 70,000 temporary work permits of people employed in the primary sectors.

"People come and go during the year, some of them cross over from one sector to another. It's a bit hard to really pin it down but what we do know is less of these people will be coming to New Zealand, some here will have their permits rolled over, but some will want to go home.

"That will leave us short of people to do the necessary jobs, particularly those connected to seasonal patterns – pruning, picking, harvesting.

"Dairy estimate they need 1,000 people before the end of June. We're working actively with them at the moment to not only get a campaign but to open up taster courses to ensure anyone interested has a pathway back into a good job."

The high number of migrant workers in the primary sector has been due to the lack of New Zealand citizens taking up such jobs. Damien says the "harsh reality" is for many New Zealanders now there are not many options for employment.

"So the opportunity to earn a decent income, it may not be in their profession of choice, job of choice, but some might think it's worth a go.

"I think employers and farmers have got a lot better at respecting the value of workers that come onto their places.

"There is a way of connecting. Talk to some of those people who got awards for good employers across the primary sector… when you talk to them, they don't have a problem attracting and retaining hard working and inspirational Kiwis."

I agree this needs to be done but I don’t agree with still using 1080 to do it!

There is a group of these pests in the valley between Mitre 10 and Landscape Road. If not got under pest control, this group will spread to a broader area of Tauranga

What a great idea!

NZ used to have a government department that took care of these kind of problems. Unfortunately, successive government reduced its funding to the point where it became almost useless. I do believe that it was known as the Department of Conservation.

I don’t think crawling about in the bush and shooting things in the face will be their cup of tea.

with so many gun nuts in NZ it makes sense to make good use of them. we are going to shoot our way economic rock stardom. yee haw.