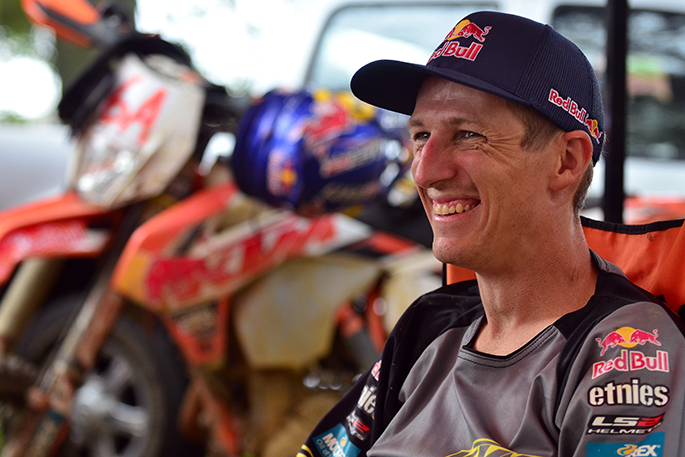 When you have an international sporting career as long and illustrious as New Zealand's Chris Birch, you could understand that it would be hard for him to identify just one special moment.

But, with plenty of time to contemplate with the Coronavirus COVID-19 pandemic lock-down curtailing any real sporting ambitions in the short term, the now Thames-based former Glen Eden man was able to weigh up an answer to the question "Tell us Chris, what was your best race ever?"

KTM rider Birch is an internationally acclaimed enduro racer and off-road coach of many years' standing and, during the lock-down, he has been creating informative videos from his garage at home, free "Say No To Slow" tutorial clips to satisfy his many dirt bike fans.

His achievements at the ultimate level of motorcycle racing worldwide are testimony to his outstanding riding talent, his knowledge of the sport and all its intricacies.

The now 39-year-old Birch won the New Zealand Enduro Championships staggering eight times, his latest achievement being when he won it three times in a row, in the 2013, 2014 and 2015 seasons.

He has been on the podium seven times at the world famous Red Bull Romaniacs event in Romania and he won it outright in 2010. He has competed successfully in the world’s biggest enduro races such as Erzberg extreme enduro, Red Bull Last Man Standing, Hell's Gate, the International Six Days Enduro, World Enduro Championships and European Enduro Championships too.

Since competing in, and finishing, the Dakar Rally in 2012, Birch has developed a following in the adventure bike world, and he is one of KTM’s highest profile adventure ambassadors worldwide.

There are many illustrious race wins that he could proudly dwell on, but just what was his greatest single race ever?

"My stand-out best race ever was the Roof of Africa enduro, way back in 2008," says Birch.

"I had received several emails from a South African guy called Mark who was trying to convince me to come to South Africa for the event. I kept telling him I couldn't afford it, but he kept telling me to try and find a way.

"I figured he thought I was trying to fob him off, so I took a screenshot of my $4 bank account, emailed him that and everything went quiet for a few months.

"Then, one day I got another email and he told me he had everything sorted if I could just get myself to South Africa.

"When I got to South Africa, Mark had done something incredible. He had harassed all his mates into sponsoring me through their respective businesses. A bearings wholesaler, a pet shop, a liquor store, a slumlord and the local KTM shop that described themselves as 'a drinking team with a riding habit'. We borrowed a 2008 KTM 300 EXC and headed off to Lesotho.

"The first day of the Roof of Africa is the time trial, a 100km stage in the lowlands that's pretty fast and flowing. As soon as we got out to the start area there were huge flashes of lightning and it started pounding rain and hail. I couldn't have been happier as it made it just like riding in Riverhead Forest (west of Auckland), but with rocks instead of tree roots. As soon as I set off, I started passing riders.

"Back then, the South African guys had no clue how to ride in the mud and I was giving them a lesson. I won the time trial by about 12 minutes.

"I remember half the team being stoked and the other half looking a bit put out. They were here to drink, not race, and the skinny Kiwi was messing up the plan!

"Day two was a marathon. Eight hours of rocks, mountains and adventure. I started off first, put the hammer down and never saw another bike the whole day. It was such an adventure, we were in huge mountains, riding on the edge of cliffs, up valleys and along never ending goat paths. I won the day by 45 minutes.

"The last day was another seven hours on the bike and another huge physical challenge. I knew I had the pace, I just needed to not make any mistakes and for my body to hold.

"With only a few kilometres left to go, I had a big crash in fourth gear. I bashed my elbow and bent the bars, but there was no way I wasn't going to get to that finish line. I was completely exhausted, emotional and happier than I had ever been crossing that line.

"The guys were there already, beers and brandy flowing fast and together the 'drinking team with a riding habit' and I won the Roof of Africa. Mark was in tears and, to be honest, so was I.

"It was the best race ever. Also best after party ever ..."