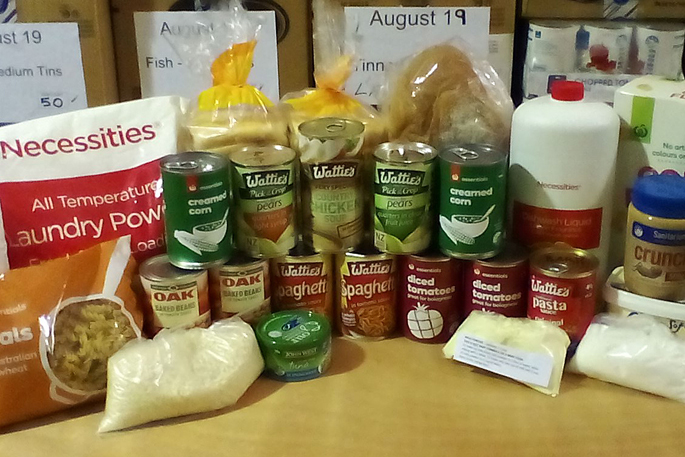 Some of the items included in a food parcel, sausages, chicken, frozen vegetables and meals are also added. Supplied Image.

Social services fear some of their funding sources are about to dry up, just as more people need help amid the fallout from COVID-19.

Since the alert level four lockdown, foodbanks across the country have been busier than ever, but community organisations are anticipating many more months of increased demand for food and other services, as unemployment worsens.

After years of under-funding, they are pleading with the government for more help in Thursday's Budget.

General manager of Empowerment New Zealand, a one-stop shop for social services in Te Puke, Scott Nicholson says they would usually hand out between 30 and 50 food parcels a month.

But over the last six weeks, they have handed out about 330.

"This is usually a fairly quiet time for us during the kiwifruit harvest, but what we have been seeing is we've been doing a week's worth of parcels every day."

"A lot of the people seeking help at this time are first-time users of any social services and many of them are just overwhelmed with that - they've never had to seek help before and they don't even know where to begin."

With unemployment expected to grow, social services are bracing for even more people needing help.

But that comes as strain is being put on their finances.

A recent survey of organisations in Western Bay of Plenty found just more than half of them were already experiencing, or were anticipating, a reduction in funding because of COVID-19.

Umbrella group Social Link general manager Liz Davies says that was because they could not fundraise as normal, or rely on their usual grants from gaming trusts and other sources.

"It's a bit of a perfect storm really, facing reduced revenue and increased demand and that's on top of the fact that the sector is already under-funded."

An independent report commissioned last year by Social Service Providers Aotearoa found they were already under-funded to the tune of $630 million a year.

Liz says when you factor in the impact of Covid-19, it was crucial the government stepped in with more support.

"While we have got to look at economic recovery, we need to look at how do we support the people who have become unemployed to stay connected in their community, to get education and training, to get the income support that they need to be able to live.

"It's going to be hugely important that they're able to access these services."

While some government funding has been announced during the lockdown to help get food and other essentials to people in need, Council of Christian Social Services executive officer Trevor McGlinchey says that is really only enough to keep up with the short-term spike in demand.

"We're going to see such a huge increase in numbers of people on benefits, and the numbers of people that perhaps used to have two incomes and they're now reduced to one income, and others who have their over time and other things docked as well."

As the pressure mounts on those people in the coming months, many of them will need help from social services for things like counselling and budget advice, says Trevor.

Back in Te Puke, Scott says a drop in funding would make it difficult for them to maintain their usual services, let alone cope with an increase in demand.

"It will change the face and the nature of what we do and obviously depending on how bad things get, it may affect staffing levels as well."

Social service providers from across the country have already written to government ministers outlining their case for increased funding.