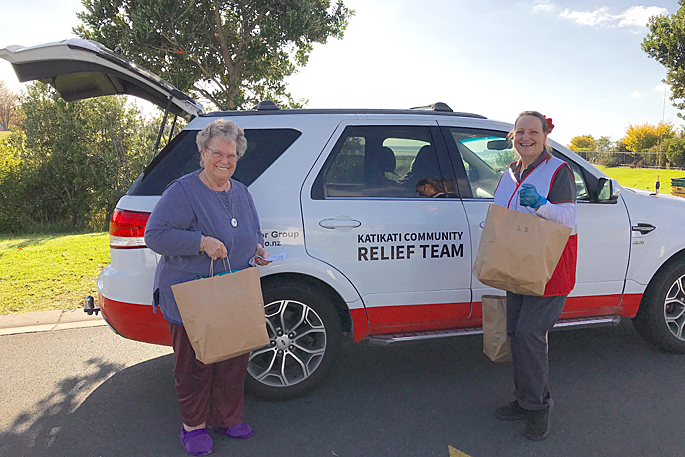 For the past five weeks a unique personal shopper scheme has been operating in Katikati, ensuring its most vulnerable residents have received the groceries they need during the Covid-19 lockdown.

The Secure Shopper/Delivery Service, a Katikati’s Community Services Covid-19 Response team’s initiative, co-ordinated by Katikati Taiao began on Thursday April 9 when it was identified many residents could not go out to shop or use on-line shopping and banking.

Throughout the following weeks housebound residents, including those over 70 years old; solo parents or people with a disability or medical reason which restricted them being able to get their groceries, were delighted to receive home deliveries with a smile.

Katikati Taiao took the lead in co-ordinating the shopper service, which was an immediate success thanks to the willing co-operation of Katch Katikati, Katikati Community Centre, NZ Red Cross and Countdown.

The process for those who qualified, began with a shopping list emailed or phoned to Laura Te at the Katikati Community Centre.

“Most people were able to send email lists or have someone prepare a list for them. Others phoned their lists to me and I loved talking to them,” says Laura.
“Sometimes I went out to pick up lists from letter boxes. It was no problem. I was happy to make sure people had the food they needed.”

Laura compiled the lists which were sent to shopper Daniel Wilks, who created a spread sheet to streamline shopping. “I put the items in order of where they are found in the supermarket, with vegetables first right down to frozen goods at the end,” says Daniel.

“This meant I could go down the aisles and get everything without doubling back.”

Daniel has praise for the staff and management at Countdown Katikati. “They let me in early and were very helpful if I couldn’t find anything.” 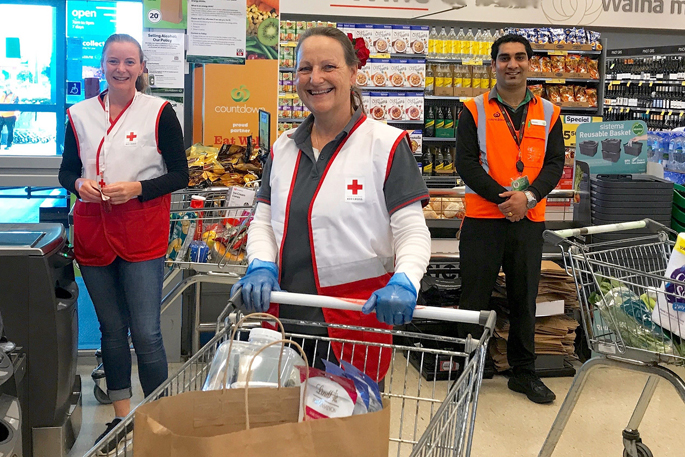 The COVID-19 lock down meant Daniel and Kirstin Wilks had to temporarily close the doors on their Liberty Dance Studio in Katikati. Daniel was also unable to trim the hooves of up to 100 horses which regularly received his barefoot farrier treatments.

With time on his hands, Daniel was happy to be employed by Katikati Taiao, which secured government funding for the shopping service. “I really enjoyed the shopping and although we were quite busy, it was not easy to let people know about the service, partly because the Katikati Advertiser was not being delivered to urban residents. The local paper is an important source of information for many elderly residents,” says Daniel, who handed over the spread sheets and shopping lists to Kirstin on Wednesday April 29 when he was able to return to his farrier work.

For three weeks Daniel had been working with Thor Hawke-Halidone, a Red Cross volunteer, who, using a Red Cross vehicle, waited in the supermarket carpark for Daniel to bring the groceries out. Armed with a list of addresses, Thor set out on his delivery round.

“It was my grandfather Maurice Fletcher, who has been involved with Red Cross for a long time, who asked me to help and as I wasn’t working, I was happy to do so,” says Thor, who returned to work driving earthmoving machinery on Wednesday April 29.

It was Thor who received the enthusiastic thanks and smiles when he made deliveries, but he passed on the appreciation to Daniel and Laura. “It was so rewarding, making the deliveries and spend a few minutes, at a social distance, listening to the stories people told me. There are a lot of lessons to be learned from our older residents and it was also good to know they were receiving the food and groceries they needed.”

Thor had a folding table which he set up to place groceries on, so customers did not have to bend down, and at each stop he cleaned the EFTPOS machine before handing it over for clients to process the payment.

Just how long the service will remain in place has yet to be decided but it has been invaluable in providing food security and vital human contact for people in prolonged lockdown during the Covid-19 response. It also illustrates how quickly and effectively the Katikati community can respond to a need, using technology and people power.