It’s the Holy Grail of kumara 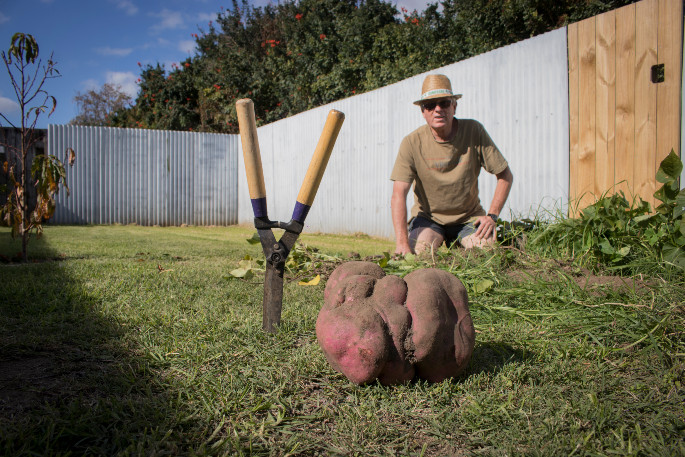 Jeremy Thompson was digging his kumara up last week when he struck the big time.

Amongst his generous crop of kumara was a whopper – a massive 4.6kg specimen.

The Otumoetai man says he’s a keen gardener but “not an expert gardener” by any means.

‘JT’, as he is known to his fishing mates, generally sticks to tomatoes, lettuces, green beans and asparagus but this season he bucked the trend, his son Joel Thompson says.

Jeremy says it is the first time he has grown kumara and even that was quite by chance. They are not a common item at garden stores but he spied some bulbs for sale one day and grabbed them.

“Then I thought: ‘where am I going to plant them?’”

He decided on a small patch of ground behind the shed, planted them and then largely left them to it, albeit with a couple of “swills” of potato fertiliser and some regular watering.

When he dug up the bed last week he was astounded to find some larger than normal kumara, with one massive tuba requiring some additional excavation.

"At first I thought it was just a bunch of closely grown kumara and I was astonished to see it was one massive tuba," Jeremy says.

He is looking forward to chipping his giant kumara and eating it with a side of pan fried snapper with his wife and grandchildren.

But first it needs to be dried out, which could take some time.

“We have been eating the little brothers and they have been beautiful.”

Joel Googled ‘big kumara’ and couldn’t find any mention of a bigger one grown in New Zealand in recent times.

Havelock North man Peter Flanders was featured in his local newspaper back in 2015 with a 3kg kumara and there are reports of a big one in Rotorua this season but no mention of weight.

It’s a wee way off the world record though as the Guinness Book of Records has the heaviest known sweet potato at a massive 37kg.

Nobody really knows why the big ones pop up but there are a few theories. One is that they are actually several kumara that have fused together. The second is that it is a genetic throw-back to a South American variety that used to grow huge.

Either way, Jeremy is pretty keen to continue his beginner’s luck next season. He might even have finished eating the 100 or so generously sized kumara he dug up this year.