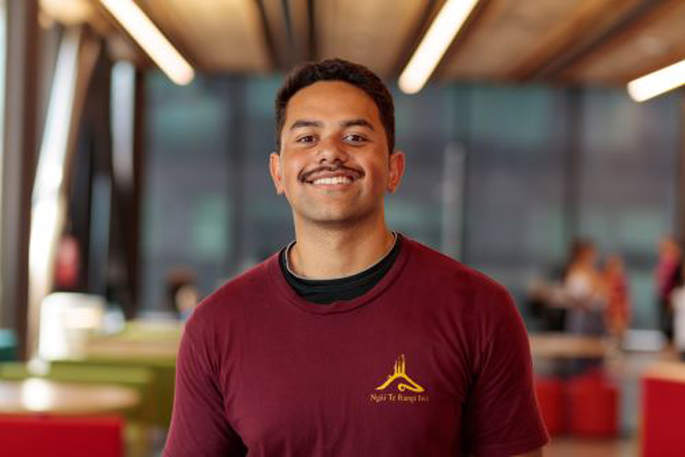 For Anaru Palmer, a year studying te reo Māori through Te Tohu Paetahi at The University of Waikato Tauranga campus was about more than reconnecting with his language – he credits it with changing his life.

The former Tauranga Boys’ College head prefect was drawn to the one-year course after being a student in the bilingual class at high school.

“I wouldn’t say I was able to hold a real conversation before Te Tohu Paetahi, but after the course I’ve realised it’s so much more than just the language.”

Te Tohu Paetahi is a programme that focuses on providing students with a unique Māori language immersion pathway so they can fluently and competently speak in te reo Māori.

He says the course has opened doors for him and it paved the way back to his high school bilingual class, Aronui, where he is now working as a teacher aide.

“From my experience, I can say Te Tohu Paetahi really changed my life. It’s allowed me to be proud and have more appreciation for my identity and culture, and for who I am and where I come from. It’s grounded me.”

Anaru acknowledges Te Tohu Paetahi kaiako (teacher), Ngairo Eruera, for the way he encouraged and extended every student, whatever level of te reo they started with.
“I have nothing but respect for Matua Ngairo. He is my kaiako and mentor but, more than that, he’s a friend.”

Anaru continues with his studies at the university this year, where he’s undertaking a Bachelor of Social Science with a focus on political science and Māori and Indigenous studies.

“It’s amazing to know that with Te Tohu Paetahi I was learning te reo young and I can carry that with me. I think also when you learn another language you are obliged to conserve and protect the language just by speaking it and teaching what you know to others,” says Anaru.

That belief is a big driver for him in his role as a teacher aide in the bilingual unit at Tauranga Boys’ College.

Of Ngāi Te Rangi and Ngāti Ranginui descent, Anaru is the first person in his family to attend university and he says Te Tohu Paetahi helped to strengthen his mindset and allow him to become better at self-management and learn resilience.

“The course was challenging and difficult at times, but I enjoyed it and it was great to know what we were all working towards.”

He says his time in Te Tohu Paetahi also opened doors to working with local iwi, Ngāi Te Rangi, as part of a youth forum.

He says he was also grateful he could complete his studies close to home in Tauranga.

“The Tauranga campus is amazing. It provides a space for Māori students to feel a sense of belonging, and that’s prevalent in the carvings throughout the campus, and the significance that they all represent,” says Anaru.

“We managed to do our learning within that space which gave us the chance to embrace the wairua of the place.”

For Anaru, a highlight Te Tohu Paetahi was the noho stay with two nights spent on his tūrangawaewae, Matakana Island.

“Some of the class lived a fair distance away but they made the effort to come. That represented our Te Tohu Paetahi journey - no matter how far we are, the passion for te reo brings us together. I felt blessed to be with the class outside of uni and develop that whakawhanaungatanga connection. To be able to do that at Opureora Marae is something I’ll saviour for the rest of my life.”

Anaru credits the course with providing him the direction for his future studies, and while he is not sure if he wants to be a politician, he’s had an interest in politics since he took part in the Youth Parliament where he represented MP Tamati Coffey and worked alongside other Government ministers.

“I’m interested in politics, international relations and overseas work with the Government and I see political science as an avenue towards that.”

He encourages anyone thinking of studying at Waikato University to make the most of the opportunity it presents to them.

“The university and the staff are great. I cannot say enough about the experience I have had so far.”