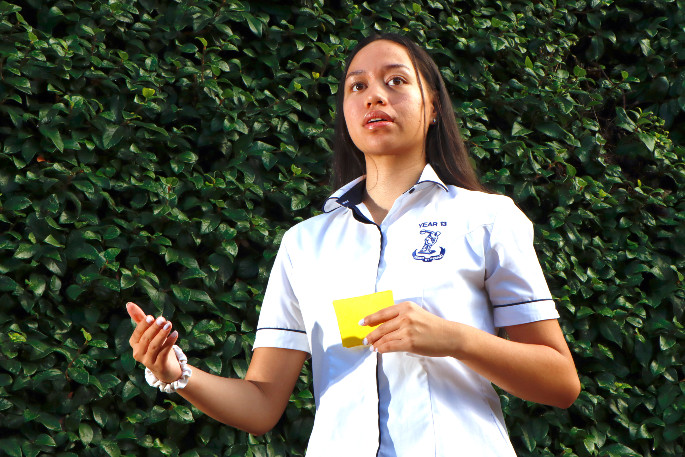 Turning 18 during a national lockdown hasn’t stopped Ngariki Tamainu from taking on other challenges.

On April 17, the Tauranga Girls’ College Year 13 student won a regional speech competition on race relations in New Zealand, earning herself a place in the national semi-finals.

“I couldn’t believe it,” says Ngariki after being told she had won.

“I didn’t think I’d go forward with my speech. I thought I’d write it but not actually present it, but as I started writing I felt I needed to be heard.”

The NZ Race Unity Speech regional competition, with the topic ‘Titiro whakamuri, kia anga whakamua – to face the future, look to the past’ required a novel approach for judging this year. Originally planned to be held at the St George Church in Gate Pa, each participant had to compete in front of a camera as the regional speech competition was held online to comply with COVID-19 restrictions.

“We had been preparing for a while, email-wise,” says Ngariki. “On the night all the judges and speakers were together on Zoom.”

The Race Unity Speech Awards, which have been held annually since 2001, provide opportunity for Year 11, 12 and 13 students to grow an understanding of race relation issues in New Zealand and share their ideas on how to promote unity.

The national semi-finals and finals will also be held online, during Youth Week from May 11-17.

Writing is one talent, public speaking is another, and you have nailed both of these, Ngariki. All the best with the semi-finals and your very bright future.