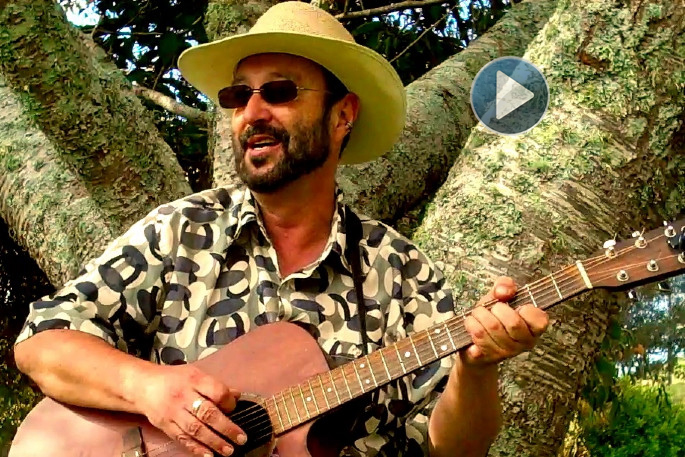 Derek Jacomb wearing one of his many hats and shirts while filming songs during the national lockdown. Supplied image.n

Derek Jacomb, the untroubled troubadour of Te Puna, has filmed a different song every day for 42 days, wearing a new hat and shirt for each video. The result is now viewable on YouTube.

“I had a lot of hats because of performing in the Tauranga Jazz Festivals,” says Derek who is a member of the popular local band Kokomo.

“Once I started, it was hard to stop. I went into lockdown a couple of days early because my son returned from Australia and we isolated together.

“The idea was that while we were in isolation, he would film me singing one song a day, wearing a different hat and shirt each time. About half the songs are originals, a quarter of them are old blues, and a quarter have been requests from people.”

The song-meister’s videos have garnered favourable responses on Facebook.

“People were saying really nice things and I was getting lots of friendly messages, so we kept going. I was going to stop after Level 4, but all the people that were listening were still in lockdown.

“I’m still in lockdown too, so while there’s still a few people out there enjoying it, we’ll keep going.”

Finding more hats and shirts that he hasn’t previously filmed could be a mission as he continues. He also hasn’t shaved during the whole lockdown period.

“I thought it would be interesting to see my beard change over time, although it’s now looking a bit of a mess and getting a bit uncomfortable.”

Derek has found that people from all around the world have got in touch with him.

“There's a woman in Germany who keeps leaving really nice messages. Someone in Singapore, a couple of guys in England who get in touch and a woman in California. It’s been a great way to make contact with people.”

He originally posted the videos just to the Kokomo Facebook page.

“A few people got in touch and said they don’t do Facebook, so I uploaded them to the Kokomo YouTube channel.”

This impressive archive of songs is likely to keep growing as Derek continues taking requests from all over the world.