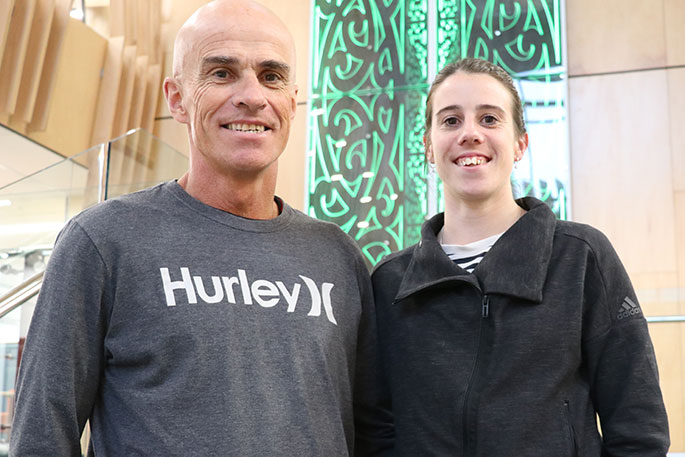 It’s said ‘the family that plays together, stays together’, which is certainly true for the Furmage family.

Dad Terry, mum Sue, and their four daughters Nikki, Kelly, Jodi and Abby, all share a love of sport, hockey and running in particular. But, for Terry and Kelly, it’s also a case of ‘the family who study together, stay together’.

Last year, the pair were studying full-time at The University of Waikato in Tauranga.

Last month, they both graduated - Terry with a Bachelor of Teaching and Kelly with a Graduate Diploma of Teaching (Secondary).

While they are keen to attend a formal graduation at the city campus later in the year, celebrating graduation at home isn’t off the cards either. Right now though, the family are a little preoccupied with another upcoming event.

“Kelly is getting married later this week so that’s been a focus,” says Terry.

“We didn’t celebrate the virtual graduation but we can always do our own and include Kelly’s twin sister Jodi, as her AUT graduation in March got postponed as well.”

Between wedding preparations and work, Kelly’s got her hands full. She started the year as a health and nutrition teacher at her former high school, Bethlehem College, and has adapted to online teaching well.

With his duties as Associate Principal of Gate Pā School also carried out from home, Terry has appreciated having Kelly in the family bubble and has called upon her technology skills more than once.

“She’s helped me to learn, very fast, how to teach remotely and she helps test out what I’m trying to do under these lockdown conditions,” he says.

Terry Furmage had clocked up more than 35 years’ experience as an educator by the time he enrolled at Waikato University.

He’d taught in both mainstream and deaf schools in South Auckland and Te Aroha before moving to Tauranga to take up the Associate Principal role at Gate Pā School (formerly Tauranga South School), 13 years ago.

“I started teaching last century,” Terry laughs. “Back in the days when you didn’t need a degree. When my application for 32 weeks study leave was approved last year, it presented a unique opportunity to get some valuable professional development along with the qualification.”

Terry opted for a mix of online and taught papers so he could connect with other students on campus. His favourite papers were Māori Knowledge and Western Impacts in Education and Implementing Inclusive Practices: Building Community Practices.

“Both papers challenged my thinking and the practices used in education,” says Terry. “My job involves a lot of pastoral care and I’m the Special Needs Coordinator for the school. I want to take what I’ve learnt from my studies and make some changes to how I do things in my role. It’s made me more open to looking at alternatives as ‘one size fits all’ doesn’t fit all our students.”

Looking back on the year, Terry says there were many highlights and believes his year at university gave him more than ‘just’ the piece of paper. He made some great connections and enjoyed many laughs with his third-year primary teaching cohort, some of whom went to college with his daughters and were surprised to find themselves at uni with their friends’ dad.

“Having that contact with students, learning from them, and gaining new perspectives has helped reinvigorate my passion for teaching after 35 years,” he says.

When Kelly Furmage finished high school, she headed to Auckland to gain a degree in human nutrition and sports exercise with the goal to work as a coach or nutritionist. However, after she graduated Kelly struggled to get a job.

“It was the usual story that you needed experience and, as my degree was more theoretical, we didn’t do work placements or internships,” says Kelly.

She returned home to Tauranga before embarking on her OE, eventually making the decision to follow in her dad’s footsteps into teaching. Since she already had a degree, Kelly enrolled in the one year Graduate Diploma of Teaching at Waikato.

Just as Terry enjoyed the mix of younger students in his classes, Kelly enjoyed the banter with the more mature students in hers. “Studying alongside a range of student teachers, who were open to sharing their teaching strategies, was great. I learnt so many things that I can implement in my classroom,” says Kelly.

Kelly chose to include physical education as an option to tie in what she’d learnt from her first degree. With the PE classes held at the Hamilton campus, she became a regular passenger on the Kaimai Shuttle that travels daily between both campuses. She admits her dad came in handy when she needed a textbook, and she borrowed more from his personal collection than the library’s.

Thrilled to secure a position with Bethlehem College that utilises both her teaching and nutrition degrees, Kelly’s next goal is to complete her first two years so she can become registered.

“I just want to be the best teacher I can be and also enjoy this special time and adapt to my new lifestyle as a newlywed,” she says.

For now, the study journey may be over for this dad and daughter duo but, with Kelly’s local gym currently closed, she’s joined Terry on his daily runs.

“Her running has improved since the lockdown and she keeps me honest over my 16kms,” says Terry.