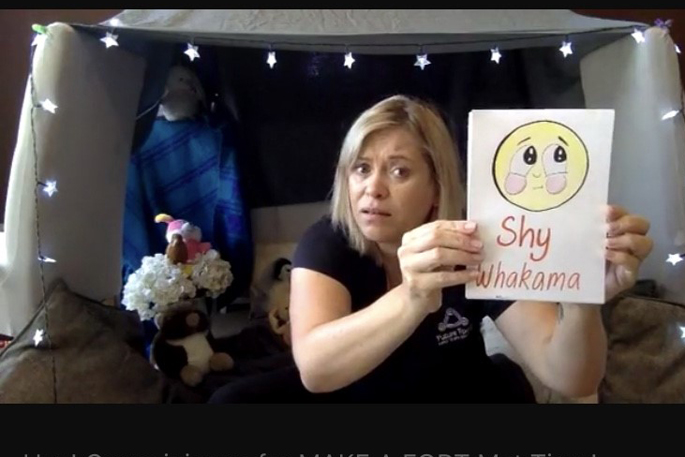 Future Focus preschool teacher Kelly Delamare has been livestreaming mat times for children throughout lockdown, and will continue to do so for kids stuck at home during level 3.

A Papamoa early childhood teacher is live streaming daily mat time sessions in an effort to connect with children stuck at home under level 3 restrictions.

Future Focus preschool teacher Kelly Delamare has made it her mission to continue the feeling of whanaunatanga for students during such a “scary and stressful” time.

Throughout the level 4 lockdown, she was live streaming mat time sessions each day from the Future Focus Facebook page.

Initially, the videos were just for the centre’s students, but after demand from parents from around the country, they were made public.

“We got all these messages from parents asking us to make the videos public,” says Kelly.

The live streams proved popular with parents across New Zealand trying to keep kids entertained at home, some getting more than 1000 views on Facebook.

“Parents would send in videos and photos of their kids singing along with me. The children just loved it.”

Kelly returned to work on Wednesday, but says the majority of the centre’s children remain at home.

Less ten students have shown up to daycare so far, she says.

“Live streaming the mat time will include our children that are not returning in level 3. As an early childhood teacher maintaining that connection and level of care is vital,” she says.

Mat time sessions so far have included a teddy bear picnic and a hut-making tutorial, she says.

Other teachers have also published cooking videos and story time sessions on the Facebook page.

Kelly says this initiative helps maintain a sense of normalcy and routine for children during very strange times, and takes the pressure off parents working from home.

“We just wanted to be able to support those mums and dads whose kids aren’t able to come into the centre.”

Your selflessness is inspiring, thank you for thinking of the kids in these crazy times.