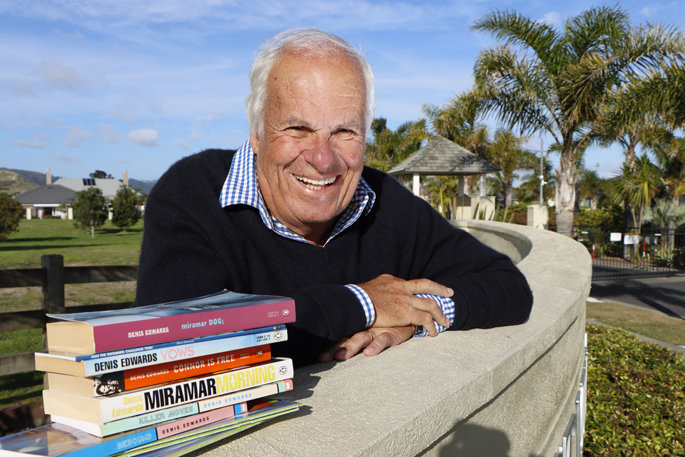 Writing about trouble in a retirement village has got Papamoa’s Denis Edwards into the national spotlight during a national emergency.

But why stop there? Denis doubled down and launched himself further into an epic boredom busting battle.

The effort paid off, as not only has one of his short stories reached the top ten of a nationwide lockdown competition, but another story has taken out the ultimate top prize.

Does writing a short story make a long time pass quickly? Maybe. Retired literary giants and writing enthusiasts from 80 retirement villages all over New Zealand came out in force during the Alert Level 4 lockdown, with a mammoth 172 entries from behind locked fences and gates.

“I figured I had retired, when Susan, my wife, saw the Retirement Village Association short story competition,” says Denis.

Prizes up for grabs in the Generus Living-sponsored competition were bottles of Central Otago vineyard Nevis Bluff Pinor Noir and Pinot Gris. And to give the competition another level of prestige, the judge was Joan McKenzie, well-known in the book world for her work at Whitcoulls and as the person who makes the ‘Joan’s Picks’ among the books in the stores.

Denis has a solid career of writing behind him, having written ten published books and six produced plays, won two playwriting awards, had another six plays on major shortlists in New Zealand, and one script published in the United States. In between there have been appearances on major shortlists for feature and short film scriptwriting, with a short stint writing in the early years of ‘Shortland Street’.

It was an easy decision to pull out the trusty ‘typewriter’, with three broad topics to choose from – ‘All’s well that ends well’, ‘An Unexpected Turn’ and ‘Trouble in the Village’.

“I thought I would see if I had any rubber left on the writing tyres, so I did two stories,” says Denis.

His entry ‘Bowling towards All’s Well that might end Well’ won the top prize, and his ‘Booking a spot of trouble in the village’ won a spot in the top ten.

Born in Wellington, Denis has travelled extensively, lived in Auckland for forty years and in the Mount and Papamoa for the past six years. He and Susan now live at the upmarket Pacific Coast Village in Papamoa Beach.

His first job out of school was with New Zealand Police, as a cadet and a constable in Wellington, including being on duty the night the Interisland ferry, the ‘Wahine’ sank in Wellington harbour. That got him a night helping sort property and time in a packed mortuary.

After returning from overseas, he worked for nine and a half years in the Auckland ambulance service, most of it in South Auckland. During that period, he taught himself journalism.

“I figured journalists didn’t have to go out at three in the morning, in the rain, and get injured people out of upside-down cars,” says Denis.

Fifteen years as one of Auckland’s busiest freelance journalists and writing for almost every magazine and newspaper in the country resulted in winning awards at the then-Qantas Press Awards, for both columns and feature writing. He went on assignment to the United States, Malaysia and Australia.

The journalism took Denis into writing books. He has had ten of them published, four from Penguin, five books for children, one of which ‘Killer Moves’, from Scholastic, was recognized at the NZ Post Children’s Book Awards. One privately commissioned book looked at the life and times of the suburb of Mount Eden – where he lived for twenty years.

Despite the impressive resume and awards, he was still surprised to learn he had taken out the retirement village competition.

“It was a delightful shock when I was told one of them had won and the other was on the ten-story shortlist. It’s been a huge buzz.”

“We are delighted with the fantastic response to the competition,” says a Retirement Village Association spokesperson. “We thought we might have got 40 or so stories, but instead received 172 entries from 80 villages and Judge Joan said it was very hard to choose even the top ten.”

Now that Denis has stretched his writing wings, perhaps he’ll come further out of retirement and knock out some more literary tales, screenplays, books and plays. There’s still some more writing rubber on those tyres for sure.