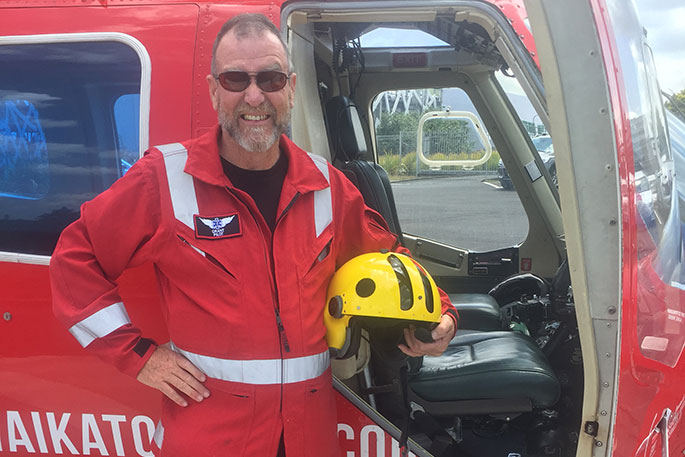 Grant Bremner has been flying the Waikato Westpac Rescue Helicopter since its inception. Supplied image.

A lot can happen in just one day for rescue helicopter crew, so after 35 years on the job, Waikato Westpac Rescue Helicopter’s Chief Pilot Grant Bremner really knows what it’s like to work under pressure to make an impact for the community.

A foundation team member for Philips Search and Rescue Trust, Grant is beyond committed and passionate about the job he does day in, day out, thanks to the massive challenges and greater rewards flying a rescue helicopter brings.

A pipe dream for most, when Grant was a young boy there was no doubt he’d be a pilot one day.

Grant’s love of flying is in his DNA, with his father a recreational pilot and his uncle a WW2 fighter pilot in RNZAF’s renown 486 squadron.

The ambition to fly aircraft and enthusiasm to make a difference in the community just came naturally.

Grant has been flying the Waikato Westpac Rescue Helicopter since its inception. Before this time, he worked as a pilot across the world, from Papua New Guinea to South Africa to back home in New Zealand.

At the time Grant was working in Taupo flying for Helicopter Services Ltd, owner John Funnell and Philips owner John Cooper joined forces to establish the charitable trust following a fatal air accident two years earlier in Turangi, which claimed the lives of two Philips executives and their pilot.

Without an air rescue service in 1985 when the light plane went missing, John Cooper arranged and funded a private search and rescue mission to retrieve his team.

John believes if a rescue service did exist back then, the lives of his colleagues could have been saved.

Grant joined PSRT at a unique time, there were no other local charity-based rescue helicopter services, and certainly none funded by the community.

Grant was charged with setting up a base in Hamilton, today known as Waikato Westpac Rescue Helicopter. Back then the Trust had one Squirrel helicopter, two pilots and one administrator. 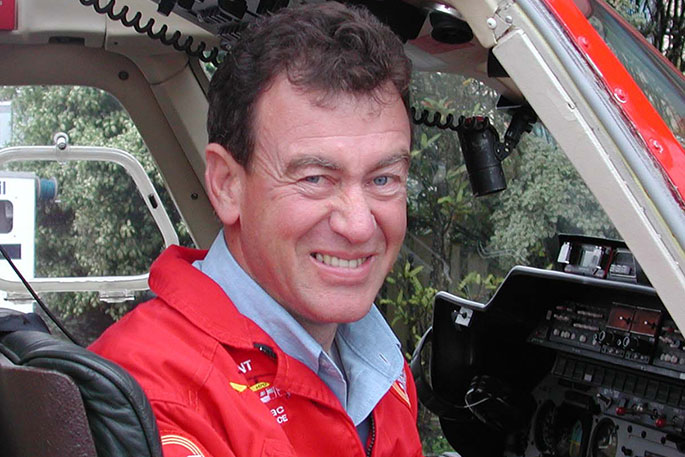 Staff volunteered their time and when not in the air, operated out of a van donated by Terry Booth Toyota. Missions typically included hospital transfers to ICU, farm or road accidents, collection from remote locations and marine and surf rescues. Flight crew consisted of a pilot, and depending the nature of the mission, either a paramedic or medical staff from the relevant hospital.

The service relied predominantly on sponsorship and community support to fund the operations. At the time, Waikato Hospital didn’t have a helipad, so the rescue helicopter would land on the local nursing home’s tennis court greeted by Waikato Hospital’s medical crew. Grant was involved in campaigning to raise funds to build Waikato Westpac Rescue Helicopter’s hangar and helipad.

Grant says although it was, at times, tough to raise the level of funding required to sustain and establish a maiden rescue helicopter operation, support from the community was abundant.

“Association with the region’s first and only rescue helicopter service appealed to most businesses, it was a highly visible community cause to support. Trustbank, who later became Westpac, came on board as foundation sponsor, and continues as principal sponsor today as Waikato Westpac Rescue Helicopter.”

The challenges faced in the early days of PSRT set a solid foundation that saw the Trust create a loyal following of supporters and advocates for the cause.

After nearly four decades on the job, Grant reflects on one of his personal highlights in the Trust’s history, the introduction of the Bell 222 helicopter.

“The Bell 222 and its IFR capability transformed the rescue helicopter service. The Squirrel relied on visual flight rules only, which meant we could only fly in daylight and clear weather conditions. The Bell 222’s IFR allows the pilot to navigate under instrument guidance, enabling us to fly at night and in conditions with limited visibility, it was revolutionary.”

Over his time on the job, Grant says his greatest challenge was establishing a rescue helicopter service.

“Everything was completely new and foreign, we started from scratch on a blank canvas”

Outside his long serving role with Waikato Westpac Rescue Helicopter, Grant is now grandfather to two and usually enjoys spending time in Whangamata. When Grant is not in lockdown, as we all are right now, he loves getting outdoors.

Like many of the patients he has helped rescue over the years while enjoying their own recreational time; you would typically find Grant mountain biking, snow skiing and boarding, or on the water hunting for his next big catch.

and sincerest congratulations on 30yrs Grunter.