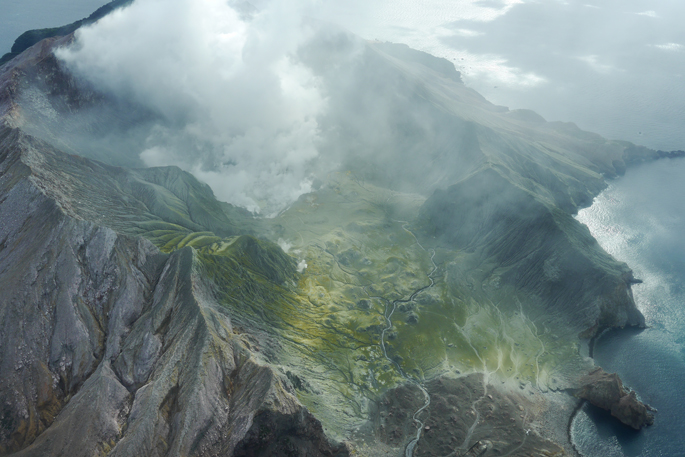 An aerial photo of Whakaari soon after the 2016 eruption shows the characteristic yellow colour of the eruption ash and ballistics covering the crater floor. Image: Karen Britten/GNS.

Cracked rocks on Whakaari/ White Island act like valves allowing gas to escape and releasing the build- up of pressure that triggers volcanic eruptions, new University of Canterbury research has found.

The finding could allow more accurate monitoring and forecasting of future eruptions.

It is based on a study of rocks ejected from the Bay of Plenty island volcano during an eruption in April 2016, well before the volcanic explosion on December 9 last year which led to the deaths of 21 people.

A team of University of Canterbury scientists and Frontiers Abroad students from United States colleges, together with GNS Science and international researchers, collected the rocks from the island in 2016 and studied them.

The studies including testing to see how easily the rocks crack and how gas travels through them.

The team discovered that cracked rocks can act like valves – opening and closing – to allow gas escape.

Lead researcher Dr Ben Kennedy says the findings are “remarkable” and will help scientists better understand the behaviour of the volcano and interpret its sounds and tremors.

“We hope our research will ultimately lead to more accurate volcanic monitoring and forecasting of future eruptions.

“We discovered that the rocks from Whakaari behaved in a unique way. Cracks formed easily, allowing gas to escape, but because the minerals were smushy the cracks sealed again when pressed together by the weight of the volcano, forming a valve.” 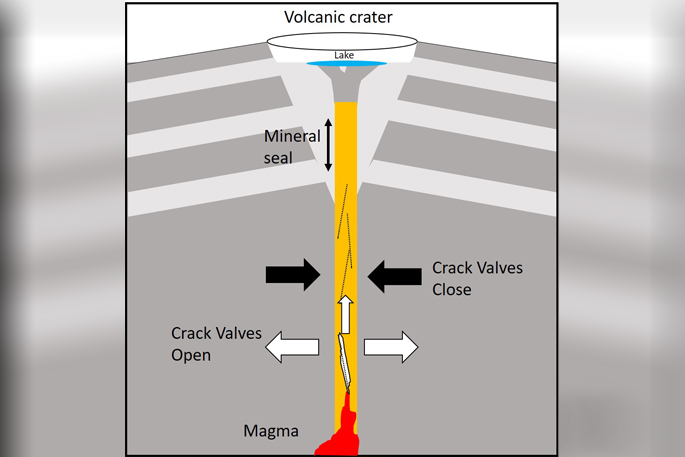 A schematic illustrating the crack valves inside the volcano. Supplied image.

The research, published in the journal Geosciences this month, allows scientists to link certain earthquakes to the movement of fluid through valves within the volcano. This could allow them to track and monitor a build-up of activity that signals gas is moving through the volcano.

Ben says when the rocks were examined under a microscope the composition of very small minerals encrusted in and around the cracks could be seen.

“Beneath the crater lake of Whakaari, pressure pulses inside open these crack valves and let gas escape, and in some areas minerals clog the valves and block the gas from escaping. The research team can put these cracked rocks back together like a puzzle to recreate a pipe that connects the magma at depth to the lake on the crater floor.”

“The pipe has crack valves along its length, some of which are open and some of which are closed by the weight of the volcano or blocked by minerals. The conditions and processes under which these blockages form and lead to eruptions is the subject of ongoing research using numerical modelling of the physics and chemistry of these environments.”