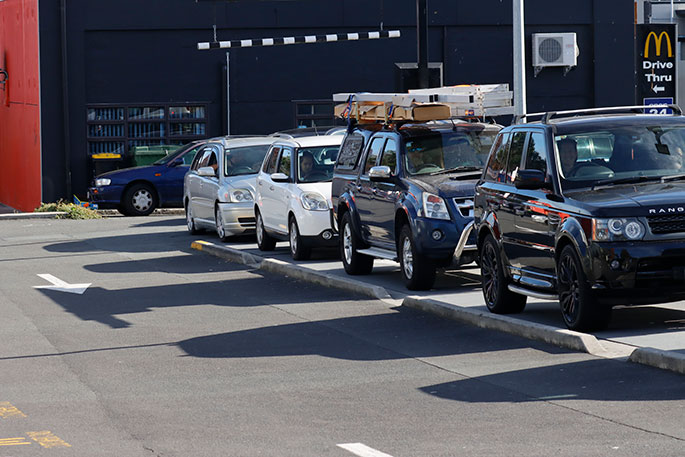 People lining up at MacDonalds in Tauranga on Tuesday. Photo: Daniel Hines/SunLive.

The increase of New Zealanders congregating at level 3 appears to be at expected levels, not worrying levels, Director-General of Health Dr Ashley Bloomfield says.

The World Health Organisation has labelled New Zealand's response to the Covid-19 coronavirus pandemic as world-leading, but also warned against complacency.

The move to alert level 3 meant another 400,000 people returned to work yesterday, with long queues for takeaways and much more traffic on the roads.

The demand for takeaway food has been unusually strong, and one of the country's biggest pizza chains, Hell Pizza, said it triggered one of their busiest days ever.

He suspects people are using level 3 as an excuse to get out when they should not.

"Just those using their cars because it's level 3 and I'm like 'level 3 is still very similar to level 4 guys'. I mean, come on, we've done well and even I've got cabin fever, you know, but we've got to stick with it."

Ashley told RNZ's Morning Report he thinks the increase in people out and about is in line with expectations.

"There were definitely more people out yesterday and in fact I noticed more traffic this morning so things are gearing up a bit. Maybe that was a few of the kids heading off to school ... although perhaps a bit early for that.

"I don't think at worrying levels, I would have thought they were at expected levels.

"One of the things yesterday was a much lower number of complaints to police ... about people who were out and about.

"I've been really impressed by what I've seen, I was certainly pretty early putting my order in for a coffee at Mojo.

"Tempting to have a chat to people. Please do, but keep that physical distance."

Ashley has also elaborated on his statement that New Zealand is "well on our way" to having the contact tracing capability indicated by Dr Ayesha Verrall's audit as "critical" to the Covid-19 response.

"We're there with the key ones, and the key ones are turnaround time for laboratory testing ... and contacting 80 percent of close contacts within three days."

He says New Zealand is now achieving the testing time requirement, and data had showed the one for average contact tracing speed was already being outperformed, with 80 percent of close contacts reached within just two days.

"The other things we will start to monitor as the system builds ... some of them weren't the mission critical ones."

He says he's consulted with others on the recommendations of the audit, and had invited Dr Verrall to meet with his team this week and discuss variations to some of them - and there were some things New Zealanders could do to help.

Ashley says one of the main ways of reaching people is through the National Health Index.

"One of the key things Kiwis can do is make sure their contact details [with public health authorities] are up to date."

"We also have access to a sort of finding service through police and customs."