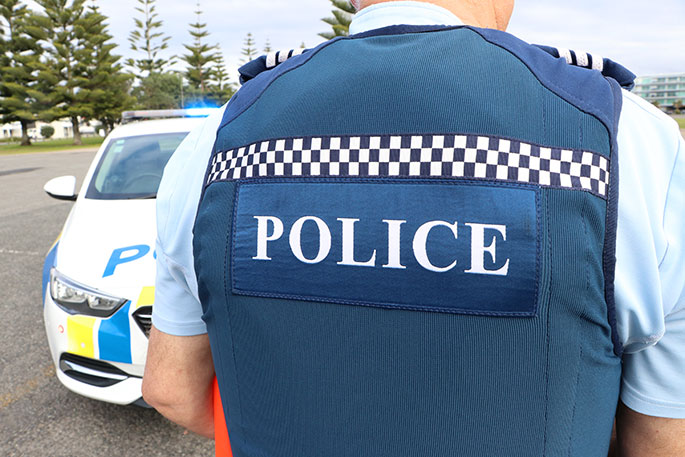 The IPCA have released their report into the 2018 incident. File photo/SunLive.

The Independent Police Conduct Authority has found that an officer's use of force was unjustified and unreasonable when he kicked a man and aimed a pistol at his head following a pursuit in April 2018.

At 8am on Sunday, April 29, three men robbed a supermarket in Taupo with crowbars. Police pursued their car, successfully spiking the tyres.

Officers attempted to keep the car in its lane as the driver lost control. They then tried to force the car off the road in order to protect other road users, which the Authority found to be justified.

When the car came to a stop, the first officer to arrive on the scene presented his firearm at the driver and pulled him from the car, while two other officers arrived and dealt with the passengers.

A witness alleged that the first officer lunged at the driver, as if to punch him, while he was handcuffed.

The Authority found this most likely happened, on the balance of probabilities, and that there was no justifiable reason for doing this.

Witnesses also alleged that the officer kicked one of the passengers and held a pistol to his head as he lay face-down and handcuffed on the ground.

The officer denied kicking the passenger, however, the Authority is satisfied this did happen, and finds it to be unjustified and unreasonable.

The officer said he initially thought the man was secured but had not confirmed this himself. When the man swore at him and rolled over slightly, he thought he posed a threat, so dived on top of him with his pistol still in his hand.

His pistol was pointing towards the man's head and may have accidentally touched it. However, witnesses gave different accounts of the incident.

"The passenger was not in a position to effectively resist or escape Police custody, and did not show any intention to, based on what others observed," says Authority Chair Judge Colin Doherty.

"Although the officer has argued that he believed the passenger did pose a threat of resistance and escape, the Authority does not accept he actually believed this. Furthermore, even if that belief was genuine, it was not reasonable."

Police subsequently charged the officer with common assault and assault with a weapon.

The officer was acquitted of both charges following a jury trial in February 2020.

Police acknowledges the findings of an IPCA report released today that found an officer had used excessive force during an arrest that followed a fleeing driver incident.

The report found that the officer, referred to as Officer B, lunged at an alleged offender, and unjustifiably assaulted and pointed a pistol at a second alleged offender.

A colleague, Officer A, raised a complaint about Officer B’s actions, alongside a number of other witnesses.

Police advised the IPCA and stood Officer B down from duty.

Officer B was charged with assault and assault with a weapon and was acquitted at trial.

“Police hold our staff to very high standards and this arrest did not live up to them," says Acting Assistant Commissioner: Districts, Bruce Bird.

"The IPCA’s findings indicate this officer did not uphold our values.

“I want to commend the officer who spoke up against behaviour he believed was inappropriate.

“I also want to reassure the public that any allegations involving inappropriate conduct of a Police officer will be thoroughly investigated and appropriately dealt with.”

An employment process in relation to this incident is ongoing and the officer remains stood down from duties.

In the heat of a moment things can happen that might have had tragic results. The officer behaved badly and was made to account for it. The jury recognised that policing is not an easy job, and gave him the benefit of the doubt. There is no doubt that we have very high standards of policing in our country and that is the only way that the rest of us can be confident about our police.

Did any of the criminals suffer long-lasting injuries? I imagine the traumatised supermarket staff suffered mental trauma for much longer than it took the criminals who did the crime to recover from some rough handling. I expect Officer A may not be someone you wanted covering your back in future encounters with armed and dangerous offenders. The police have a dangerous job dealing with hardened criminals who do not respect the rules of society until they find themselves being the victim.

Hot pursuit of the alleged robbers has at least identified the perpetrators who now have a permanent record of their antisocial behavior. Had they not been stopped, they and their friends would have been emboldened to carry out further criminal adventures with likely worse outcomes.

do it once on the spot

its the only way to protect himself and the public.its got to be quick and secured.