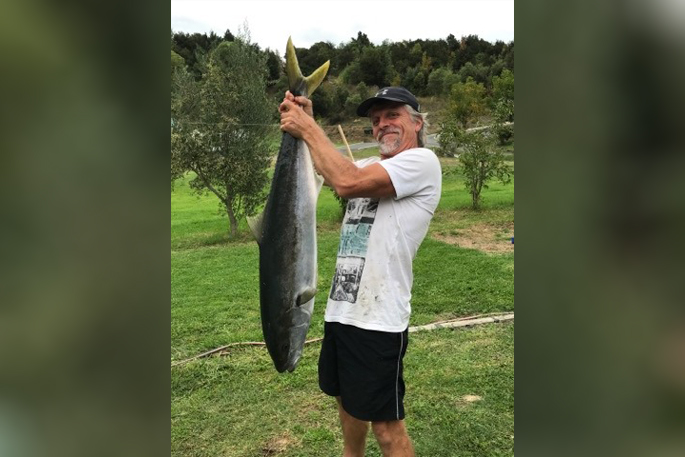 Logan Reid caught a one metre long, 20kg kingfish with his hands when walking his dog down Wairoa river yesterday. He describes the experience was a “miraculous provision.”

A Tauranga man’s afternoon walk along Wairoa River took an unexpected turn after he caught a 20kg kingfish with his hands.

Logan Reid was walking his dog Bonny at Miles Lane Reserve along the river's edge when all of a sudden he spotted a “huge white fish” moving gently in the shallows on Tuesday.

“Of course I didn’t have my fishing gear with me - but I couldn’t quite believe it when I realised it was a kingfish.

“As I approached, it saw me and swam out into the river further - so I thought that was the end of that.”

But only minutes later, the fish swam up to Logan once again. “The fish was floating on its side in about a metre of water. I took off my shoes and waded towards it.”

In the spur of the moment, he made the call to spear the fish with a “long, sturdy” stick. Logan then grabbed a hold of it, carrying it to dry land.

“It was all a bit overwhelming. I had nothing to end its life with, so I rustled around in the surrounding bush and found a brick.”

Fishing is banned under alert level 4 restrictions. When New Zealand moves to alert level 3 at 11.59pm on Monday, April 27 fishing is allowed from the shore. 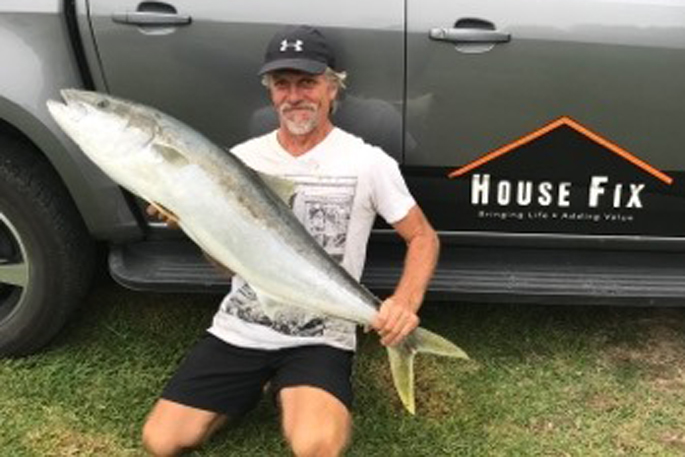 Logan describes the experience as a “miraculous provision”, saying when he left the house yesterday he had no intention of catching a fish.

“When I was walking back with it, I had to drag it across the grass because it was much too heavy to carry. My wife just couldn’t believe it when I bought home.”

“The harbours and lower parts of the rivers are a rich environment food-wise for them.”

Tauranga Sport Fishing Club manager Roly Bagshaw echoes this sentiment, but says it is unusual to find a kingfish as far up as Miles Lane Reserve.

“Finding a kingfish up that far the Wairoa River is quite unusual – but it is amazing where they do turn up. It’s not the sort of place you would naturally go to catch a Kingfish.”

Logan, who is a seasoned fisherman, says normally lingfish are very good fighters. But this one was clearly struggling.

“If you caught one on a rod on the boat you could battle with it for more than half an hour but this fish wasn’t acting normally -  it was  tired.”

He spent the evening gutting the fish, cutting it up and handing it out to neighbours. “Over the fence and from a safe distance of course,” he adds.

Logan reckons he’ll get about 12-15 meals out of the kingfish.

“This is absolutely the biggest fish I have ever caught.”

You make a really good point. Hadn’t thought of that.

be careful a kingi is a fighting fish had many an hour with them, if it was that docile i would not be eating it i would have let it go, it had possibly got poisoned, or a parasite, remember seeing a photo of a school of dead fish, with a warning form the fisheries saying that they had parasite that was in there food chain and should not be consumed has the same effect as shell fish

So did he go fishing or hunting or get takeaways - LOL. WELL DONE. CONGRATULATIONS.