Calls for clarity on checkpoint legality 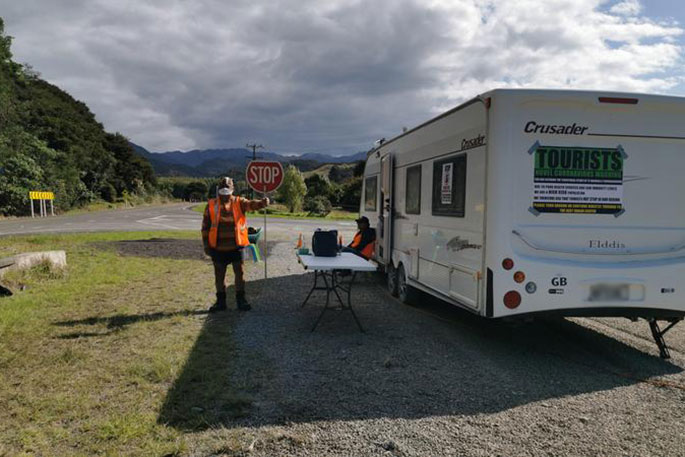 One of several checkpoints along the East Coast's State Highway 35 to stop people travelling during the covid-19 outbreak Photo: supplied/ RNZ

National is calling for clarity on the legality of community checkpoints despite them being credited as key in keeping COVID-19 out of isolated communities.

Iwi and hapū in regions such as Te Tai Tokerau and Te Tai Rāwhiti have been running checkpoints to restrict access to their rohe - and keep COVID-19 out of vulnerable communities. Police have been working alongside them

But National Party's police spokesperson Brett Hudson says the government must clarify the lawfulness of checkpoints.

"The challenge we really have is in two areas: first if the government wishes to condone these sorts of community checkpoints then really they need to set out for the public how they are lawful, and to publish guidelines so that communities across New Zealand that may be wishing to protect their vulnerable, to protect their communities, can know if, when and how they can operate such things.

"Certainly it is not clear under legislation such as the Land Transport Act, that community groups have the lawful authority to do these things."

Brett says there have been complaints about intimidation at these checkpoints.

"There was a report yesterday of a gentleman in his 70s going out to get a bottle of milk who was stopped by a gang member and forced to turn around."

There is confusion in the community about the lawfulness of checkpoints, he says.

"It is not at all clear, particularly under the Land Transport Act, that even with police condoning it, that it's actually lawful for general members of the public to detain people, to stop vehicles, to direct them, or indeed to even request their personal details which we know has been happening."

Tina Ngata, who has been leading the charge of checkpoints on State Highway 35 in her rohe on the East Coast told Morning Report, that there is a precedent for such activities.

"Sensible community traffic management is not a new thing, and if you are looking for some lawful or legislative background I would direct them to the Māori Community Development Act 1962."

This act covers the way in which Māori wardens engage in traffic management, she says.

"I think it's really interesting that some people, particularly in a crisis of life and death, are looking to hold these kinds of political discussions, when this sort of activity has been happening for a long time."

There has been generally positive feedback from the public, Tina says.

"And the proof of the pudding, at a time like this, is not really about the political points people are trying to score it's about the lives that you're trying to save, and the lives that have been saved through the efficacy of this kind of work is innumerable - we've had over 12,000 interactions with vehicles just within Ngāti Porou in the last two weeks."

She has also been calling for more support from the defence force and the police with the checkpoints.

Meanwhile in Te Tai Tokerau in the north, Hone Harawira, assures the checkpoints will stay in place as long as the communities want them.

He says the role of them is to protect all people in the north.

"If what we are hearing from the checkpoints is anything to go by, it might be a while before we can say our people are truly safe.

"The checkpoints engage with the public right across the north and they are talking to hundreds of people every day, getting feedback on how COVID-19 impacts their lives. And the word they are getting from whānau is almost universal - thank you for keeping our communities protected, and for keeping our kaumātua and kuia safe. Can you please keep the checkpoints going until it's all over?"

Earlier this week Te Tai Tokerau Iwi Chairs forum, Te Kahu o Taonui spokesperson Harry Burkhardt said the local response is firm - they believe it is critical to stay where they are now, in level 4, as they do not believe they are safe yet.

Seems to be two different laws going around. Extra subsidy’s going in certain directions too!!! Really struggling to understand this place seems like labour is driving a wedge between groups

I have heard several different opinions from various spokespeople for the various illegal road blocks that are currently in operation around mainly the upper North Island. I still haven’t worked out why the law have not removed these people and publicly acknowledged this illegal activity. The thought and indication by one writer that there is an approved ’STMS traffic management plan’ is just laughable if it wasn’t so crazy, does the sign on the rear of the caravan in the article suggest this is a ’road management’ thing?..of course not....so...is this the time to decide (again?) if we live under one law?...or do we move further towards separatism....

Well said. And to read that they’ve even been detaining people . . . Under what authority? Kidnapping I think would be a better word.

just because they might have stms on site does not make them legal. were the blocks publically notified 42 days in advance. dont think so. as someone else has stated no way would i stop for a gang member

Of course they are legal

If you are worried just stop and check with the STMS on site who will show you the approved traffic management plan then you can check that the signage and spacing meets the approved plan.

These road blocks (yes that’s what they are), are wrong in so many ways. And if anyone, other than duly appointed authorities (police and military) try to stop me they better be prepared to be run over. I will not stop for some gang member wearing his patches, not ever.

the only people that can legally block a public road is nz defence force police or civil defence or someone acting under their direct orders. all others have to go through legal channels. such as schools public events etc. refer.to nz transport act/blocking of public roads.govt.nz. if i was there and they tried to, stop me or hinder my lawful travel. i would immediately call the police and have them removed

Just like the ’travellers’ they are trying to stop being out there illegally they are also breaking the law with their illegal checkpoints. I understand what they are trying to achieve with this but they cannot take the law into their own hands. What happens under Work Safe NZ if they get injured by a vehicle due to their untrained actions? Who are they to start demanding and collecting people’s details?

Would love to hear the response

to the allegations of intimating a 70 year old going to get milk?