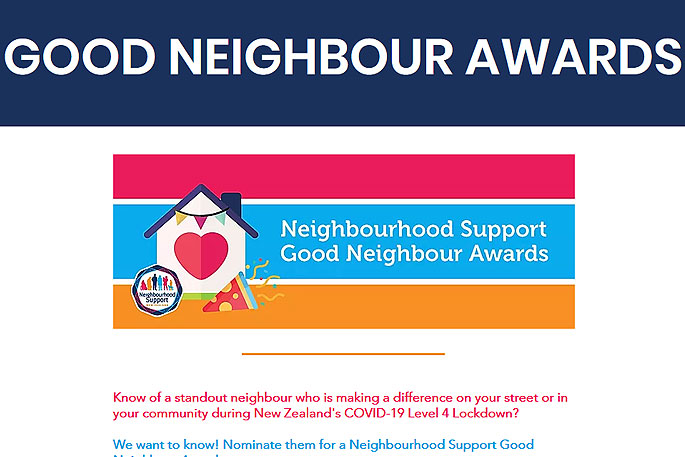 Neighbourhood Support New Zealand is launching the Good Neighbour Awards, recognising those who are helping others while staying safe.

The weekly Good Neighbour Award is about celebrating Kiwis supporting each other, by helping those who live nearby.

Chief Executive Tess Casey says keeping to our own bubble and maintaining a two metre distance doesn’t mean neighbours can’t still be there for each other.

“We’re really keen to hear how New Zealanders are utilising Kiwi ingenuity to creatively solve problems and support each other, while still keeping themselves and their neighbours’ bubbles intact.”

New Zealanders have shown a strong sense of community spirit since the lockdown began on March 25 and the Good Neighbour Awards are about applauding and encouraging more of the same behaviour, she says.

“By sharing stories of neighbours helping each other out, we’re also creating a resource for others to tap into. We know that number eight wire Kiwi mindset is alive and well around the country and we want to hear about it.”

Neighbourhood Support has created a nomination page on its website and will close off each week’s competition on Sunday evenings. The winner will be announced on Tuesdays.

“The nomination page is open for entries now, so we’re encouraging people to spread the word and get those nominations rolling in. There’s lots of good neighbours out there, people who are making a difference for those living next door.”

Tess says each week’s winner will exemplify what a good neighbour is all about – “be kind, be safe, make a difference by supporting and caring for those around you.”