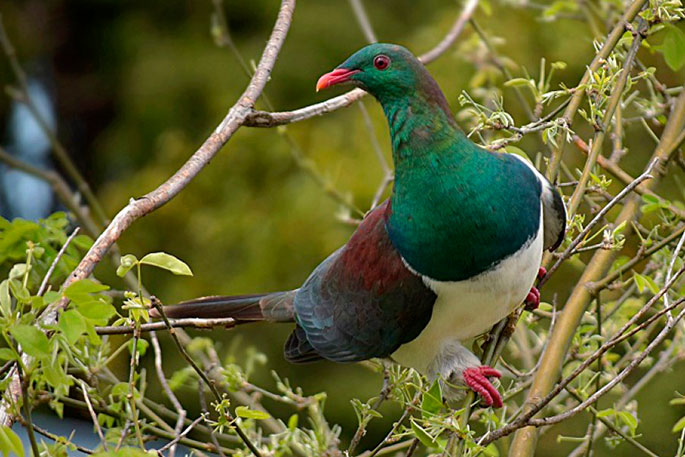 New Zealand birds are loving this lockdown, no longer having to compete with cars, buses, trains, planes or people.

Kererū have been landing on back fences, pīwakawaka have been seen playing on Lambton Quay, and tūī have definitely been singing loudly at the crack of dawn.

"One of the main things that people are noticing at the moment is just how vocal the birds are," Zealandia centre director Danielle Shanahan says.

"They're not having to compete with the constant traffic noise and as a result we're hearing them much more."

Danielle says some of the birds living at Zealandia had also become far more adventurous since the lockdown began.

She says staff tasked with looking after Zealandia noticed that younger birds in particular were far more curious, and were following rangers around on their daily walks.

Ecologist Margaret Stanley says the increase in bird numbers may be partly due to drought conditions forcing them to look for food in people's gardens.

She says it could also be that we are just noticing bird life more, now that life had slowed down.

Danielle says the birds would be enjoying the decrease in noise, light and air pollution - along with slightly messier public parks, where maintenance had been stopped.

The real test would be to see if it lasted once the lockdown lifted, she says.

"Will we go back to always driving our cars? Or will people be maybe getting used to working at home, and work at home a few more days a week?"

"Might we be more accepting of less maintenance by council around parks and gardens?"

Forest & Bird spokesperson Megan Hubscher says it was wonderful to hear birdsong in the lockdown and she hoped it would make people appreciate the environment more, but not all birds were better off.

"Seabirds in particular have not fully fledged yet. We've got a lot of seabirds still in their burrows that haven't learnt to fly or leave their nest," she says.

"And those seabirds like penguins, shearwater, around the country are at imminent risk of being predated because trapping isn't occuring."

Forest & Bird along with other conservation groups wanted the governement to priortise the environment in its post-lockdown recovery plan.

Great to hear about the Kereru. I have also heard more morepork around our place and definitely had more Piwakawaka around our place. And Tui are just going crazy at the moment as well. Plus a few more pesky parrots awkwardly.