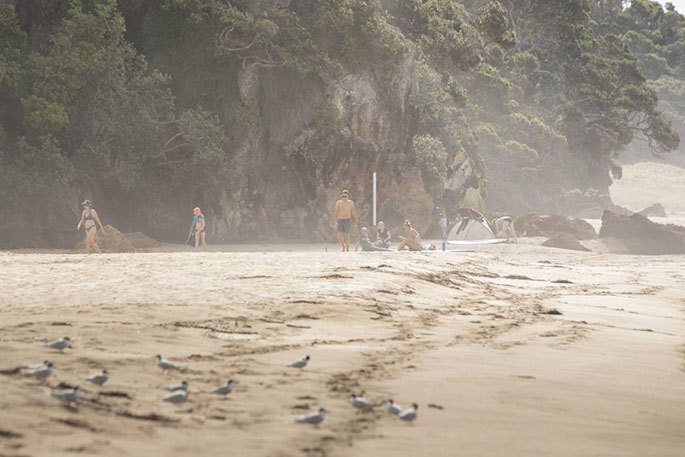 A few tourists seen at Hot Water beach during week 1 of the lockdown. Photo: CHRISTEL YARDLEY/STUFF

A Hot Water Beach resident abused whilst trying to stop lockdown flouting surfers says he won't give-up on his mission to keep the waters clear.

The man, who wanted to remain anonymous so he could remain unrecognisable to the law breaking surfers, says despite his best efforts, the Coromandel surf beach remained a popular spot.

On Saturday, April 4, police released updated guidelines around Alert Level 4 rules and provided clarity around what was acceptable bubble behaviour - that included a ban on swimming or water-based activities such as surfing or boating.

But just days later, the Hot Water Beach local counted around 20 surfers in the ocean. As Easter weekend rolled in, there continued to be a steady stream.

When he confronted them, he was abused.

"Since lockdown​ started I've been trying to educate the people of Hot Water Beach, but I'm not getting very far," he says.

"They're very defiant and have been very smart and abusive and they're making a lot of noise to be noticed."

He says he's well-aware that being a "squeaky wheel" wouldn't do him any favours with the surfing community, but his priority was keeping the community safe.

"Our focus at the moment is trying to fight coronavirus​, and it should be all for one and one for all, but there's a division here.

"I thought the people here would take this international hotspot​ and put it on the map again, and give it kudos in a crisis by being a leader."

The man says he's disappointed in the abuse aimed at him, but wondered why there wasn't a stronger police presence to enforce the latest restrictions.

A police spokesperson told Stuff that while a majority of people are following Level 4 restrictions, they are aware of some instances where people have continued to head to local surf spots, including Hot Water Beach, and officers have attended as a result, they say.

At checkpoints over the Easter Weekend, officers stopped people who had planned to go on day walks in the bush and a search was almost sparked for a man who told a family member he was going fishing.

"Our preference has been to talk to the public about the restrictions in place; however, if people continue to breach the rules, our officers have the discretion to take enforcement action.

"The message to people is clear - if you're planning on going surfing – don't.

"While you can leave your home to exercise, you need to keep it local. We are continuing to ask people not to go swimming or surfing or to do things that may require help if they end up getting into trouble, because that places others at risk and puts pressure on our emergency services."

The spokesperson says that if people had concerns for their safety or the safety of others, they should call 111 straight away.

For the man, who has called Hot Water Beach his home for more than four decades, his love for the Coromandel town outweighed the risk of abuse.

You CAN go and sit on the beach and get some air if you want to. (Observe separation...) The problem here is that they are SURFING and that is not allowed. (It puts people at risk if they have to be rescued...). It’s tough for all the surfers, but most of them are obeying the rules. I hope you are able to resume coffee with your mates, safely, and before too long...

… the rules and, after 2 weeks into lockdown there is no excuse. People flouting the lockdown now need more than friendly advice; there has to be a deterrent (fines, board confiscation, and for repeat offenders, jail.) These people are simply spitting at the rest of us...

Why can he not mind his own business,they all look like ADULTS there and well apart, this probably the only time to do this before WINTER sets in, GOSH there are to many BUSYBODIES and DOGOODERS out there upsetting people, its only a day out to get some fresh air etc and are now at home, for goodness sake take a break man, life is short, i miss going with me old mates 5 days a week for coffee to catch up with things, i hope they make it through ok,i try to keep in touch,anyway SUNLIVE which is THE BEST FOR NEWS,This is my thoughts only on this, it upsets me to see this happening here about this, i would like to go and sit on the beach too and have a break and get fresh air,anyway Thankyou,10-4 out. phew.

Hot water beach was always going to be a favourite spot,they are not likely to be locals.the police should be doing regular patrol there,With the nations lockdown hundreds were given warnings and only a handfull got prosecuted.this give those hundreds another chance to spread the virus.Its a lock down ,everyone knows the rules,there should be no warnings.Like the man in CHC given bail for spitting at people ,he broke bail the next day.

I fully understand where this guy is coming from but these idiots refuse to listen to the Government so why did he expect them to listen to him and to not give him abuse. So long as we continue with our wet blanket education and encouraging approach you can expect people to do their own thing. A little handful of prosecutions that’ll get a tut-tut and that’s it. Come on!