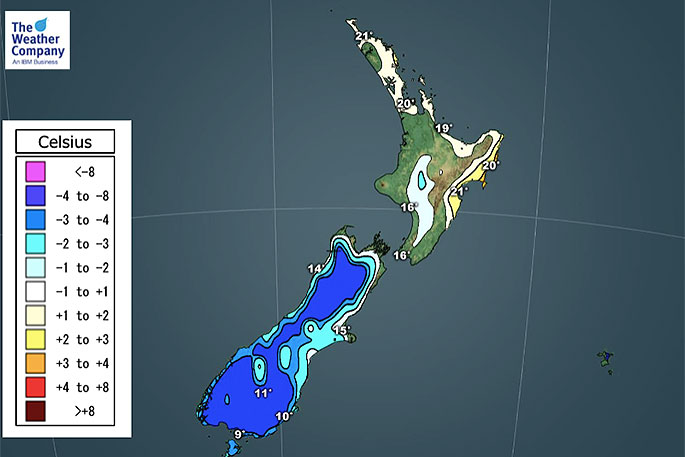 Temperatures are expected to drop in the next couple of days. Images: WeatherWatch.co.nz

Low pressure is today rapidly deepening south of NZ and will push gale force winds into some areas, especially the Southern Alps and various coastal parts of both islands.

Severe gales are possible in some areas too.

"Total winds don’t look as intense as they did even a few days ago with placement of the centre of the low further south – in fact a lot further south compared to some models in the past week," says WeatherWatch.co.nz

Monday and Tuesday will be windiest nationally.

Colder air surges north today and regions south of Auckland will be colder than normal by several degrees in many cases.

"Tuesday will be colder than normal for even more places.

"Heavy snow is back in the forecast for the first time in 2020 with WeatherWatch.co.nz forecasting 25 to 50cms of snow in the Southern Alps." 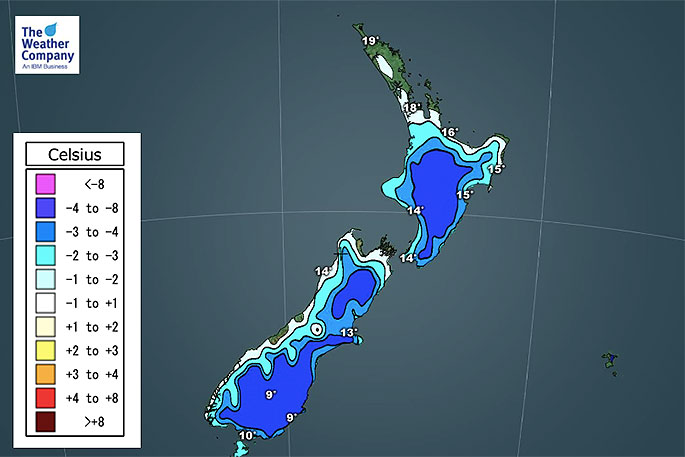 By Wednesday, the low will be drifting northwards to the east of NZ, keeping windy weather and colder weather continuing on for some – and late week another surge of colder air.

"The warmer than average run of weather we had over Easter Weekend is now over for much of NZ, but some parts of Northland and Auckland along with the eastern coastal fringe of the North Island down to Hawke’s Bay will be mild for Monday.

"It will be mainly dry in these warmer places too, thanks to the sheltering effect of NZ’s mountains and ranges.

"NZ beaches will be more dangerous earlier this week with larger waves coming further up the beach thanks to both lower air pressure and gales at sea.

"Seas will be highly dangerous in some locations for any Essential Services."