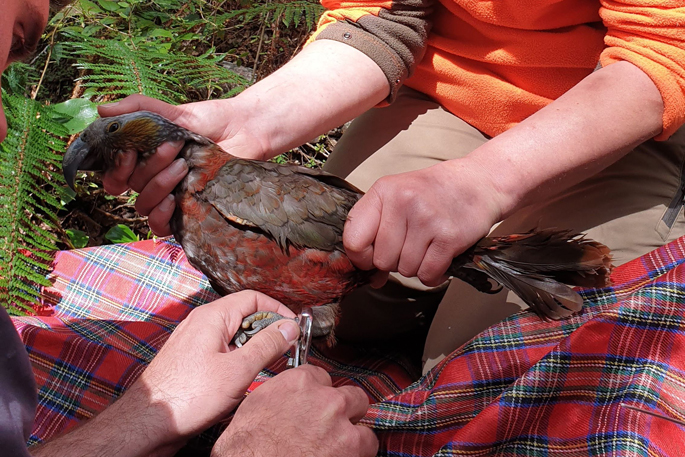 Kaka are thriving due to Tiakina Nga Manu – the largest ever predator control programme in the Department of Conservation’s  history, the Minister of Conservation Eugenie Sage says.

“We have a biodiversity crisis around the world and in New Zealand, which is why in 2018 the Government delivered the biggest boost to Department of Conservation funding in decades,” Eugenie says.

“This has enabled DOC to undertake its biggest ever predator control programme ‘Tiakina Ngā Manu’ over more than 848,635 hectares of conservation land to ensure our unique native forests and wildlife can thrive.

The work was largely completed before the COVID-19 Alert Level 4 lockdown started.

“Large flocks of South Island kaka with more than 30 juveniles in Fiordland’s Eglinton valley, for example, show kaka are thriving and their population is rebounding as a result of ongoing predator control.

Monitoring has shown an effective decline in the number of rats at more than three quarters of the sites monitored, she says.

“The ratio of one female kaka for every 1.4 males in the Eglinton Valley is also a sign of a healthy population.

Without predator control, many female kaka are killed in their nest holes causing a male-skewed population, Eugenie says.

“Ratios as low as one female for every 5.7 males have been recorded in areas without predator control.

“Last year’s mega mast saw a big increase in trees dropping their fruits and seeds to the forest floor, providing spikes in predator populations who thrive on these until they run out – then they turn on native species. The mega mast made this predator control work even more important.”

COVID-19 alert level 4 means DOC has paused its predator control field work to support the COVID-19 response and ensure staff and contractors can stay at home.