Police highly visible on the roads this Easter 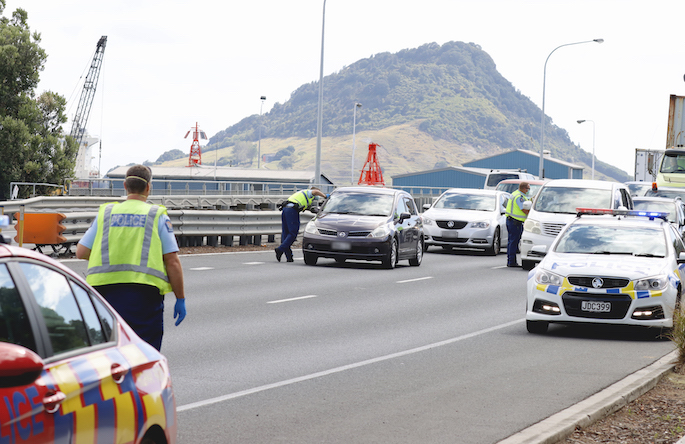 A police checkpoint on SH2 not long after lockdown began. Image: Daniel Hines/SunLive.

Police are continuing to enforce lockdown restrictions on the roads this Easter weekend.

Police conducted 190 checkpoints across the country on Thursday, and continue to remain out on the roads today, to ensure people are complying with Alert Level 4 restrictions to help stop the spread of Covid-19.

The majority of people stopped by police have been complying with Alert Level 4 restrictions, which is pleasing to see, a police spokesperson says.

“However, we are still seeing examples of people who are not complying.”

At a checkpoint northbound on SH1 at Fisherman’s Table, Paekakariki on Friday, approximately 40 vehicles were stopped in an hour, and four vehicles were turned around.

“In one car, a man had driven from Porirua with his dogs and was heading to Waikanae to walk them as “that’s where he always goes”.

Four flatmates from Mt Cook in another car told police they were heading to Otaki for a day tramp in the bush.

“And a couple from Pukerua Bay were heading to Paekakariki to walk the Escarpment track back to Pukerua Bay — this was deemed unsafe.

“Last night, a man in the Wairarapa told a family member he was going fishing on the coast.

“He did not return and was not in communication with his family.

“This meant local police staff were tasked with responding, including planning for a potential Search and Rescue operation if needed.

“The “missing” Wairarapa man was found, and appeared to have decided to stay out on the coast overnight in his car.

“This is a prime example of someone putting themselves, and emergency responders, at risk and taking Police resource away from where it should be.”

Checkpoint data is not yet available for every district, however, early reporting in some areas found:

In Rotorua, 600 vehicles were stopped with three turned back for non-essential travel.

Almost 400 vehicles were stopped in Southern District, with five warnings given for minor breaches.

Across Central District, 2123 vehicles were stopped, and 57 warnings were given out. Of those given warnings, 26 vehicles were turned around.

Up until 4pm yesterday, more than 2000 vehicles went through checkpoints across Auckland, with 46 drivers issued warnings.

“Police continue to urge the public to stay safe this Easter by staying home.

“Officers will continue to be highly visible on our roads throughout the long weekend, ensuring those who are travelling are doing so for an essential reasons.”

Police have recorded a total of 583 breaches, with 74 prosecutions and 495 warnings issued since Alert Level 4 restrictions came into force.

Why are we still issuing warnings. Quite obviously this PC softly, softly approach is too wet blanket. Aussie is now issuing drivers AND passengers $1300 fines each. It’s time to hang that wet blanket out to dry. Enough is enough.

Fairly constant traffic on Pyes Pa road. Walk everyday and count cars. Most times since the lockdown in a half hour walk an average of ninety cars not at commute times for essential workers nor do most look like essential workers ?. Good Friday with no shops etc open slightly less at 70 cars. A few times the road is quiet but not often