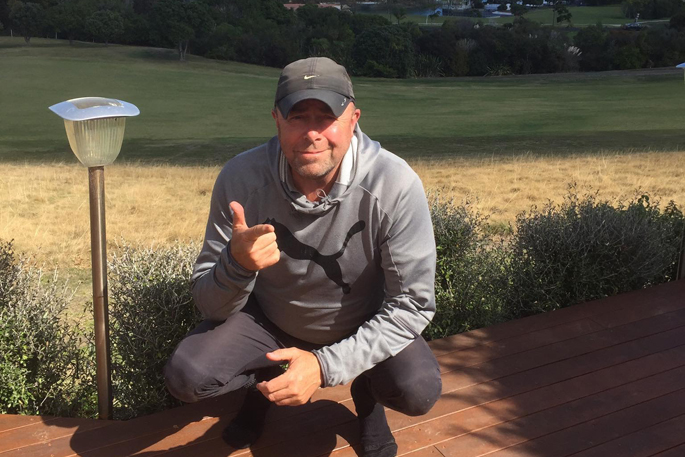 Greg Taylor rewrote the lyrics for ‘Hotel California’ by the Eagles and turned it into ‘The Isolation Song’, garnering a positive reaction from the Papamoa community on social media.

An isolation-themed Hotel California cover is bringing laughter to the people of Papamoa amid the COVID-19 lockdown.

‘The Isolation Song’ is a result of collaborative efforts between two friends Greg Taylor and Ben Sharplin killing time at home.

Greg, who rewrote the lyrics to the Eagles song, posted the video to a Papamoa community Facebook page this week.

Singer Ben Sharplin passionately performs the song from home, belting out the chorus “welcome to home now in isolation – such a lonely space, such an empty space.”

Greg says the idea came about after having one too many drinks on a Friday evening in lockdown.

“After a few wines at about 10pm on Friday, I messaged Ben to see if he wanted to do a collaboration of some sort. I had no idea what song I wanted to do – but he chose Hotel California which I was happy with,” says Greg.

“I tried to make it a bit humorous - the lyrics of the actual song don’t make much sense, so I thought I would make some sense out of them.”

Rewriting the lyrics only took Greg about 90 minutes. “I was a little disappointed - I thought it would kill a whole day.”

The Auckland man is currently not working as he runs a sushi-catering business alongside his wife. “It was just something to do – I could probably cover a new song for everyday left of lockdown.”

“People have loved it – it’s funny and is even better combined with Bens singing.”

“I'm really enjoying the different kind of connection with people while being shut in. Make sure you take the time to keep connecting,” he wrote.

Greg says it’s a tough time out there for many Kiwis, and he hopes to produce more content over the next few weeks to inject some humour into people’s lives.

He’s also keen to work with any eager Tauranga musicians.

“I don’t want to burden Ben, so if there are any local artists down there wanting to collaborate, they can message me on Facebook.”

Loving all the talented people out there

Awesome, thank god for all the talented people out there making a difference for the rest of us struggling through this really hard time. One of the positive things about having social media in these times. It would certainly be a different story today all over the world with these lock downs if we didn’t have it and this is coming from someone that is not on any social media sites.

That best sums up my reaction to Ben Sharplin & Greg Taylor’s witty re-working of Eagles classic “Hotel California.” At a time like this we need to laugh, and this catchy number is just the ticket. It’s relevant, easy to sing along to and I’ve posted in to my Facebook page as an Easter prezzy for family and friend - one that’ll keep giving. So pat yourselves on the back guys, I’m sure if they could hear it the Eagles themselves would be impressed.