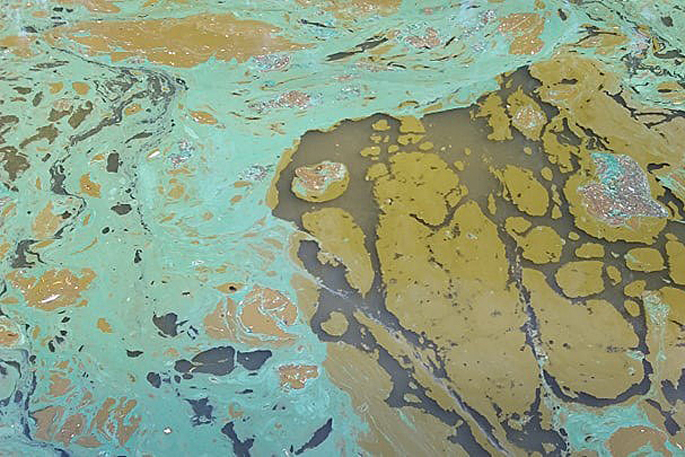 Although artistic the cyanobacteria is potentially toxic. Images: Christie Cramer

A potentially toxic algal bloom in the Papamoa stormwater canals is causing concern for residents.

Jacqueline Edwards says the first thing she noticed is the stench when she was out walking with her two children along the walkway near Evans Road.

“It was a very unpleasant smell, it smelt like mould and fowl droppings.

“I was worried about breathing the smell in while I pushed my daughter in her stroller past.”

It was their first outing in over two weeks and Jacqueline was annoyed and concerned by the look of the water.

Her eight-year-old son told her it stinks and that it looks like a turquoise painting they have at home.

While this had Jacqueline in fits of laughter she says it still wasn’t a good feeling having to walk past it.

She had concerns for a dog that was drinking the water as well. 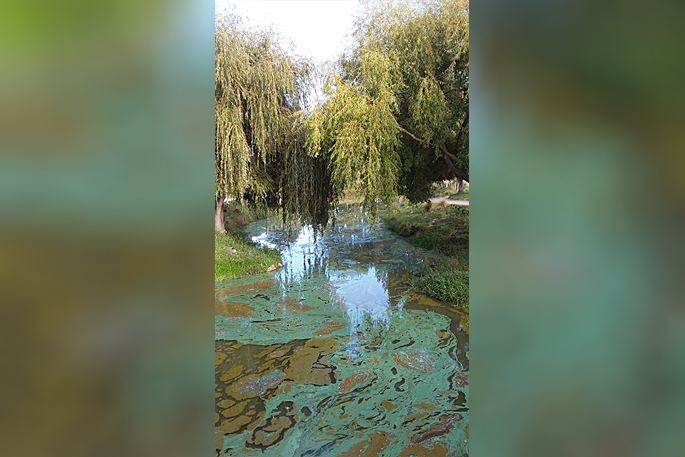 The Tauranga City Council is testing the water to confirm the presence of potentially toxic cyanobacteria, which is the blue-green algae residents have seen.

Water in the Wairakei waterway in Papamoa and in the pond at Double Bay Road, The Lakes is being tested.

“It is advised that humans and dogs keep out of water contaminated by potentially toxic algae, and avoid drinking or touching it,” a council spokesperson says.

The areas of concern in the Wairakei stormwater reserve, are from Maldives Way to Gravatt Road and from Palm Springs to Emerald Shores.

“Warning signs have been installed in some areas and more signs will be going up shortly.

“Toxic varieties can be especially harmful to dogs so avoid contact with the water and do not let dogs drink the water, eat the algae on the banks or swim in these waterways. Ideally, keep dogs on a lead.

“Algal blooms are a natural occurrence, influenced by a sustained period of lack of rain - low flows, and favourable weather conditions, calm weather and high temperatures.

“Cyanobacteria can cause the water in ponds to become murky or cloudy with blooms giving it a ‘pea soup’ appearance. They can also cause a film or layer of scum on top of water or at the water’s edge, and can give off a musty smell. Algae disperse naturally with natural flow once sufficient rain falls. 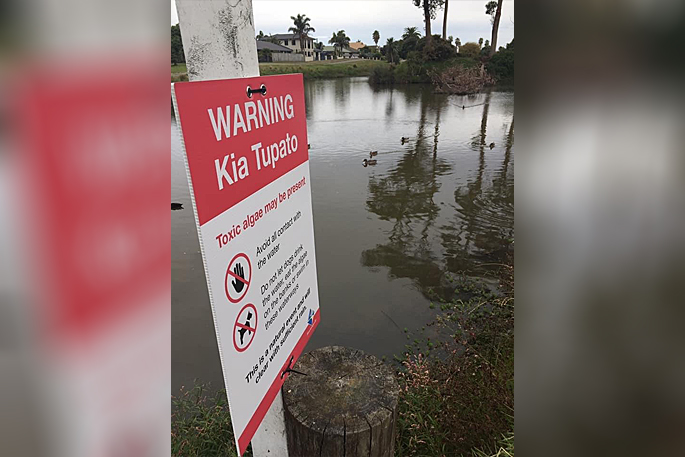 “As a general rule of thumb, if the water looks green or has a layer of algal scum, stay clear of it.”

If people see green algae in waterways and there are no signs up nearby to warn of dangers, please report it to council by calling 07 577 7000.

More information on cyanobacteria can be found here.