COVID-19: The key developments from April 8 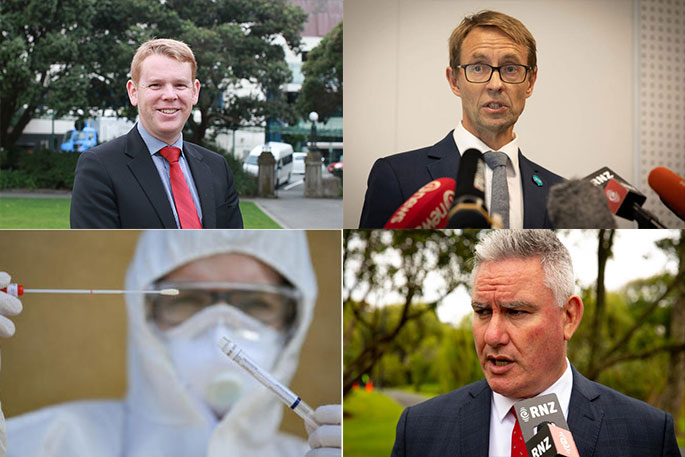 In today's COVID-19 updates, the daily increase of cases in New Zealand is slowly dwindling, a home learning support package has been revealed, a review of the tourism sector is on the horizon, and police are still clamping down on rule breakers ahead of Easter.

The slow fall of daily cases

It's a drop from Tuesday when 54 new cases were reported, which was also down from the 67 cases reported on Monday.

Another 41 people recovered overnight, bringing the total number of recovered cases to 282.

The country's three biggest clusters of the coronavirus are still at Marist College, a Bluff wedding, and a St Patrick's Day party, and there's been no addition to the list of discovered clusters so far.

In his media update this afternoon, Director-General of Health Ashley Bloomfield said he had asked health officials to use testing to ringfence all 12 clusters.

He says that may include testing close contacts who have had no symptoms to see if they were pre-symptomatic.

Six of the workers have recovered.

Ashley they were still investigating the number of health care workers who were infected in the workplace or outside of it, although more than a quarter had been overseas recently.

There were 4098 tests processed yesterday, the biggest number of daily tests carried out so far.

Prime Minister Jacinda Ardern says she's cautiously optimistic about the progress being made in the lockdown, "but now is the time to stay the course".

She can't confirm whether the lockdown will be extended at this stage.

"Ultimately what we want is control of the virus."

Jacinda urges people to get tested if they symptoms, adding that there should be no shame or stigma about experiencing symptoms or needing to be tested.

Forty-nine people have so far registered for the charter flight to get New Zealanders stranded in Peru home.

Jacinda says details on when the flight will depart Lima are still being finalised, but officials are working as quickly as possible.

The Ministry of Foreign Affairs (MFAT) says the flight will only be able to make one stop, in the Chilean capital, Santiago.

It says people who are in other parts of South America who could get to either Lima or Santiago could be able to join the flight.

The government is also working to get New Zealanders home from other parts of South America on charter flights being arranged by other governments.

MFAT says it's also in touch with 58 New Zealanders stuck on cruise ships around the world.

That figure is a significant drop from two weeks ago, when there were 372 New Zealanders on board 30 cruise ships.

The ministry says all 15 New Zealanders on the MS Zaandam and MS Rotterdam cruise ships had arrived home safely.

While those stuck on the Greg Mortimer cruise ship in Uruguay look set to be evacuated on a medical flight to Australia.

More than half of the 217 passengers and crew on board the ship have tested positive for COVID-19.

In a statement, Uruguay's foreign ministry has confirmed it has authorised the landing and departure of a flight charted by the cruise company, Aurora Expeditions, for both Australians and New Zealanders.

Authorities in both Uruguay and Australia have been involved in getting the flight off the ground.

Aurora Expeditions said passengers on the flight would be separated into different cabins, depending on whether they had the virus or not.

The flight is expected to depart Uruguay on 9 April (local time) for Melbourne.

Review of tourism and reboot on horizon

The future of tourism and how it is governed will be rebooted in the wake of the global COVID-19 pandemic.

The industry has been one of the hardest hit, haemorrhaging staff and money as visitors dried up and the lockdown started.

On Wednesday morning, Tourism Minister Kelvin Davis announced a project to reimagine the way tourism is governed, marketed and how visitors are managed.

Tourism New Zealand will lead the project, working with the government, industry and businesses.

Its chief executive Stephen England-Hall says it's an opportunity to listen to communities and design the future of tourism in New Zealand.

He says tourism needed to benefit New Zealanders and the country.

The priority was to create something that genuinely gave back more than it took and played a key role in economic success, he says.

However, he says New Zealand needed to be ready for when international visitors were allowed to return.

The International Visitor levy will also be reviewed by Davis and Conservation Minister Eugenie Sage to focus on how it can help rebuild the tourism industry.

The Minister of Education is warning parents not to assume schools and early childhood centres will automatically reopen once New Zealand moves out of Level Four.

In an announcement, Chris Hipkins says a package delivering about 17,000 devices to students, and tens of thousands of hard copy packs to others, will roll out from this week, so that students were ready to learn when term two officially starts on April 15.

He says plans are being made for a range of scenarios - and moving out of alert level four would not be straightforward.

"We're moving so that all families will have at least one education delivery option available to them when term two starts.

"The ministry has surveyed schools and about half say they are well set up currently for distance learning using the internet. But we are taking action to support new connections and resources for students at all schools."

Chris says the government is working to lessen the impact of the school closures on students doing NCEA this year.

He says more than 100,000 children do not have access to a digital learning device, and the ministry was looking at how it could safely gather devices sitting idle at schools to households that needed them.

"We're anticipating a number of short term logistical challenges as you might imagine, with device availability and connectivity, so our plan is a pretty broad one.

"This is a big and complex job being delivered at speed, and there are constraints around the stock of equipment in the country.

"Not everyone who needs them will get internet access, digital devices and hard packs at the same time.

"Where we are unable to immediately connect a household with the internet or get a device to a student, we will be working with schools and kura to provide hard-copy learning materials direct to homes."

The package will target four areas:

Police have issued a warning ahead of Easter, as the number of people breaching lockdown rules continues to rise.

In a media conference on Wednesday afternoon, Police Commissioner Andrew Coster says people should no longer have an excuse to say they were not aware of the lockdown situation or what they could or couldn't do at this stage.

"We have seen, over the first period, a lot of people who genuinely didn't understand, who needed to be guided and educated on the controls in place.

"We're now at a stage where most people do know and are doing the right thing, so the people we come across who aren't, more often are likely to be flouting the rules and therefore warrant some kind of firmer action."

More than 350 people have now been issued warnings (76 of which were in the past 24 hours), and more than 40 people are facing prosecution for breaching the Covid-19 lockdown rules - most of them repeat offenders.

However, Minister of Health David Clark - who admitted twice to breaking the lockdown rules in recreational activities - was not issued with a warning from police.

Andrew says their initial intervention approach, as with anyone, would mean people would be educated and encouraged in the first instances anyway.

"David Clark has very publicly apologised and has had a conversation with the prime minister that I suspect would carry more weight than what police would be able to do at this point.

"We don't believe a further conversation is required with him given the outcomes."

Checkpoints will be in place over the Easter weekend, ensuring people are only travelling for essential purposes.

Meanwhile, eight police officers have been forced to self isolate after being spat at by members of the public.

Andrew condemns the actions, saying the offenders were either thoughtless or malicious.

He warns that people could be charged with infecting with disease - an offence which carries up to 14 years' imprisonment.

He says the offenders will be tested for COVID-19 and the staff too if necessary.

The Police Commissioner also says he's confident officers would soon be visiting every single person who arrived in New Zealand to ensure they were self-isolating, after police last week admitted they had not been able to carry out the checks which had initially been promised.

Police had since ramped up efforts and carried out almost 1200 face-to-face visits since Friday, he said.

There were were now eight initial support agreements with airlines and a ground handling company, totalling 4.7 million, she says.

Much of New Zealand's freight used to be carried on passenger aircraft, she says.

Supported by government money, Air New Zealand has made 17 flights since Monday last week to a range of cities in Australia, Asia and the US, with 18 more flights planned over the next 10 days, taking food and returning with things like Personal Protection Equipment, hand sanitiser, and testing kits.

Meanwhile, flight numbers are beginning to pick up, especially on trans-Tasman routes. But passenger arrival numbers have fallen to their lowest level yet, at 96 people on Tuesday.

Fifteen flights would have left Auckland airport on Wednesday and 11 would arrive.

Apart from services to Shanghai, Los Angeles and Doha, all flights are to and from Australia.

Christchurch and Wellington each have a single flight to Sydney.

Departures have nearly quadrupled in five days to more than 2000 passengers.

The government says it was working with other countries to allow foreign nationals to transit through airports here if they needed to get home.