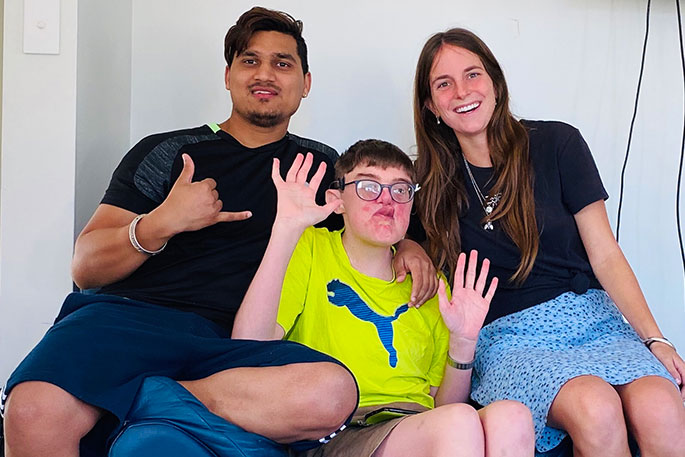 For most of us, leaving school is a time of change and mixed emotions. There’s the excitement of perhaps leaving home, spreading your wings and gaining some independence.

But there’s also the seeming pressure of having to decide what do once school has finished - even though you find out later you’ll probably change your mind about this a few times along the way.

Everyone’s wants, needs and thought processes around these decisions are different. If you have a disability, the considerations are the same – what to do and whether you move out of home. However, finding the level and type of support to live the life you want can also be tricky.

Especially if your disability requires high levels of support and your family have always provided this for you.

Meet Dylan. He finished school last year and, just like many other young men, had always dreamed of moving out of home and into a flat. In late November, 2019, with the support of ConneXu, his dream became reality; he moved into a flat in Tauranga. 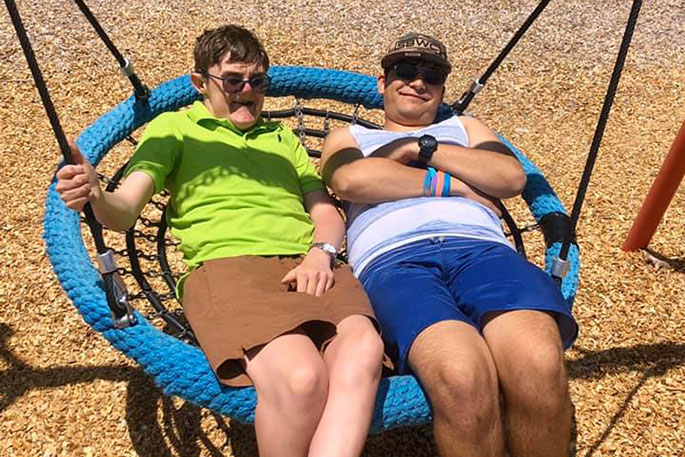 Dylan had a great summer with his flatmate Will (both pictured left; before lockdown) and ConneXu supporters, and has settled into his flat well. There is great morale in the house, and Dylan has given everyone in the flat a nickname.

For example, Tara (his ConneXu Service Manager) is ‘Lion’, because she wears her hair in a topknot, Will is ‘Whale’, because it sounds like his name, and his supporters are: Mike (‘Ostrich’), MacKenzie (‘Owl’) and Sachin (‘Kangaroo’).

Dylan feels at home here and enjoyed helping choose the furnishings, texting pictures of things he would like included in the flat to Tara.

Dylan loves horses, so there is a picture of one in the hallway, and his bedroom has been painted his favourite colour – yellow.

Because Dylan has Coloboma of the eye (a condition where part of the eye structure is missing), he has limited vision and yellow is one of the only colours he can see.

Coloboma of the eye is a common symptom of CHARGE syndrome, a condition Dylan was diagnosed with when he was two months old, which is also characterised by other physical and learning disabilities.

As Dylan and Will each have their own needs, interests and goals they are working towards, their schedules look slightly different.

When not in lockdown, Dylan attends a program run by Geneva three days a week where he is part of a small group of young people that does fun activities like karaoke, baking, drumming, going to a café, or arts and crafts. He is currently making a police car that he’s spent a lot of time on and is very proud of. Will on the other hand is doing a level 2 computer studies course at Toi Ohomai.

However, Will and Dylan also enjoy time together. When there were no Covid-19 restrictions, they go to Dylan’s grandma’s house for a swim, or enjoy a trip to McLaren’s Falls or the Mount to hang out or explore.

The young men’s ConneXu supporters are really aware of the lightest touch approach, which means that the flatmates have responsibility for the day to day running of the flat, but with backup and guidance if they need it.

So just like any flat, it is Dylan and Will’s responsibility to ensure the house is clean and tidy, and the groceries are done. If a plumber has been called, they would greet them at the door, then communicate with them to get the problem fixed. This allows Dylan and Will to grow in independence and confidence, with the safety net of their ConneXu supporters in the house if they need them.

I had the pleasure of speaking with Chris, Dylan’s Mum, to get the family’s perspective on how things are going three months on from Dylan moving into his flat.

“I have always felt that Dylan needed to be living somewhere independent of David and I. Not being morbid – but the reality is that we won’t always be here, and we needed to have another plan in place. Plus, we both work, and that has become an issue with the ongoing and future care for Dylan,” says Chris.

“With ConneXu, we phoned them and they very quickly arranged a meeting. They knew Dylan’s name and everything about him before the meeting. This sounds like a small thing – but we haven’t always had this experience, and it was nice to know they cared.

“He is very happy in his flat– with Dylan we would certainly know if he wasn’t.

“Our supporters are absolutely lovely. They are very much aware of Dylan’s needs and will change the situation if he is getting agitated. They are very intuitive. And they are great at communicating with us.

“Having Dylan in his own flat is fantastic. As he is here in Tauranga, I love that we can pop in if we are passing and catch up. Plus, there is a huge - perhaps not relief – but the sense of ease we feel knowing Dylan is ok is wonderful,” says Chris.

This is where I heard Dylan’s Dad, David, and sister, Holly, call out to me through the phone Chris was holding: “We love it! He is happy and we are happy.”

At this all-important stage in Dylan’s life, what more could a family want? 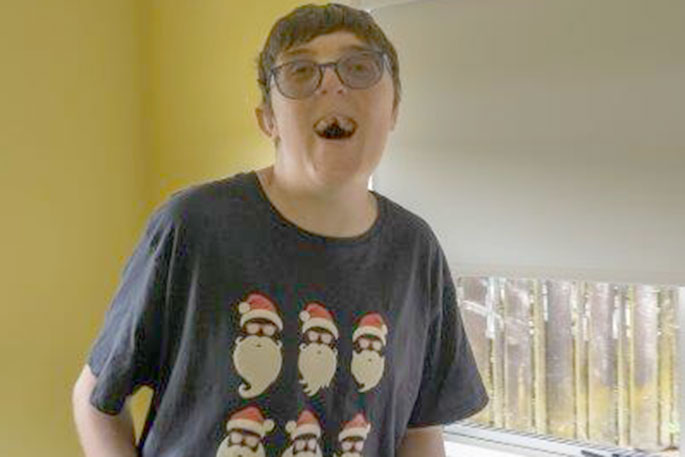 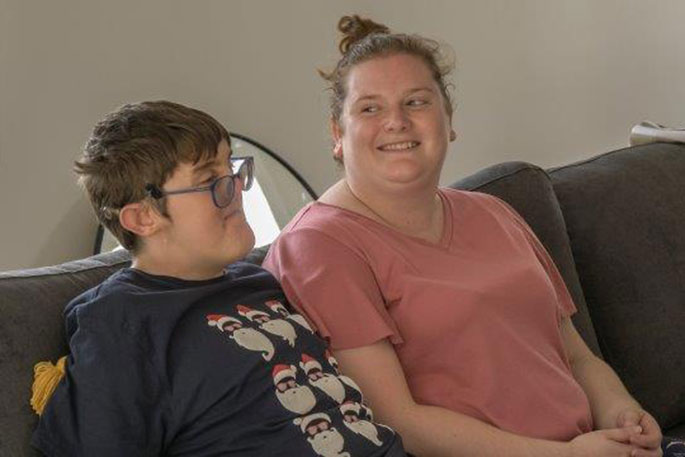 Dylan and his sister Holly have a break on moving day 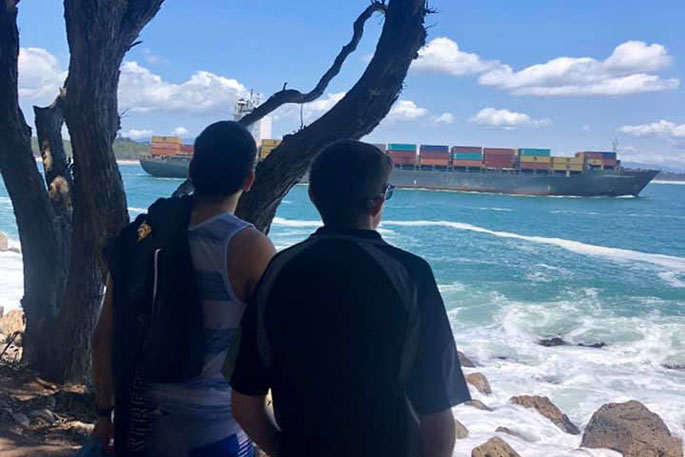 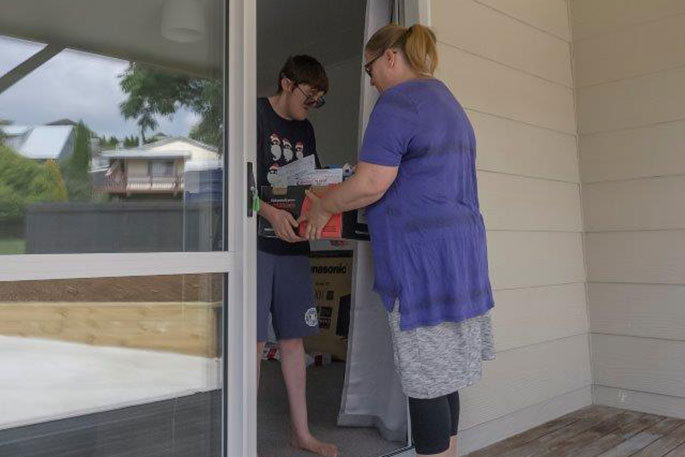 Dylan and his mum Chris on moving day