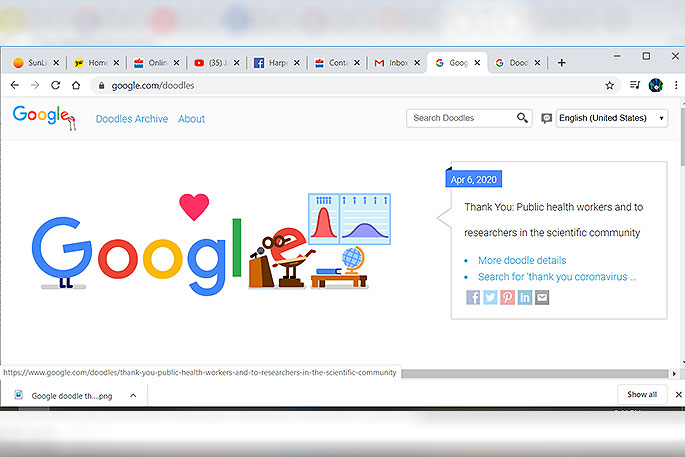 “To all the public health workers and to researchers in the scientific community – thank you.”

That's the message behind today's Google search homepage and it's a timely reminder of the great job being done by New Zealand's health and scientific communities.

Google.com says the doodles are the “fun, surprising, and sometimes spontaneous changes” that are made to the organisation's logo to celebrate, among other things, the lives of famous artists, pioneers, and scientists.

The latter now includes the efforts of those on the frontline of fighting the Covid-19 pandemic.

The first customised Google doodle appeared way back in 1998 but it was  another two years before the novelty really took off.

In 2000, a chief 'doodler' was appointed in the form of then Google webmaster Dennis Hwang, who came to oversee a whole team of doodle illustrators and engineers.

Twenty years on, the team continues to turn out innovative designs and bring smiles to internet users around the world. A gallery of all the Google doodles can be found at www.google.com/doodles

In its efforts to celebrate interesting events and keep things fresh, Google is also open to receiving design ideas from the public.

Submissions can be sent to  doodleproposals@google.com.

A Google.co.nz page, which encourages submissions from schools, has the following suggestions for would-be artists: