The big OE just got smaller 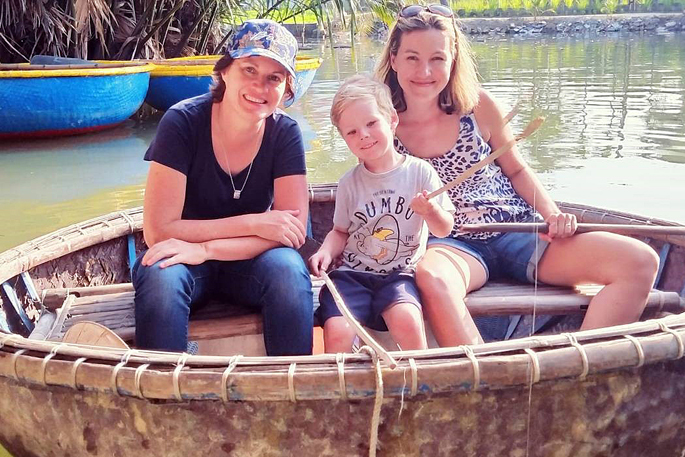 Kelly Rice with her partner Andrea and their son Hugo.

Tauranga woman Kelly Rice provides a perspective on being far from home during an international crisis.

OPINION: We left the mighty shores of New Zealand on December 8th, 2019.

A few short weeks later the virus stories started hitting the media.  Most Westerners in Vietnam, including us, brushed it off.  We were too busy enjoying the food, architecture and roaring around on scooters in Hoi An to worry about a little ole virus.

The months of December and January flew by as we went basket boating, visited galleries, old ruins and made friends with a gorgeous water buffalo close to the markets we visited every day, along with thousands of other people.  It was so much fun, but we soon realised it was time to start making money again.

Employment beckoned in one of the many jewels of Vietnam, Ha Long Bay.  We packed up and arrived in mid-February.

We started to hear more about the virus from every media outlet in the world.  I became concerned and wrote my family back home asking if they thought New Zealand would close their borders?  My family replied in typical fashion ‘oh don’t worry, we will come get you’.  Bless them.  Not one of us knew how serious things were about to get. Later that month security guards started temperature checking us anytime we arrived or left our apartment, and we had to wear masks to the supermarket. At the time I felt quite annoyed, like my rights were being violated.  How stupid was I?

In early March we needed to get our visas renewed which meant leaving Vietnam, and then returning, so we researched the countries, and their virus rates.  We picked Chiang Mai, Thailand as their rate of cases was only about 60.

Chiang Mai was interesting in that there were no precautions from authorities whatsoever. No masks, no temperature checks. The only telling sign was that our hotel was quiet.  The night market, however, was crawling with people.  Europeans.  Thousands of Europeans.  As I bartered to buy a beautiful painting from a lovely local woman, I heard the most awful hacking cough I’ve ever heard in my life. My blood ran cold. The lady and I locked eyes. I stopped bartering, gave her what she wanted and hurried back to our hotel immediately.  We left Thailand and within two weeks their cases of the virus had skyrocketed.

As numbers of the dastardly virus around the world started to explode more countries started closing their borders. Rightly so! Transiting in countries became a big problem and the cost of remaining airlines exorbitant.

The number of emails between my family and I ramped up and most were urging us to come home.

My partner and I had so many discussions about it.  Vietnam had kept the numbers down since January to 150.  It’s now over 200.  They have been stringent, and schools have been closed for over 9 weeks and counting.  We still had employment here and would likely continue to do so for the entire time this virus nightmare lasts.

If we went home, we would be jobless.  We would also be homeless, as I was not about to kick out our renter, who is a Doctor, and whose services to New Zealand will be invaluable at this time.   We would simply be a drain on resources at a time you need it most.  We decided to stay.  I think we would have had an extremely high chance of catching the virus if we had chosen to fly to god-knows-where in order to get home.

We are here for the duration as I don’t see countries opening their borders or transit lounges for a year or more.  I go in and out of sadness about that. I realised I had to get it all out in order to move on and accept my situation.  I wrote a song, walked into guitar shop called Guitar Quang Ninh, met a man who didn’t speak English. Google translate kindly explained what I wanted to do, and we did it. There and then. He was a beautiful human. We are all in this together… No matter where we are. No matter who we are.