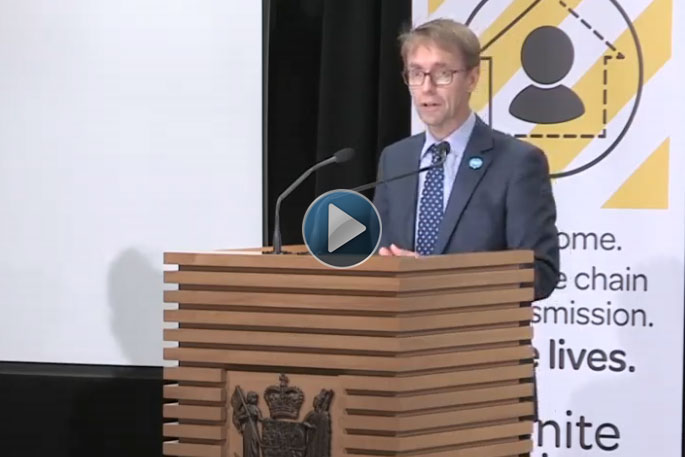 UPDATED: There are 82 new cases of COVID-19 in New Zealand today bringing the total number of cases to 950.

Director-General of Health Dr Ashley Bloomfied says, these cases are made up of 52 confirmed cases and 30 probable cases.

There are 127 people who have recovered from the virus, he says.

The number of people in hospitals with COVID-19 has dropped since yesterday.

There are 10 people in hospital and one person in ICU at Wellington Regional Hospital – all of these patients are stable, Ashley says.

Yesterday was highest single day of testing at 3631, bringing total tests to 33,116, he says. There is now testing capacity for 6000 per day.

He says the number of new cases appears to be levelling off now.

"That's good, it's encouraging but I would want to see probably another two or three days before we would start to know is that definitely a flattening off and then if it was confirmed we would expect then in the coming days that the number of new cases each day would continue to drop."

The Health Ministry is becoming increasingly confident that the lockdown is working, Ashley says

The number of confirmed cases linked to community transmission remains at one per cent, Ashley says.

The three biggest clusters are Marist College in Auckland with 60 cases, Bluff with 55 cases and Matamata with 54 cases.

Fever is no longer a requirement to be tested for Covid-19, testing is now available for people with respiratory problems, regardless of contact with overseas travel.

Earlier: The All of Government COVID-19 National Response will provide an update at 1pm today.

As of Friday afternoon the total number of cases of COVID-19 in New Zealand is 868.

Yesterday a total 71 new and confirmed cases were announced by Director-General of Health Dr Ashley Bloomfied.

There are 103 people who have recovered from the virus, he says.

"There are 13 people in hospital. One person is in ICU. They are all stable."

The BOPDHB covers the western and eastern Bay of Plenty area, while the Lakes DHB covers Rotorua and Taupō.

To break it down further, the Western Bay of Plenty has 27 cases, Eastern Bay has one case, Rotorua has seven and Taupō has four.

Ashley says 49 per cent of the country's cases are linked to overseas travel and 39 per cent have confirmed links to positive cases.

Community transmission is still at one per cent, but Ashley believes this will increase as they continue to investigate the remaining cases.

The number of clusters has risen to 10. Ashley says the biggest clusters are in Auckland with the Marist School cluster of 59 cases; Bluff, with 53; and Matamata, with 49 people.

How many in Tauranga?

How many in Tauranga?