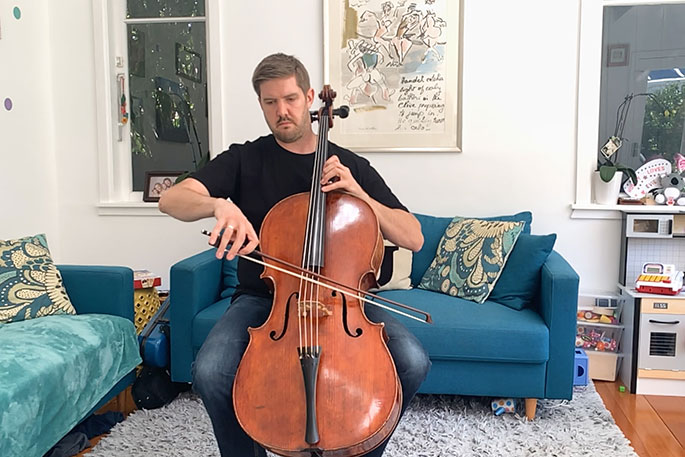 The NZSO debuted its new Play Our Part online series of concerts on March 25 featuring the Orchestra’s players performing works in their homes during the COVID-19 lockdown.

The second free Play Our Part concert will premiere at 7.30pm tonight on nzso.co.nz/live and can be viewed by smart TV, mobile phone, tablet or computer.

Shana, Assistant Concertmaster with the Royal Philharmonic Orchestra, and Ken have played together for more than 10 years.

“We thought we’d have a go at putting the Paganini together from opposite sides of the world. It helps that we’ve performed the duos many times in the past. It is a light, lively piece which hopefully entertains everyone at this time when we are all housebound.”

Along with Ken and Shana performing the first movement of Paganini’s Three Duetti Concertanti, will be four performances by other NZSO players.

Play Our Part’s finale will be a rousing performance of Italian baroque composer Tomaso Albinoni’s Trio Sonata from an arrangement by Douglas Yeo.

Thousands of people have viewed the first Play Our Part performance and the NZSO has upgraded its website after unprecedented traffic for the 25 March premiere.

Along with the Play Our Part series, the Orchestra will present other digital content to New Zealanders during the COVID-19 restrictions.