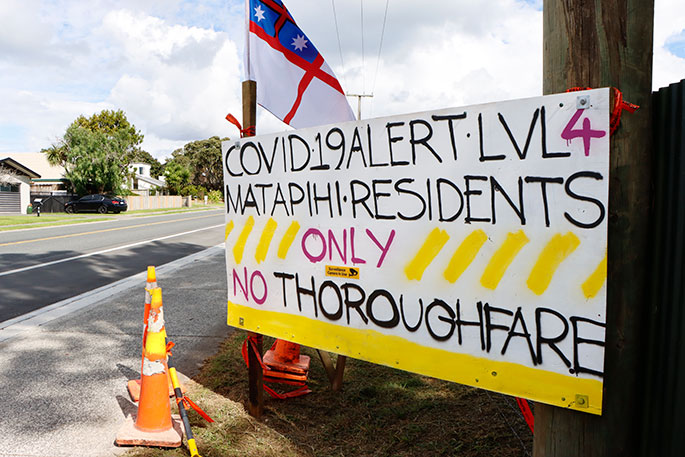 Signs barring non-residents from entering Matapihi have been put up at the beginning of Bayfair Estate and the other at the end of Matapihi Road - right after the footbridge. Photo: Daniel Hines/SunLive.

Cyclists, runners and walkers from other Tauranga suburbs frequently use Matapihi as a thoroughfare when exercising - but concerned locals are saying now is not the time.

Non-residents have been barred from entering the rural suburb while Alert Level 4 is in place.

Large signs reading ‘Matapihi Residents Only. No thoroughfare’ were installed over the weekend at both entry points into Matapihi.

The first sign is at the beginning of Bayfair Estate and the other at the end of Matapihi Road - right after the footbridge.

Tauranga City Council has also announced the closure of the Matapihi Bridge Walkways. This will be closed until further notice to help stop the spread of COVID-19.

A statement issued by council says “with an average width of 1.5 metres, the bridge’s walkway is too narrow for people to maintain the Government advised safe physical distance of two meters”.

“This is about safety, adhering to government guidelines and reducing the risk of community transmission.

“Matapihi is a small community - our greatest fear is that somebody passes away from this and we aren’t able to have a tangi and have whanau around.”

Carlo says a high number of non-resident cyclists, runners and walkers have been making their way through Matapihi since New Zealand went into lockdown last Wednesday.

“What we have noticed is people are not confining themselves to their own communities for their exercise needs.”

More than 25 cyclists tried to enter Matapihi on Sunday in the space of about 40 minutes, says Carlo who was onsite the Bayfair Estate sign at the time.

Both signs remain unmanned, however, the Matapihi community have been encouraged to “kindly remind” non-residents of the suburb's closure.

“All the individuals have been understanding when we have suggested for them to reroute and stay closer to home - no one has responded negatively,” says Carlo.

“Some people are seeing the signs and not turning around - but I think we just need to give them a bit of time to make alternative plans.”

A notice sent out to the wider Matapihi community states that “any resistance can be met with a reminder that these precautions are consistent with Ministry of Health guidelines”.

Non-residents can still enter Matapihi to drop-off supplies to elderly people and carry out other essential tasks, says Carlo.

But his message to Tauranga remains clear. “If you don’t need to be coming through this community, then please don’t.”

“We have had a few people say that they need to bike 30km a day as part of their exercise routine. But hey, we have heaps of stuff we would like to be able to do too - fishing, diving, hunting and whatever else," says Carlo.

“We have to adjust in these times, and hopefully we can get through it quickly so we can get back to those routines.”

Bike Tauranga chairman Kevin Kerr says closure of the Matapihi Bridge Walkways may inconvenience the odd person - but right now is important to look at the bigger picture.

“I understand that Matapihi Road is quite a key route, but if you look at the rules about keeping exercise local, travelling through Matapihi is probably pushing the boundaries anyway.”

There are a number of cycle tracks that are available locally to people, says Kevin.

Western Bay of Plenty area commander Clifford Paxton says they are aware the community is concerned about the welfare of residents and have taken various steps to express these concerns.

“Whilst we acknowledge the concerns, some may, in fact, be increasing the risk of transmission through their communities by not remaining within their homes.

“We are speaking to those involved and encouraging them to abide by the restrictions to ensure the safety of all members of the community.”

Matapihi is not a sovereign State, with a separate set of rules and regulations. People walking or biking for exercise can go in any direction they like and still remain local. E.g. It looks like Bayfair Estate residents are ‘forbidden’ as well going by the location of the sign. I support frustrated essential workers as well. Council are not exercising consistency and common-sense. Otherwise every neighbourhood would be barricaded, since there are vulnerable people everywhere.

Hugh Janis. I based my calculations on 4.75 milion people and 708 people with the virus. i have rechecked my calculations and find them correct. I respectfully suggest you put new batteries in your calculater. If i am wrong i humbly apologise

What is the essential service when blocking a main arterial route such as Matapihi road? Answer, it is not an essential service and is totally illegal morally and lawfully . If the bridge is not wide enough then the Council had better do a stock take of all of their public walkways as virtually none of them will meet their new and totally illegal and illogical requirements. This is bordering on racism and should stop immediately or the whole city may take the same approach and restrict access to every street and as it stands at present nobody will stop them.

You can suggest and recommend but you cannot legally prohibit access to a public thoroughfare. Most people will accept the message and stay away. The virus cannot be transmitted by people riding a bike through your vicinity, even if they were infected. You get it by touching your face after you have prolonged contact with an infected person. It enters through your eyes, nose, and mouth and moves to your lungs. Hence the stress on keeping your hands clean and NOT touching your face. (If you really can’t break that habit, then wear a mask; it won’t stop the virus but it will prevent you touching your face...)

the percentage of people that have had or have the virus in nz is 0.01490526% of the total population

1) You’re allowed to leave your bubble/community for essential services during lockdown. 2) Correct channels were followed by liaising with both the Police and local council prior to the sign being erected 3) The local community are not responsible for the bridge being closed - prior to TCC closing the bridge access for essential services e.g frontlines, was supported. What exactly are everyone complaining about? You’re meant to be in lockdown anyway

I, like many of my colleagues, use the bridge as a safe commute to work via bicycle. Are we now forced to use a less safe (and longer) route or will there be an allowance for frontline staff?i

Let them out either!!! Can anybody call Council and get their street closed if they feel there are to many people using it. For example Gravatt Road or Maunganui Road. Whats the difference? What sort of bubble are the residents of Matapihi in when they can all get together with the Council to arrange this farce? Did the Council agree without consultation and observation? It’s proving that if you work for Council you can expect to be able to manipulate the processes to your own benefit and ignore who is actually paying for these extra privileges.

What about essential services whom use the bridge to get to work ?

Thats fine as long as you stay in . Works both ways Matapihi..