‘Residents only’ in Maketu 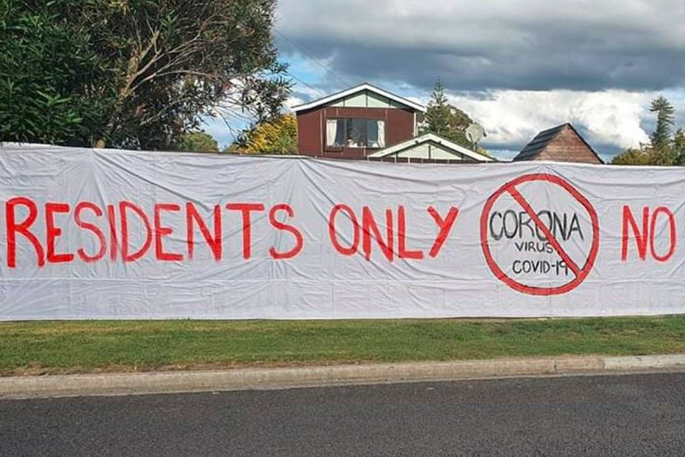 Caption: Signs at the entrance to Maketu make it known it's locals only. Photo: Stuff.

It's "residents only" in the beachside Bay of Plenty town of Maketu according to a makeshift blockade that has popped up at the town's entry.

But some locals are concerned those people behind the moves protect the community from the spread of Covid-19 are flouting the lockdown rules themselves.

Signs were placed outside properties at the entrance to Maketu, east of Tauranga, late last week and sport the messages; 'Residents Only', 'No Tourists allowed'.

Stickers emblazoned with 'Maketu Resident' have been printed as a way to identify resident status.

One resident says the signs are to deter any non-residents and tourists from entering the town as tourists had the potential to spread Coronavirus.

The signs are seen hanging from one property at the entrance, and placed on powerpoles alongside road cones, but are unmanned.

Those behind the moves say it's intended to protect all of the local, vibrant community of Maketu and it's vulnerable residents from the spread of the virus.

Maketu is long known as a popular spot for tourists and people undertaking seasonal kiwifruit picking work or travelling through the area and freedom camping at the local beachside.

But under the lockdown, this is not the time for travellers to be coming into the town, says the person, and locals want to protect residents from any potential spread.

But another local raises concerns about a gathering at the fish and chip shop which they say had a "courtyard drinking session" on Friday night, with cars seen coming and going until 11pm.

This gathering was "breaching isolation rules", the person, who wanted to remain anonymous, says. Under Level 4 regulations all takeaway outlets are to be closed.

The concerned person says what they saw is contrary to what the signs were purporting to do and was a "hypocritical approach".

The person urged them to "Walk the talk" and protect the community by abiding by the lockdown rules.

"This is the paramount concern. People should not be congregating outside of their bubble or partaking in leisurely activities like fishing. We need to be consistent with the rules as we are all part of it."

But another resident says those congregating at the fish and chip shop were doing so "within their bubble".

Police confirmed in a statement they were aware of the potential blockade at the entrance to Maketu.

"Police heard word of such a thing a couple of nights ago and attended, and spoke to people at that location to give them advice on the Alert Level 4 restrictions," police said in a statement.

"There has been no more action by police."

Police were not aware of any callout to the Maketu Takeaways on Friday night, the statement said, but urged anyone who suspects people are flouting the lockdown restrictions to use a new online form at www.105.police.govt.nz.

"We are continuing to take the approach of educating and informing people of their responsibilities in the first instance, but we will not hesitate to take enforcement action if people continue to ignore the restrictions," says Police Commissioner Mike Bush.

Maketu Fire Chief and long term resident Shane Beech had seen the signs during several fire callouts but says they were not manned.

"We get a lot of freedom campers this time of year and seasonal workers for the kiwifruit season so there is some concern from the locals as to where these freedom campers are going to park up for the night. I think it is some concerned locals who are mindful of the transit of tourists that come into the area."

Overall he said the community was being compliant with the lockdown rules. The beachside carpark was almost empty except for the odd person taking their dog for a walk, and a few boats that went out a few days ago.

"Ninty-nine per cent are compliant."

While I understand their feelings and those of the posters here, this is NOT a time for Kiwis to be looking for division. Don’t let fear drive your attitude to one of xenophobia. If a stranger is in your neighbourhood, it is most likely because they have some very good reason to be there. People are not just generally travelling at the moment. We need to be supporting each other, not excluding (any more than we HAVE to...)

no private person has the right to block a public road

So they will also stay local and not come into Te Puke? Or is it one rule for them and one for everyone else?

As long as they stick to their own rules and don’t leave Maketu.

Should be residents only in Tauranga too

Roadblock at top of Kaimais, at Wairoa River and Papamoa should sort it out.