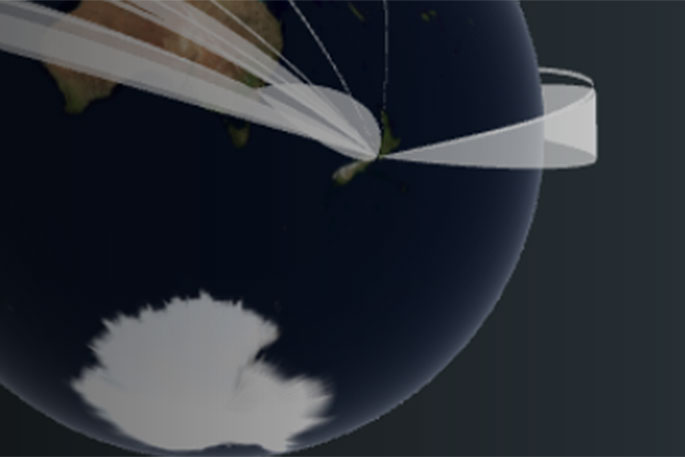 People who have tested positive for COVID-19 in New Zealand arrived here on flights from more than 20 countries.

New Zealand's borders have been closed to everyone except New Zealand citizens and permanent residents for more than a week, and airlines have slashed routes flying here.

But case details provided by the Ministry of Health show New Zealanders and travellers now testing positive for the virus brought it back from all over the globe.

You can use your mouse or keypad to turn the globe below, or zoom in on a region.

More positive cases have arrived from the United States than anywhere else, on flights to New Zealand from Houston, New York, Los Angeles and San Francisco.

Confirmed cases in the US are nearing 66,000 - the third-highest in the world behind China and Italy.

Many other people who tested positive came to New Zealand through the Middle East - Doha in Qatar, or the Emirates cities of Dubai and Abu Dhabi.

However, many of those travellers transited the Middle East from other locations - often Europe. Spain, Switzerland, the UK and Denmark marked some of the starting points for long journeys back to New Zealand, some transiting through as many as four cities to get here.

Flights from Australia are the third-largest source of cases. Only a few trans-Tasman services are still operating.

With opportunities to fly back home dwindling for New Zealanders overseas, researchers and health officials now expect to see more new cases from community transmission, rather than returned travellers.

Kiwis should have been given 2 weeks to get back before the borders closed and then that’s it.....no one in regardless of nationality. That is the only way the spread of COVID-19 will slow then stop.