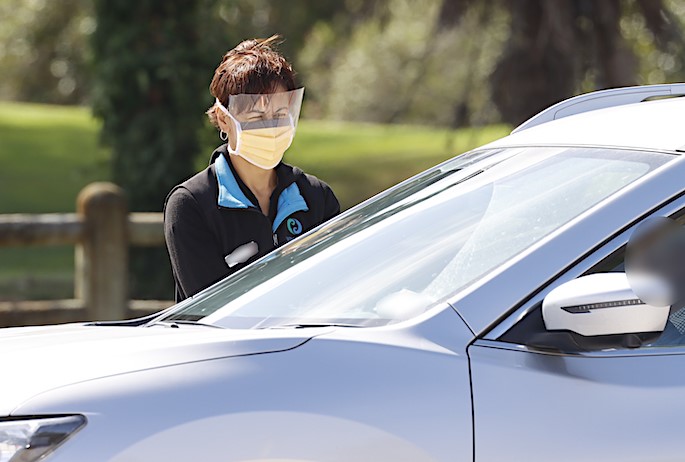 A testing station has been set up at the Tauranga Racecourse.Photo: Daniel Hines/SunLive.

Lucy Zee was recently tested for coronavirus and her results are due to come back in the next few days.

"If the test comes back negative, then it eliminates my flight having coronavirus and gives health officials more information on this and, if it comes up positive, there's nothing I can do but try to get through it," Lucy says.

The video producer has been in self-isolation since March 11 after returning from Melbourne. She had no symptoms but developed a tickle in her throat and chest pains on Sunday.

"I was cleaning out my room and there was a lot of dust and I was thinking about the sick lady I was sitting next to [on the plane]," Lucy says. .

"As I thought about it more, I thought 'oh shit, that lady was pretty sick'."

She contacted Healthline on Sunday evening and spoke to a nurse who encouraged her to get tested, especially when Zee told her about the person she sat next to.

After flying from Melbourne to Auckland, Zee went back home to Tauranga and was supposed to go back to Auckland to start a new job.

She made the decision to self-isolate early on, as cases in Australia at the time were on the rise.

"I haven't really shown any symptoms and didn't want to clog the system or use up a test kit but the nurse on Sunday said the more information they had, the better."

By Monday Lucy was booked in for test in Tauranga. Driving up to the community testing facility she was greeted by a nurse in a white hazmat suit, an acrylic face mask and gloves.

"She was very lovely and had a sense of humour and told me the test was going to feel really uncomfortable," Zee said

In the car, Zee had both her nostrils swabbed and a throat swab.

The nose swab was like being scratched somewhere you should not be, she said.

The swab, which Lucy got a glimpse of before closing her eyes during the test, was in a plastic sealed package - it was thin and the "length of a chopstick".

"It was a sharp, burning pain that made my eyes water and it definitely felt unnatural," she says.

"It was a scraping feeling but when the nurse took it out, the pain went away immediately.

"The pain is so temporary and I definitely would rather do this again twice than a Pap smear."

Although Lucy arrived before the Government asked travellers to officially self-isolate for 14 days, she did not think people should take advantage of what might be seen as a "loophole".

"Even the slightest chance [of having Covid-19] should be more than enough to feel like you are a danger to people who are older or immunocompromised."

Community testing facilities have been set up all around the country as cases in New Zealand continue to rise.

A Ministry of Health spokesperson says all district health boards have plans in place for activating community based assessment centres, and can activate these plans in just 24 hours.

The centres "are designed to take the load off general practice teams and emergency departments and reduce exposure risk for healthcare workers in other walk-in care locations".