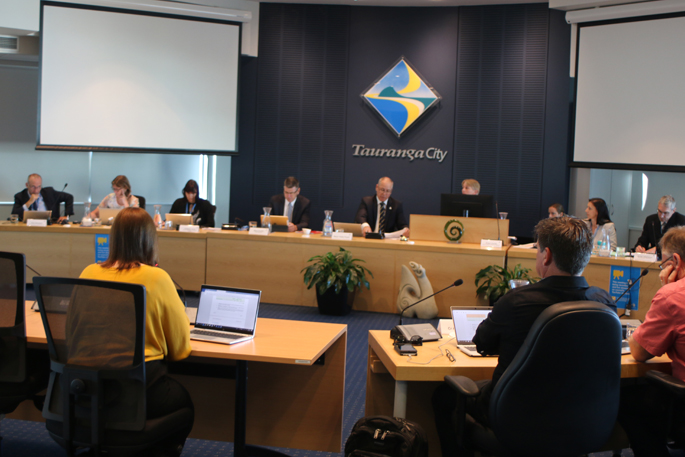 Tauranga City Council has decided to cut a proposed average rates rise for 2020/21 in response to the coronavirus pandemic.

At a council meeting today the mayor and councillors unanimously agreed to consult with the public on a draft Annual Plan budget that would see a 7.6 per cent average rates rise for the year starting July 1.

Three weeks ago, the council had voted to consult on a draft budget with $244 million in capital expenditure with a 12.6 per cent average rates rise. This budget had been aimed at building infrastructure to help our city grow while starting to address council’s debt levels.

Mayor Tenby Powell says the world had changed during the past three weeks, and the council’s top priority now was to help the people of Tauranga through the developing crisis.

“The current circumstances are unprecedented, and our focus must be on our community before all else.

“It is also extremely important that we communicate and consult with our community about this new plan before we make a firm decision.”

The owner of a $1.07 million median-valued commercial property would pay an extra $12.13 a week in rates.

During the meeting councillor Steve Morris said he still feels the rates rise is too high and he hopes the 7.6 per cent proposal is a ceiling rather than a floor.

Councillor Dawn Kiddie agreed saying, she wants people in the community to know this is still a proposed rates rise and would not support any resolution as definite because of the unknown factors the lockdown will place on the rate payers and businesses.

Among other resolutions, the council decided:

• to reduce the commercial differential from the earlier-proposed 1.3 to 1.2. This means that owners of commercial properties would pay $1.20 for every $1 of general rates paid by owners of residential homes of the same value

• to propose a Uniform Annual General Charge of 10%. This is lower than the 15% included in the Long-term Plan 2018-28, and is intended to reduce the rating burden on lower-valued commercial and residential properties

With coronavirus in mind, the council also approved a clause that would allow flexibility to consider other options for the commercial differential and UAGC before the final annual plan is adopted in June.

Public consultation had been scheduled to begin tomorrow, but is likely to be delayed for a short time.

The council will also consult on user fees, the draft Development Contributions Policy and a change to its Revenue and Financing policy.

All council and committee meetings have been suspended except for the Civil Defence Committee and the Emergency Committee that was activated today.

… on rates is a move in the right direction. Makes me wonder why this couldn’t have been done in the first place, though? And it is still more than 3x the rate of inflation...

The economy is taking a dive and will not come up for air for some time . The council members are getting more out of touch than ever. Surely everything needs to be scrutinized and core business take priority. Seems their are projects that need to be mothballed so costs can be kept to a zero increase at the very least. There will be a lot of businesses and ratepayers that are not going to financially survive so it is really a slap in the face to talk of increasing rates.

The Council will be on half duties for the next month at least but wants even more rates from us. Meanwhile many of their businesses will go broke in tourism and hospitality in particular. This is what happens when there is a leader with pre designed and one eyed outcomes and inexperienced sheep as followers. To think they believe we should be grateful for a rates increase only 4 times inflation!

Councillors asleep at the wheel

The economy is going to be hit hard and fast. Central government understand this by immediate billions of dollars relief packages.Tourism, hospitality all stuffed, retail have long suffered. Our Councillors acting as systems normal. Mayor Powell’s election campaign implied raising revenue by other means other than rate increases. Time to deliver Tenby.

The mayor and council live in lala land.This pandemic will affect everyone massively, both financially and emotionally. The world will take a long time to recover from this recession, as has been noted by more informed people. The economy is like an oven, not a light switch. It will not kick start immediately after the lockdown. Ratepayers, both businesses and residential, will be lucky to be able to pay rates at the existing levels. Maybe the council should drop its wish list, and focus on reducing its costs.

They should stop all work in wharf st and elizabeth street,as no one will be able to afford to go anywhere after all of this stuff,bringing the Farmers back will make NO difference, this will BUCKLE everything,NOW, TCC should now get rid of all the DEADWOOD now this has hit DO NOT NEED 650 staff all should be let go,and re apply for work,(i think) there would be some still there clinging on to (POWELL) TO KEEP JOBS, Hobbiton let go 500 staff,SO should TCC, ALL THESE PEOPLE COULD GO TO WORK IN packhouses to take up the need,my thoughts only, Thanks Sunlive,keep up the BEST NEWS, Thankyou,10-4 out phew.

Only 7.6%. Thanks for helping me through the ensuing financial doom. Ngatai Rd looks great. Complete waste of money but looks good.