Looking after the pennies 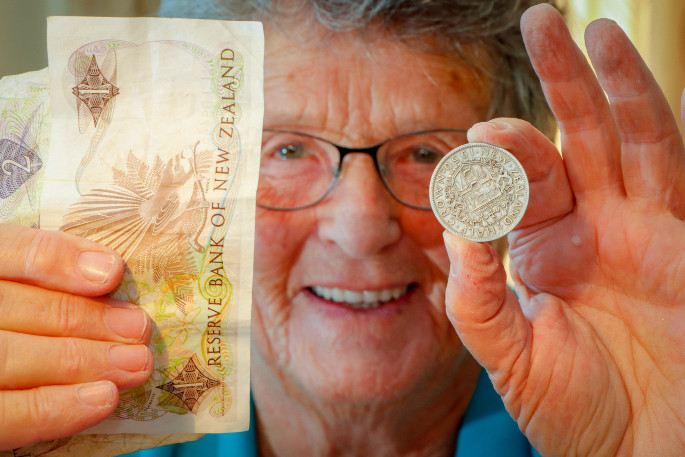 Look after the pennies and the pounds will look after themselves, as the saying goes. Alison Becks would definitely fall into that category, pictured here holding up some of the notes and coins she has collected.

There’s a big 2/6d glistening in the pile, a two shillings and sixpence, a half crown.

That was enough to buy a pack of 20 Matinee ‘extra douce’ fags back in the day, or two centre-stall movie tickets. That was pre-Decimal Currency Day, Monday, July 10, 1967.

But this would be a foreign language to anyone under 50. There’s also a bag of thrupenny bits, or three pences, tiny silver coins. You could buy a licorice strap and five aniseed balls with one of those in the 1950s. Grandma Miles would scrub a hand full of thruppences and hide them in the Christmas pudding.

There’s also a few shilling coins, 1/-, 12 pence, a bob, one twentieth of a pound – ten cents in real money terms. That would have bought a pie and a cream bun at Riselaw Road School in the late 1950s.

“The coins come out of top drawers, the forgotten change jar at the back of the cupboard, from estates, from behind the cushion on the couch,” says the Lion.

“It’s money people don’t want. And we give it value again.”

Collecting coin may seem small change, but it’s all about scale. In small quantities they’re not worth… well, tuppence. Except to a numismatologist, a student or collector of coins, or the Reserve Bank may pay out their face value.

But coins are big business for the Lions. Money creates money.

For example, up and down the land last year, Lions collected 339,821 coins weighing 1,670.286 kilograms and 3679 bank notes. Total value $40,478.92… so far. Because the Lions also dispatched a crate containing 500 kilograms of unwanted coins to a foundry in Australia. They’re still awaiting a credit for that.

And every year that money is pumped into the Lions Club’s Heads Up for Kids project – a project that provides a helping hand for young people to engage in an experience or activity that will enable them to live a dream, set some fife goals, and reach their full potential.

More than 100 you people have received scholarships to organisations such as Spirit of Adventure and Sir Edmund Hillary Outdoor Pursuits Centre.

“It’s just lovely to be able to help a kid who, otherwise, might not have got the chance,” says Alison from behind her pile of coins.

She’s playing teller – counting and sorting the coins into bags. Bag one – New Zealand and Australia copper one and two cent coins. Bags two through five are for New Zealand silver 5,10,20 and 50 cent coins. And so on.

No bag for the coin with a hole though – probably a Japanese five or 50 yen coin. Both pretty much the same size although the 50 yen coin has the reeded or grooved edge. So Alison Beck’s task does have its interesting moments.

There is also a Fiji 50 cent coin. “On its own not much good, but because we’re collecting coins, there’s a good chance we will find 50 of them. The Reserve Bank pays face value and that gives us another $25 for Heads Up for Kids. In turn the bank sends it back to the country of origin.”

It’s not a finite fundraiser, not yet, not by a long stretch. The Reserve Bank estimates there is $80 million in old decimal and pre-decimal New Zealand coins and old bank notes unaccounted for. In ten years of the Heads Up for Kids, the Lions have scrimped, scrounged, collected and recovered $591,100 of it, but there’s still a lot of obsolete currency which is no longer legal tender, out there in the market place.

You can help. Alison says there are big Resene paint tins in the BNZ bank in 13th Avenue and Greerton, Westpac in Greerton and the ANZ at The Crossing. Drop by with your old coins. Put them to good use.