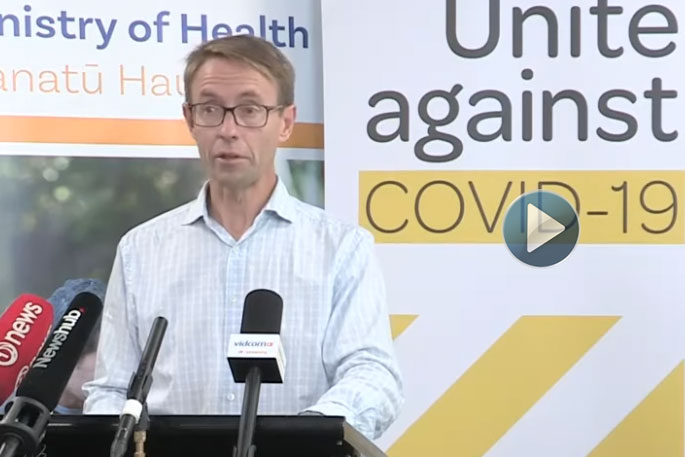 There are 36 new cases of coronavirus in New Zealand, as of 8am today.

This brings the total number of cases in the country to 102.

The Ministry of Health's Director-General of Health Dr Ashley Bloomfield will provide an update to the media on the national COVID-19 response at 12.30pm today.

He says more than half of the cases confirmed have clear links to overseas travel.

"Most are close contacts of a confirmed case.

"There are two that there is no link to where it has come from and is being treated as community transmission."

Ashley says Prime Minister Jacinda Ardern will be delivering an update on the country's alert level later this afternoon.

More than 7400 tests have been carried out so far.

As of Sunday afternoon, there were 66 cases in New Zealand, one confirmed in Tauranga. This has now jumped to 102 following Ashley's announcement this afternoon.

A Bay of Plenty man in his 30s who recently returned from the United States on March 17 is the first Tauranga person to test positive for COVID-19.

The Director-General has announced the case is amongst the 14 new NZ cases of COVID-19 confirmed today by laboratory testing, bringing the number of confirmed cases in NZ to a total of 66.

“The locations are Auckland – five cases, Northland – one, Canterbury – one, New Plymouth – two, Waikato –three, one in Tauranga, and one in Dunedin.”

Ashley says that the COVID-19 Alert Level remains at Level 2.

The Prime Minister is expected to make an announcement on the alert level later this afternoon.

“You will note that from the presentation the Prime Minister made yesterday that as part of Alert Level 2 we are asking people with pre-existing conditions such as chronic respiratory disease which might include severe asthma, bronchiectasis, chronic obstructive pulmonary disease; and people who are immune-compromised or if they are having cancer treatment, to remain at home.

“A message to the over-70s – many of you are fit and healthy, and living active lives, but the older we are, the less our immune system is able to fight off this virus and indeed other infections, and we have seen from overseas that older people are at more risk of serious complications. So we are strongly urging you to be aware of the need to stay at home and not to have contact with others,” says Dr Bloomfield.

“Please do adhere the advice to stay at home. Ask friends and families, particularly your children, not to visit. For the meantime this may mean talking to your family on Skype or other methods.” 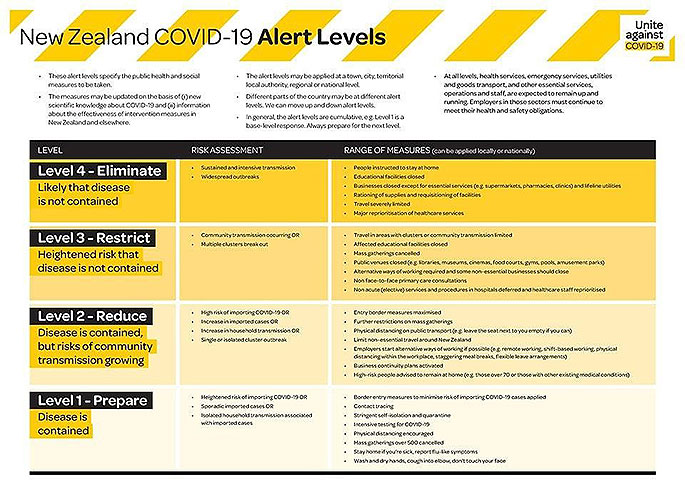 Earlier on Suday, Finance Minister Grant Robertson said the government would move to the next two phases of the Covid-19 alert levels, if yesterday's two confirmed cases were proven to be the result of community transmission.

A level 3 alert status recognises a heightened risk that the disease is not contained and demands that authorities further restrict travel and public gatherings.

A host of public venues would face closures, including gyms, libraries, museums, food courts and pools.

Some non-essential businesses would face closure too.

Ashley says Healthline is overloaded and he pleaded with people to use it properly. It’s not there to give general advice, nor to offer information about self-isolation, he says.

Current Cases of COVID-19 in NZ: