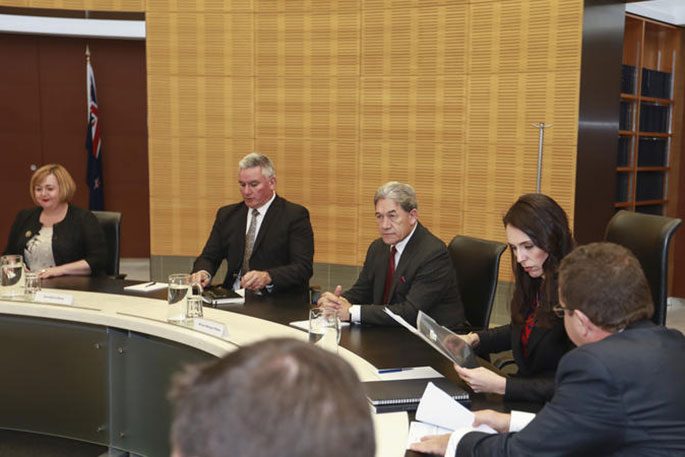 File photo of ministers meeting at the Beehive. Today only 10 ministers will be in the Cabinet room, the other 10 will patch in via video conferencing. Photo: RNZ / Rebekah Parsons-King.

Cabinet ministers will put into practice 'physical distancing' in their meeting this morning as they grapple to get a hold of the COVID-19 crisis, with half dialling in via video-conference.

Parliament's powerful cross-party Business Committee will also hold discussions this week to determine how Parliament should operate at each alert level - including how many MPs to allow in the usually sardined debating chamber.

On Saturday, Prime Minister Jacinda Ardern signalled she would make changes to the way Cabinet met to ensure it stayed in line with the government's advice.

"I do want to start mitigating risks by breaking down the number of Cabinet members who are physically in the same space together at all times."

Ten ministers will meet in the usual Cabinet room in the Beehive on Monday morning; the other 10 will patch in remotely from their offices.

All MPs have been told to limit their domestic travel during Parliament's recess this week, with most based in their home electorates away from the capital.

The Environment Select Committee is expected to meet using Zoom video-conferencing after MPs were - for the first time ever - given permission to meet virtually.

Speaker Trevor Mallard will also chair a video-conference with the Business Committee to develop a plan for Parliament based on each COVID-19 alert level.

Parliament last week gave the committee the power to drastically slash the number of MPs required on the premises.

People were seen in the debating chamber with tape measures on Friday, determining how many MPs could fit while maintaining a safe distance from one another.

"It's not going to be acceptable to have 120 people in the same chamber at one time, because that automatically puts us over the limit [of 100 people for indoor events].

"We're going to have to be careful because MPs could be quite serious vectors ... if we keep moving into groups and then moving out into the public."

Hey that’s a good call. They should definitely be considering it. Why don’t you submit it to them. Good stuff.

Why don't they restrict their travel all the time?

Probably because it would lessen their airpoints for that overseas holiday? That aside politicians and business leaders should be using video conferencing anyway. After all, it is a climate emergency too.