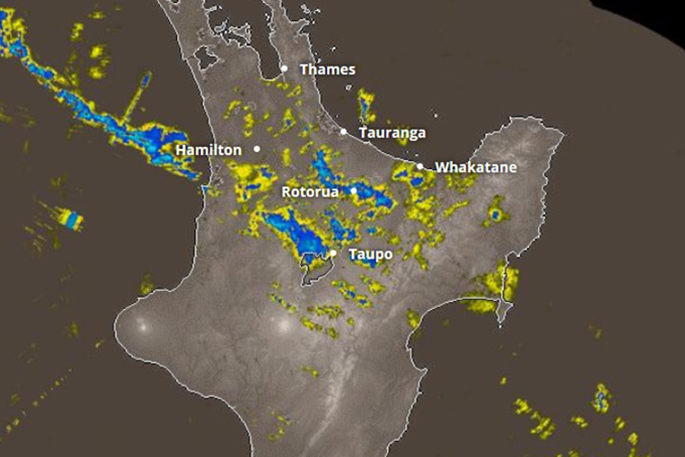 The MetService advise that southwesterlies over the country should be easing during Tuesday as a ridge of high pressure moves onto New Zealand from the Tasman Sea.

“The ridge then moves over the North Island on Wednesday with a northwesterly flow developing over the South Island,” says a MetService spokesperson.

“On Thursday, a front is expected to move north across the country from the southwest, bringing a brief period of heavy rain to the west coast of the South Island.

“It is followed by cold southwesterly winds.

“There is low confidence that rainfall accumulations could reach short-duration warning criteria in Fiordland during Thursday.”

A severe thunderstorm watch is in place for people in the Waikato, Waitomo and Taumarunui districts.

“A front lies over the western parts of the central North Island today, bringing rain and isolated embedded thunderstorms. There is a risk of high hourly rainfall totals of 25-40 millimetres per hour, due to slow moving narrow bands of rain this afternoon and evening.

“Rainfall of this intensity can cause surface and/or flash flooding, especially about low-lying areas such as streams, rivers or narrow valleys, and may also lead to slips.”

Motorists are warned that driving conditions will also be hazardous with surface flooding and poor visibility in heavy rain.